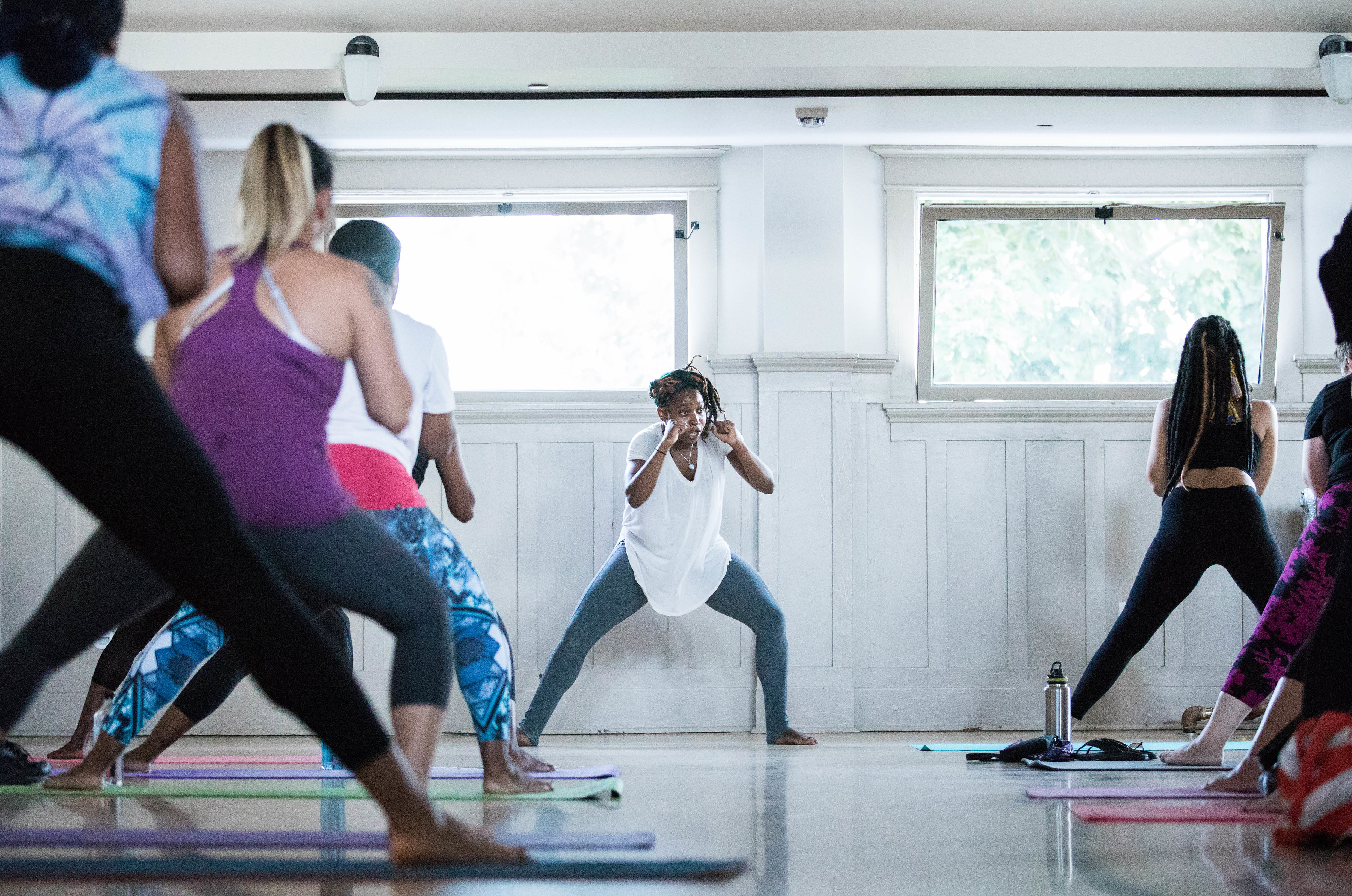 The Trap Vinyasa™ yoga class bursts into a spontaneous call-and-response led by our instructor, Abiola Akanni, as we flow into a twerking sequence. It’s a chorus that perfectly encapsulates the class’s philosophy. Sweat drips down my forehead and stings my eyes as I attempt to mimic Abiola’s hip undulations while balancing on the balls of my feet. The heavy bass beats of Cardi B pump through the steamy room filled with 16 other happy, but somewhat exhausted, students.

This isn’t just any yoga class. Trap Vinyasa™ is a philosophy of movement and mindfulness developed by Abiola, an Atlanta-born daughter of Nigerian immigrants, to make yoga more accessible for wider communities, like people of color or those who identify as “other.” But in order to fully understand it, you have to understand Abiola, whose troubled past inspired her to bring yoga to the communities that need it most.

Although Abiola grew up participating in family activities, like traditional West African dance, she was also known as the black sheep of the clan. Atlanta’s trap culture intrigued Abiola, and even after she moved at age 11, the culture still heavily influenced her. She loved the openness of street culture and how it always made her feel like she could be herself. This non-judgmental mindset became a significant part of her yoga philosophy. “One thing that I am deeply grateful for is the acceptance I felt with people—pimps, strippers—who were marginalized by mainstream society,” Abiola explains in her class introduction. “I always respected their grace in accepting people for who they are, and their lack of judgment.”

The lifestyle took its toll, however, when she began associating with escorts, pimps, and dealers and struggled with mental illness and drug abuse. When it got to be too much, Abiola turned to yoga. She completed yoga instructor certifications and started teaching her own classes, but there was still something missing. “People just wanted to come in, practice, and then leave. I wanted to discuss philosophy, people’s experiences, and have some deeper connections to my students.” Abiola wanted to create an intentional community with her yoga classes, rather than being just another item checked off of someone’s to-do list.

At about this same time, Abiola started practicing yoga infused with music and dance in her living room. “I started to flow to different types of music. Soul, deep jazz, hip-hop and trap, some West African music. I started to add different flourishes into the sequences, different dance moves, different hip undulations, a little bit of West African dance. I wanted to find that fluidity and a sensory experience. I added athletic touches in there too with boxing.”

Her friends joined in the community room of her building to practice, and Abiola soon realized that she wanted to take her trap-inspired yoga flows beyond her friend group. When she started renting larger spaces in the South End, most of the people who came to her classes were new to yoga, but they continued showing up. She finally got the community she was yearning for.

Abiola re-creates this intentional community at the beginning of each Trap Vinyasa™ class. When I attended, she first instructed students to introduce themselves and get to know each other. Then, once everyone is seated, Abiola explains the history of Trap Vinyasa™, including the pain, mental illness, and drug abuse that she endured on the road to developing it. Her vulnerability creates a space for students to feel comfortable with their bodies.

The warm-up consists of abdominal exercises and structured breathing to a background of calm music that builds focus. Then, Abiola turns up the volume with hip-hop tracks and sequences that alternate between yoga poses, boxing, and twerking. One of the best parts of the class includes Abiola’s coaching on how to tilt your pelvis to get the most effective booty pop. The boxing sequences interspersed between twerking and asana poses are what really get the blood pumping as she guides you through squats and throwing jabs and punches.

Abiola’s calm guidance centers the last 10 minutes, when students unwind into a yoga nidra with soft music, child’s pose and stretches that feel incredible after the heat-building, pulse-pounding 45 minutes of dance, yoga, and boxing.

All the sweat, music and booty popping serve a larger purpose of breaking cycles of body dysmorphia and encouraging people, especially women, to engage with their bodies as sensual objects. “When I started practicing yoga one of the things they acquainted me with really quickly was sensuality, which was new for me because I had always only identified my body as sexual,” remembers Abiola. “So, just the awakening of sensuality and learning the ownership of my body and receiving that power was really profound.”

Abiola also hopes that her students gain a similar kind of appreciation for the light and dark sides that constitute their being. “I want my students to give themselves the grace to receive that they’re both light and shadow, as opposed to constantly negating and deflecting a huge part of who they are because of what society says is good or bad, right or wrong. That’s the most liberating thing that happened in my life was when I began to transcend that; to allow myself to identify beyond those standards because there was so much shame acquainted with my body.”

Looking to the Future

Now that Abiola has found her community within Trap Vinyasa™, she’s looking towards big changes. In the fall, Abiola will be rebranding her classes as Diamond Body Vinyasa, which is a tantric term that translates to “reflecting true awareness.” It’s cultivated through a hatha practice that uses the heat of the breath to cleanse and purify the body.

Expecting her practice to expand with this rebranding. Abiola wants to train black teachers from urban areas who understand the culture and know how to hold space for those communities. “I see us being in community centers all over the country,” she says. Abiola also envisions Diamond Body Vinyasa hosting retreats in other parts of the country and even the world, including her parents’ homeland Nigeria. “I see us breaking into the fitness area and bringing mindfulness into that as well,” Abiola muses. “Doing collaborations with Nike and Adidas, bringing yoga fitness to new places but also bringing mindful fitness to these places. Letting people have an emotional connection to their body while they’re moving their body. I see it being a global fitness brand.”

For now, you can join Abiola and the rest of the Trap Vinyasa™ tribe at the Mt. Baker Community Center every Thursday evening.