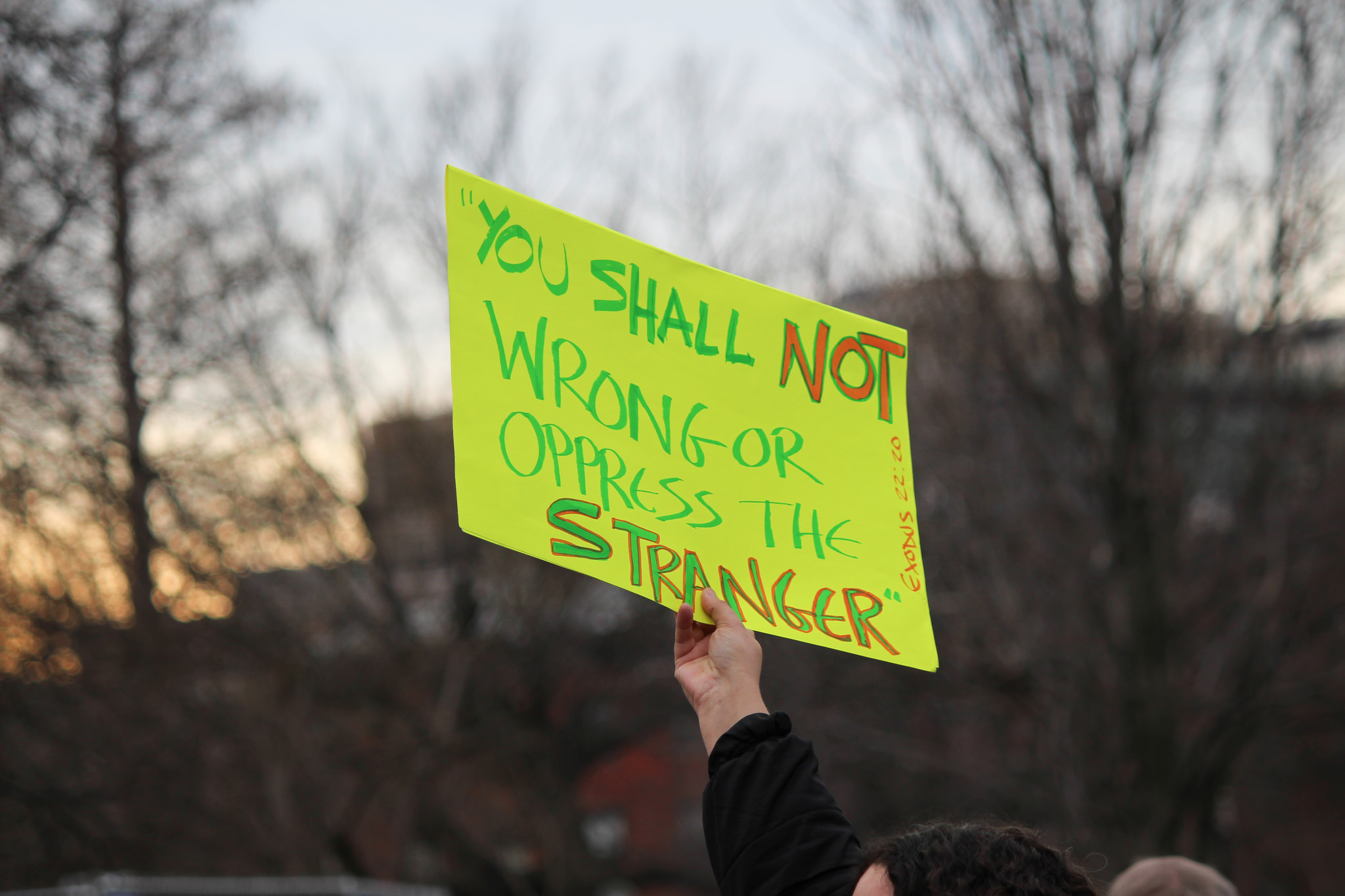 So much of the rhetoric surrounding those attempting to cross US Borders has sought to criminalize them rather than to contextualize what is happening in the countries from which they are seeking asylum. This isn’t an accident.

Corporate interests to expand our ever growing privatized prison system has given us a voracious appetite for consuming our own and others. As for the mainstream, it seems we’d rather not know. Somehow we assume it easier to metabolize a steady diet of narratives that absolve us from any complicity or responsibility rather than face the truth. When it comes down to border crisis,  this country can’t claim innocence. In fact, we are the reason many of them are here.

And when I say we, let me be clear – because while I am an American, as a Black, queer, woman, these are the very same oppressive tactics that have been used to suppress the communities to which I belong, fueled by anti-Blackness. I stand in solidarity because I must. I understand that my liberation is tied up in the fate of those immigrant families.

What follows are a few efforts that the US has led to destabilize their homelands, helping to create the conditions for these mass departures. This list is not comprehensive, but focuses on the places from which most immigrants coming to the US border are fleeing: El Salvador, Guatemala, Honduras, Mexico, and Nicaragua.

The civil war in El Salvador in the 1980s was largely one of farmers and working class folks trying to gain higher wages and better working conditions, not to mention protections against a harsh government that favored the wealthy (Sound familiar?). Much of the working class was repp’ed by the Farabundo Marti National Liberation Front (FMLN). To suppress the voices of the poor, the US backed, trained, and armed the El Salvadoran government for a war that resulted in a massacre of more than 70,000 people, with the government being responsible for 95% of those deaths. It is this war that forms the basis of the tenuous conditions in the country today, and for its internally displaced population. Today, El Salvador has high rates of violence in the suppression of its justice seekers and gender based violence making it one of the most dangerous places for girls and women in the world.

Ah well, that’s just how we do.

We make our landing into Guatemala in 1954 with our CIA launched effort to remove Jacobo Arbenz, the second democratically elected President, after he was successful in passing the Agrarian Reform Law, which distributed unused land larger than 224 acres to peasant farmers, and compensated them for their stewardship over that land with government bonds. More than 500,000 aided by his program, many of them indigenous folks who had been “dispossessed” after the Spanish Revolution. Yeah…we didn’t like that. The “United Fruit Company” (think bananas and canned fruit – you’ll learn more about them under “Honduras”) lobbied to have him overthrown. And the US didn’t disappoint. We installed Castillo Armas, a mercenary who had a history of doing our dirty work for us, instead. 40 years of civil war followed with over 200,000 (mostly indigenous) people killed.

Starting to be a running theme here, huh?

Honduras really hasn’t had a stable government since it gained independence in 1840. Power has passed from dictator to dictator, all the while it has been engaged in conflict with its neighbors Nicaragua, Guatemala and El Salvador.

Remember when I mentioned United Fruit Company? They’re back! As early as the 1930s, they not only own half of the land in Guatemala. They own 10 percent of the land in Honduras, adding to a total of 3.5 million acres in Central America. For more than 40 years they control many of the railroads, land rights, and agricultural systems.

In the 1970s, when overcrowding in El Salvador means that Salvadorans start migrating to Honduras (which is five times bigger), it results in tensions between the two countries and between the wealthy and peasant classes. In 1974, newly installed President Oswaldo Arellano, in an effort to aid Honduran people, returns expropriated land from United Fruit Company back to the peasant class, stating that it had been given under dictatorship. United Fruit Company, lobbied the US government to intervene, and of course…how could we not? We pushed Arellano out as soon as we could and installed a puppet.

Honduras became a proxy US wall against communist encroachment in the region in exchange for money from us.  Thousands of environmentalists and activists have been killed, silenced, or detained to eliminate them as subversives. The coup of 2009 was a continuation of that sentiment which led to the murder of many of its journalists and union organizers.

It’s no secret, the US likes its drugs. We are the world’s biggest drug consumer. And where do we get them from? Mexico -at least it’s a huge point of entry (I’m slipping it in here that the legalization of marijuana in the US would reduce some of that demand from Mexico). May sound like the best argument for a wall that you’ve ever heard, except that we were also responsible for training the greatest drug cartel in Mexico’s history. They started as a paramilitary force trained right here in these United States. Profits are estimated to be between 19 and 29 billion dollars a year. While the price of cocaine has gone down considerably, our spending on the “war on drugs” has gone up. You know why? We have military ops on both sides doing plenty o’ dirty work. And that’s how we like it. We spend billions of dollars a year, in our media friendly “war on drugs” and it hasn’t really helped one bit.

But, what is has done is turn the appetite for drug gangs, in an effort to meet supply and demand onto Mexico’s civilians. Sons and daughters are being forced to participate or suffer execution, and you wonder why we have mamas and babies at the border.

Anastasio Somoso ruled Nicaragua like a pimp for 43 years with unconditional support from the US. I’m talking killing, raping, torturing the people of that country with complete impunity. The minute the Sandinista Revolution overthrew him in 1979, and began implementing a government that centered the poor, we were ready to throw down. The Sandinistas ruled with a focus on making sure that everybody could read, had adequate healthcare, understood government, and promoting gender equality – social programs at their best.  But alas, here comes the CIA courtesy of Ronald Reagan to save the day, or rather destabilize any efforts of the Nicaraguan people to democratic process. We mined their ports until they were bone dry. And when we were ordered to pay reparations, we were like, “Nah, we don’t recognize the international court of law.”

Today Nicaragua, under President Daniel Ortega, has descended into violence, as people protest social security reforms, amid calls for him to step down.  Our US State Department spokesperson says, “Attacks on peaceful protesters is unacceptable.”

Someone should tell that to Donald Trump. In each of these instances, land rights and the rights of the poor, are the inciting themes for US involvement. We aren’t capitalist-imperialists for no reason.

So yeah. We do have a debt to these people who arrive here after we’ve assisted in leaving their countries in disarray. This has been the US approach to “democracy” all over the globe where Black, Brown, and Indigenous people live.

Shontina Vernon is a writer/filmmaker/musician currently based in Seattle, WA. She also serves as Creative Director of the Visionary Justice StoryLab ( www.visionaryjusticestorylab.org ), a collaboratory of interdisciplinary artists that work at the intersection of art, race, social, and healing justice. Read about them and donate, because in times like these, it will take everything we’ve got.

One thought on “U.S. Building Blocks of the Border Crisis”