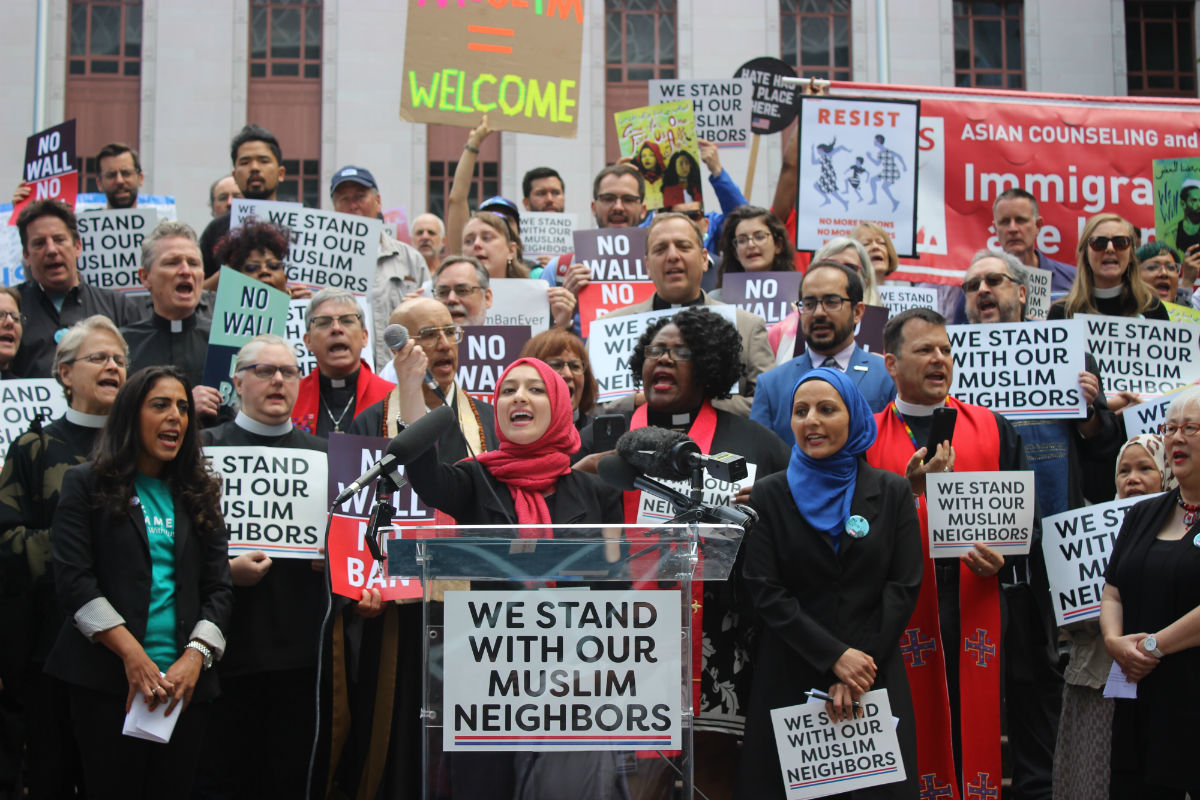 by Jessica Partnow and Cathy You

The Supreme Court upheld President Donald Trump’s travel ban on Tuesday in a 5-4 decision, barring “nearly all travelers from five mainly Muslim countries,” according to NPR.org.

The #NoMuslimBanEver campaign organized a protest and Day of Action on the steps of the US Courthouse in downtown Seattle, along with Muslim and immigrant rights organizations CAIR-Washington State, OneAmerica, MAPS AMEN (American Muslim Empowerment Network), ACLU of Washington, and the Truman Project – Pacific Northwest Chapter.

Varisha Khan, a local community activist and former Seattle Globalist reporter, called the ruling “yet another supreme court decision that adds to our shameful history of legalized hate,” likening the vote to the 1857 Dred Scott decision upholding slavery and to the 1944 Korematsu decision upholding Executive Order 9066, imprisoning Japanese Americans in internment camps during World War II.

“Trump set out to ban Muslims, and the highest level of our judiciary just allowed it to happen,” said Khan.

OneAmerica Executive Director Rich Stolz also likened today’s decision to the Korematsu ruling, “In time, this ruling will be viewed as an embarrassment,” he wrote in a statement. “This ruling underscores the importance of restoring a political and constitutional consensus at the ballot box that legalizing discrimination must never be acceptable in a Democracy founded on aspirational values of tolerance and equal justice.“

The travel ban prevents nearly all people from majority Muslim countries Iran, Libya, Syria, Somalia, and Yemen, as well as North Koreans and Venezuelans, from entering the United States. Today’s ruling gives extensive authority to the President, saying that he may lawfully exclude people from any country if he has found that their entry “would be detrimental to the interests of the United States.”

“We are deeply disappointed in today’s decision,” said CAIR-Washington Civil Rights Director Jasmin Samy in a statement. “Rather than reinforcing the notion that America welcomes people regardless of where they were born, what they look like or how they pray, the Supreme Court has upheld a ban driven by anti-Muslim sentiment.”

Featured image by Cathy You