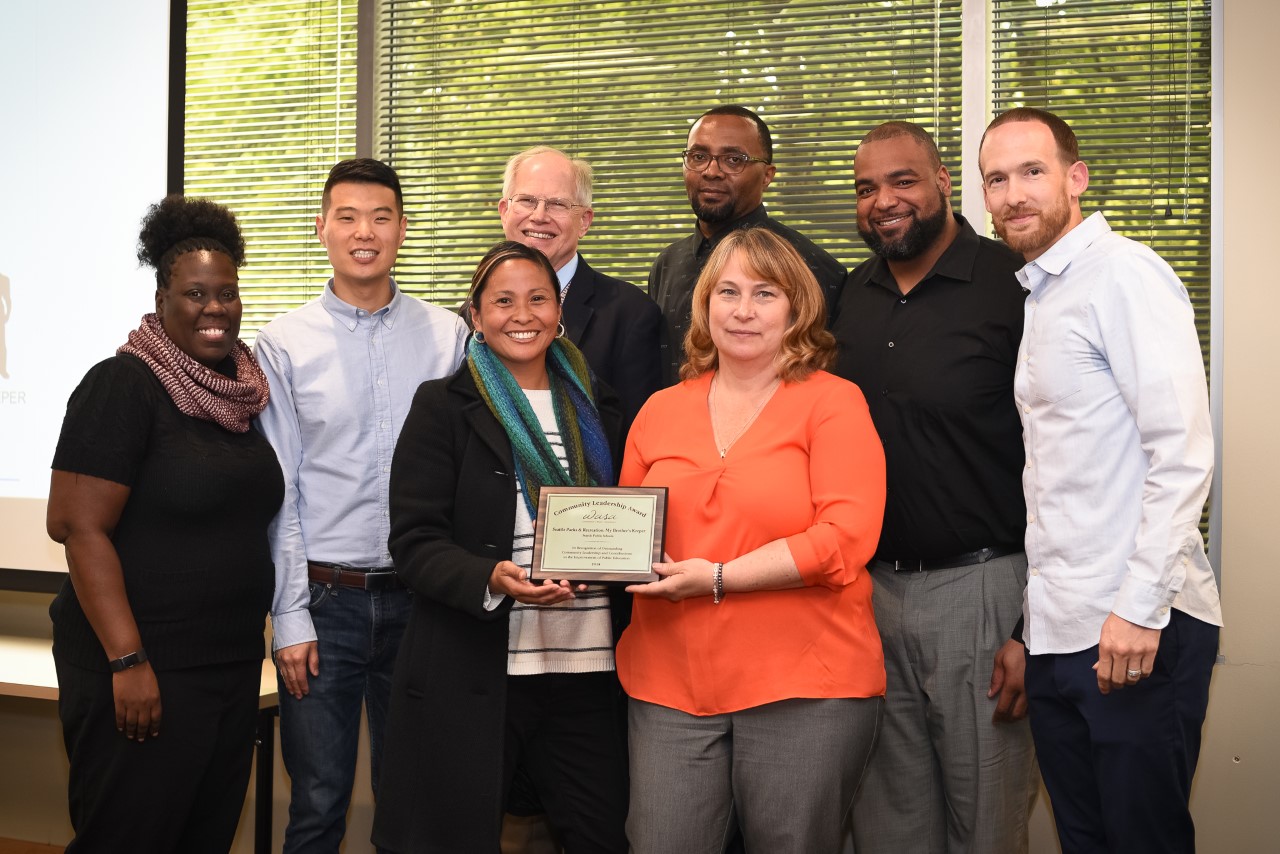 In 2014, President Obama gave the nation a gift. In response to the tragic murders of Trayvon Martin and countless other black boys across the country, Obama launched the My Brother’s Keeper (MBK) Initiative to provide black boys the resources, tools, and support they need to thrive in an education system not designed for them. Now that the initiative has taken root across the country, no greater example of the fruits of his vision can be found than here in Seattle.

Recently awarded the Washington Association School Administrators award for excellence by Superintendent Larry Nyland, Seattle’s MBK initiative—coordinated by the city’s Parks and Recreation Center’s Out of School Time Office—is providing black males the opportunity to flourish by providing access to the resources needed to help them be academically, emotionally, and socially successful.

“I see big change. Young black males are recognizing themselves as better versions,” said Daisy Catague, Manager at the Parks and Recreation Center’s Out of School Time Office.

Funded by the Families and Education Levy, this after school program is offered in five of the district’s middle schools in partnership with the City of Seattle’s Parks and Recreation Out of School Time Office. The middle schools include: Denny, Aki Kurose, Mercer, McClure, and Washington.

“People don’t understand that at your particular school, all of your afterschool activities are free. That’s what that investment is going towards with the higher sight to close the achievement gap,” Catague explained. “Every middle school has a coordinator. All coordinators are full-time Parks and Rec employees housed in the schools. They build relationships with students and administrators and align the school day with after-school programming.”

Though the program is tailored to meet the needs of the students at each school, the overall objectives and structure are the same. Students attend two sessions per week, for 1.5 hours per session, and meet with their mentors to receive academic support or attend workshops focused on a wide variety of topics, including bullying, decision-making, career exploration, communication, and social-emotional skill building.

“Students start the day with the “I Am a Black Male” pledge, which is a statement of pride and commitment about doing their best,” said Catague. “There is also a requirement of community service learning. It could be very simple like writing a letter to incoming sixth graders about what to expect or going to a local food bank and handing out food.”

MBK is an incentive-based initiative where students can earn stipends of $25 to $100 each semester. To receive the full amount, students must meet all four performance standards: accrue less than 5 school day absences per semester, attend 80% of the MBK sessions, acquire zero suspensions or expulsions, and pass their core classes with a grade of “C” or higher.

While the stipends create incentive, the real sparks that ignite student interest and involvement are the relationships with their mentors. Instructional Assistants (IA’s) and teachers from MBK schools receive a stipend to serve as mentors. Therefore, relationships established during the school day are carried into afterschool activities, and this continuity allows for deeper trust-building and connection. As a result, program coordinators have seen a decrease in student behavioral and truancy issues.

“If one of our MBK students has some challenges at school. They won’t talk to anyone but their mentor,” Catague shared. Mentors also provide academic support, engage in family outreach, and provide case management.

“I see kids taking themselves seriously. I see kids connecting in the hallways with their handshakes. They refer to themselves as Kings,” he said. Brown also recounted a story when a student had been involved in an altercation and shared that he refrained from hitting the student because he was wearing his MBK shirt and didn’t want to poorly represent the program.

This dramatic shift in behavior is a far cry from where they started. Brown remembers the day, five years ago when he and his principal reviewed the appalling data revealing that black boys were struggling with truancy issues, high suspension rates, and low academic performance. Determined to change outcomes, Brown requested a day to find a solution.

In response, he created an afterschool group of 15 black males to learn about their experiences in school.

“We wanted to know, what do you want? What’s missing? What changes can we make?” Brown explained. “Students don’t feel like they belong. We don’t meet kids where they are at.”

Soon these roundtable sessions were offered twice per week and Brown hired three mentors to support the students. As teachers began to see the benefits for young men, the women at Aki, Kurose requested their own program. The following fall, My Sister’s Keeper was born.

By the second year, the program began to gain more attention both from the city and district and, as a result, city resources were increased. Soon after, the program expanded to five sites, and now serves over 150 students across the district.

While students are thriving in the program, Brown notices the impact the program is also having on the mentors.

“The blossoming of the IA’s…” Brown explained. “I see my staff and how they are responded to by other staff. They are becoming assets in the [school] building in their own way. Some are inspired to become teachers. They want to contribute to education in a different fashion. They are starting to see pathways.”

As the program continues to bring positive change, Brown envisions building pathways for additional students of color and extending the program into high school. Under his leadership, Aki Kurose created Hermano Unidos for young Latino males and Hermana Unidos for Latino girls. These programs are structured similarly to MBK. He hopes to begin a program for Asian Pacific Islander students in the future.

If one thing is certain, it’s that the passion, commitment and love that inspired President Obama to create MBK is reflected by the Seattle staff and felt by their students.

“I wholeheartedly believe in this work,” Brown said. “I enjoy the hell out of it.”

Melia LaCour is an education columnist for the Emerald and the Executive Director of Equity in Education at Puget Sound Educational Service District (PSESD). She is a native Seattleite with a passion for writing and social justice. The opinions expressed in this article do not reflect the opinions of the PSESD. PSESD is not responsible for the accuracy of any of the information supplied in this article.