A day after giving birth to her fourth child, Catrice Dennis felt a strike of inspiration. Sitting on her bed at home with her newborn daughter, looking out the window to the world outside, Dennis whispered the words, “I love you just because.” Suddenly, the material for a new children’s book, I Love You Just Because, flooded her mind.

Dennis took out her bedside journal and began writing. “I love you just because the sky is blue,” and “The sun shines just as bright as you,” and few dozen more phrases found their way onto the paper. She began to cry as she wrote; it felt like she was channeling some divine inspiration.

“Over the course of the following week, I just kept getting more” says Dennis, a mother of four and a resident of Federal Way. “I call them ‘downloads.’ I kept hearing more reasons why I loved my children.” 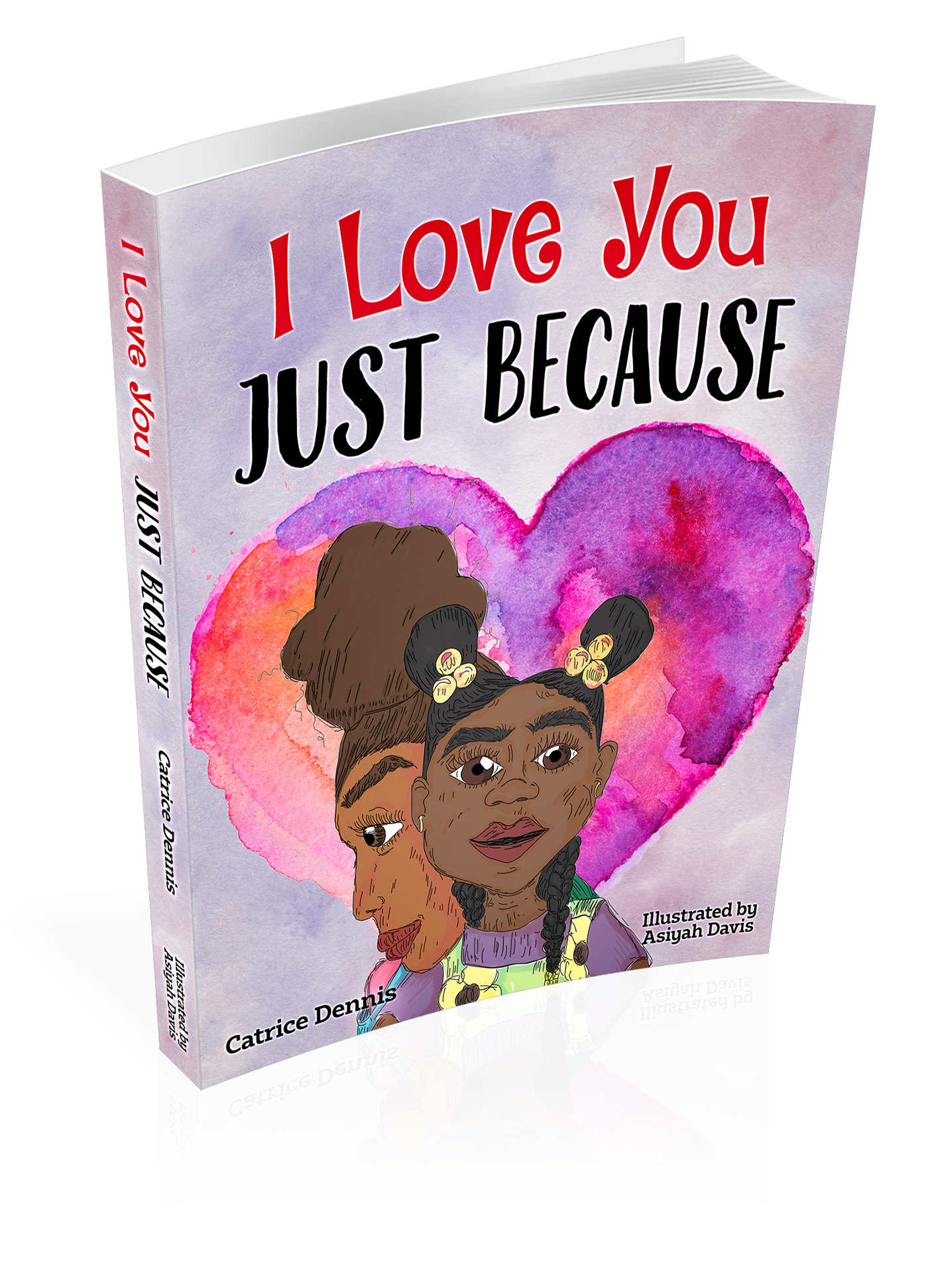 Things didn’t stop there. A few days later, she noticed an ad listing upcoming vendors at an alternative healing fair. One of those vendors was an independent publishing company. She attended the fair, met the woman in charge of Life Chronicles Publishing and the two struck up a deal.

In the year-and-a-half since, Dennis placed her book in stores from Tacoma to Seattle, including the Columbia City Art Gallery and Federal Way’s Marlene’s Market. She has sold about 300 copies, all independently. Dennis will sell next in-person at the Skyway Library Indie Author Event on Oct. 13.

But before she could have physical copies for sale, Dennis needed to employ someone to illustrate the book. That person turned out to be her 21-year-old daughter, Asiyah Davis, a lifelong artist and student at Olympia’s Evergreen State University. Over the years, Dennis had seen her daughter’s passion for drawing blossom. She had always drawn as a kid, Dennis says, even coming up with her own company name that she signed to every picture she drew: the Pencil Point Company.

“I just felt like this was something we were supposed to embark on together,” Dennis remembers. “When I explained to her what I wanted, she came back with an illustration and it was just perfect.”

Over the course of the next few months, the two worked together to complete the book, sometimes struggling to stay on schedule while Dennis worked and Asiyah attended school. But juggling the multiple tasks paid off over time for the duo. The result? Intricate, beautiful images with fine detail and big, bright eyes to go along with the heartfelt writing.

“I had to kick her into gear,” Dennis laughs. “In the end, though, it was like a birthing process for her. I had just given birth to Meccah-Rose and to this book and now my daughter was birthing her art. It was a real time of new beginnings for us.”

As a young girl, Dennis wrote poetry and even fleetingly considered writing a book one day (she’d taken a memoir writing class in college, she says), but that dream was put on the back burner when she had children and began her career in education. Dennis, who is concentrating on opening her own learning center now, called Teaching with Love and Care, has worked with children from kindergarten age all the way through high school. And now, she says, the work is as important as it ever was.

“I like to think of myself as an academic coach,” she says. “I work with a lot of children who have experienced trauma. I see a lot of young people who are hurting. One of my priorities when I work with them is to use affirming sentences, like, ‘I am special. I am wonderful.’ I want them to know they have control of their lives. It can be very sad when you see a child who can’t think of something nice to say about themselves. Kids cry because they can’t do it sometimes. This is necessary work. How else is the world going to get better? Our children need to be healthy.”

In it’s own way, Dennis’s book is helping that necessary healing process. While the book depicts the love between a Black mother and her daughter, it does not take place during traumatic times such as the Jim Crow era, Civil Rights or slavery. Instead, it showcases a more everyday relationship, rich with love and mutual appreciation. In a world where many children’s books like this are geared to people who don’t look like Dennis and her children, I Love You Just Because does the opposite.

“I think today it’s easy to get caught up in what’s going wrong and what’s going badly,” says Dennis, who remembers reading Sweet Valley High and The Bluest Eye as a young person and Langston Hughes poetry to her children as a parent. “We fall into that energy, that hole, and we forget the simple things that we can get inspiration from. I wanted to remind people of that. A lot of time when you see African-American books, there’s a lot of trauma. A lot of times they’re about events in history, which is good for us to know about but they’re these very serious types of issues. It isn’t often you get to read something that has to do with black people and it’s a normal life topic. It doesn’t always have to be so serious.”

And the response Dennis has received, especially from mothers and women of color, has been affirming and uplifting.

“It’s amazing to see mothers and daughters enjoy the book,” Dennis says. “To see a mom look at it and say to her child, ‘Oh my gosh, she looks like you!’ is so great. Across the board, from mothers, regardless of race, they’ve been able to relate to this book. They share stories about how they cried while reading it and I tell them that I cried while writing it, too.”