For his new show, “Contour,” Seattle artist Jake Millett has made complete works of fractures. His are visions of expansive landscapes broken down into specific, often minuscule sections, split line-by-line and shade-by-shade. Sometimes bursting with bright colors, sometimes cold and chilling like an angular iceberg, Millett’s work, which will show this month at the Capitol Hill gallery, The Factory, through Halloween on specific dates, bends the eye to consider new ways of interpreting vision.

Split like a spider-webbed windshield after a rock strikes, the work can be dizzying and thought provoking. Millett, who grew up in Columbia City, is poised to display these pieces for audiences interested in investigating his bisected, creative intuitions.

Jacob Uitti: Your new show is called, “Contour.” The word implies ideas of edges but also of boundaries. So, let me ask you, what does the word “boundaries” mean to you, artistically?

Jake Millett: For me, “contour” refers to the line, specifically. The use of heavy line and repetitive line work is very prominent in my artwork. But a big thing that I think about with boundaries, which I’m very interested in, is the shape of land and the shape of water and the way landscapes have been shaped and contoured by water over time. The way that looks aerially and from certain distances. Really, the boundaries for me, they create my pieces.

JU: Your work takes great inspiration from nature. But do you remember a particular scene in nature that opened your eyes?

JM: There are many. But I love a sunset. How it can be different every single night. The striations of color and layers of color embedded in a sunset really take my breath away and provides a lot of inspiration. In terms of a specific sunset, the one that comes to mind is during a trip I was on in Australia with a friend of mine. We were on this trip and one night we slept on the beach on this one island. We were laying there in our sleeping bags, ready to go to bed and the sky just exploded with reds and oranges. It was one of the most immersive sunsets I’ve ever seen. There was 360-degrees of color everywhere.

JU: Your art is very geometric. Do you remember particularly loving shapes as a kid?

JM: I’ve always loved stencils and overlapping shapes and fooling around with chalk. My earliest memory as a kid is sitting on the driveway and drawing shapes in chalk. It’s a funny memory: I remember being frustrated because I wanted them to be perfect. And I couldn’t draw them perfect as a 3- or 4-year-old. I always wanted to draw the perfect shape. 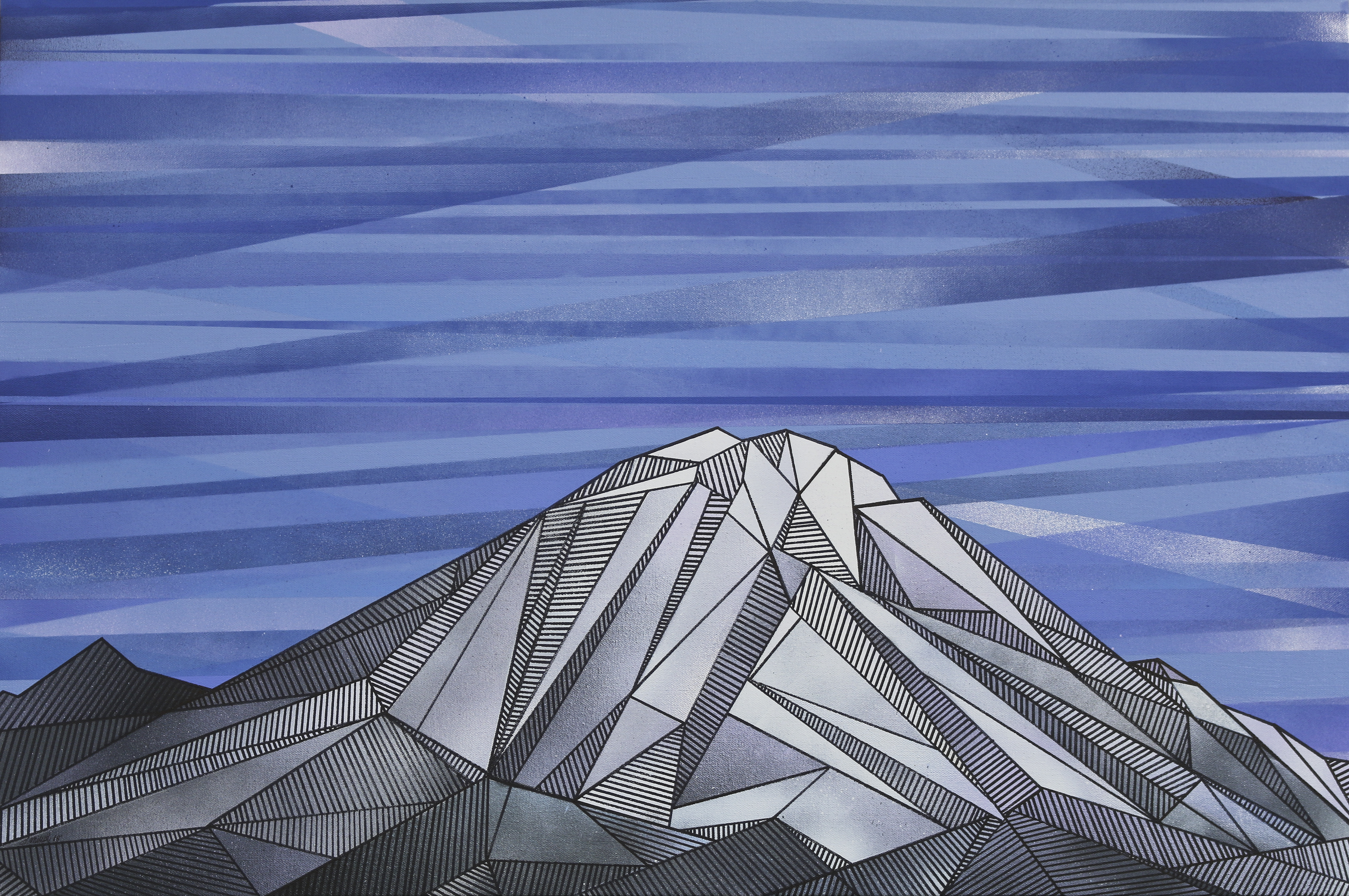 JU: You grew up in Columbia City. What has the neighborhood taught you about your own art?

JM: Columbia City, to me, is so incredibly beautiful. It’s played a big inspirational role just graphically, the way it looks. Driving on Lake Washington Boulevard — I’ve driven on that road so many times in my life — staring out at the lake. That’s been imprinted on my mind. And Seward Park, the view of Mt. Rainier. These epic, gorgeous views that are really just part of the neighborhood and part of growing up here. I didn’t realize how special and lucky I was until later in my life.

JU: You work regularly with your father, who is also an artist working as a steel fabricator. What has this familial, collaborative relationship been like for you?

JM: It’s fantastic. I’ve learned a ton from him. It’s almost been like an apprenticeship. He’s a sculptor, and I’m his right-hand man, his studio assistant.  I’ve spent the past 3-4 years making most of his sculptures for him and it’s been great. He respects my input and is always asking my opinion on projects. We have to troubleshoot a lot together and figure out how to make 12-foot steel structures stand up safely and look right. One thing in particular he’s taught me is all the ways you can manipulate steel, all of its possibilities. Being able to weld has been a cool skill to learn, too. I’m starting to build a lot of my own objects.

JU: Some of your paintings have utilized mirrors as a medium. What made you jump into this idea?

JM: That was a particular period for me, during which I was experimenting a lot with acrylic and mirrors, spray painting, and layering. And I was really interested in involving the subject into the piece into the composition. Whenever the viewer is looking at a piece they can see themselves in it and they then become part of it. I wanted to capture the playfulness of the piece. It was meant to be interactive. And I had a lot of fun working with mirror but I haven’t worked with it in a little while. I’ve gone back to canvas, my original medium.

JU: You work in several mediums and on several pieces at a time. What about this diversity interests you as an artist?

JM: I think it’s important not to pigeonhole yourself. Sometimes I find myself starting to make the same painting over and over, so I think it’s good to mix it up and try out a lot of things to see what you like and see what you don’t. For example, I’ve always loved taking photographs, and I don’t think I’ll ever stop. It’s pretty crucial and inspires a lot of the paintings that I do. I end up using a lot of photographs as references. I just have fun in different mediums. They may not end up being my bread and butter, so to speak, but they’re fun.

JU: Okay, rapid fire time! How big are most of the paintings you’ll be showing?

JM: There’s a wide variety, but I love to work big. There is one that’s 6-feet by 3-feet and another that’s 6-feet by 4-feet. Those are almost muralesque — big and immersive. But there are smaller ones, too, that are less than a square foot.

JU: How long have you been making art like this?

JM: I started in college but at the time those weren’t entirely geometric. So, it’s probably been about eight years.

JU: How long does one of those muralesque paintings take?

JM: That’s always the hardest question! My mom likes to say, “If I counted the hours, then I wouldn’t be an artist.” I work simultaneously on a lot of work at once, so it’s really hard to say. I do everything in multiple layers and work on four, five, six pieces at once. So, if I had to put a number on it, the best I can say is a matter of months.

JU: How many pieces will you be showing?

JU: How long will they hang?

They’ll be up until Halloween with a couple of scheduled viewing opportunities.