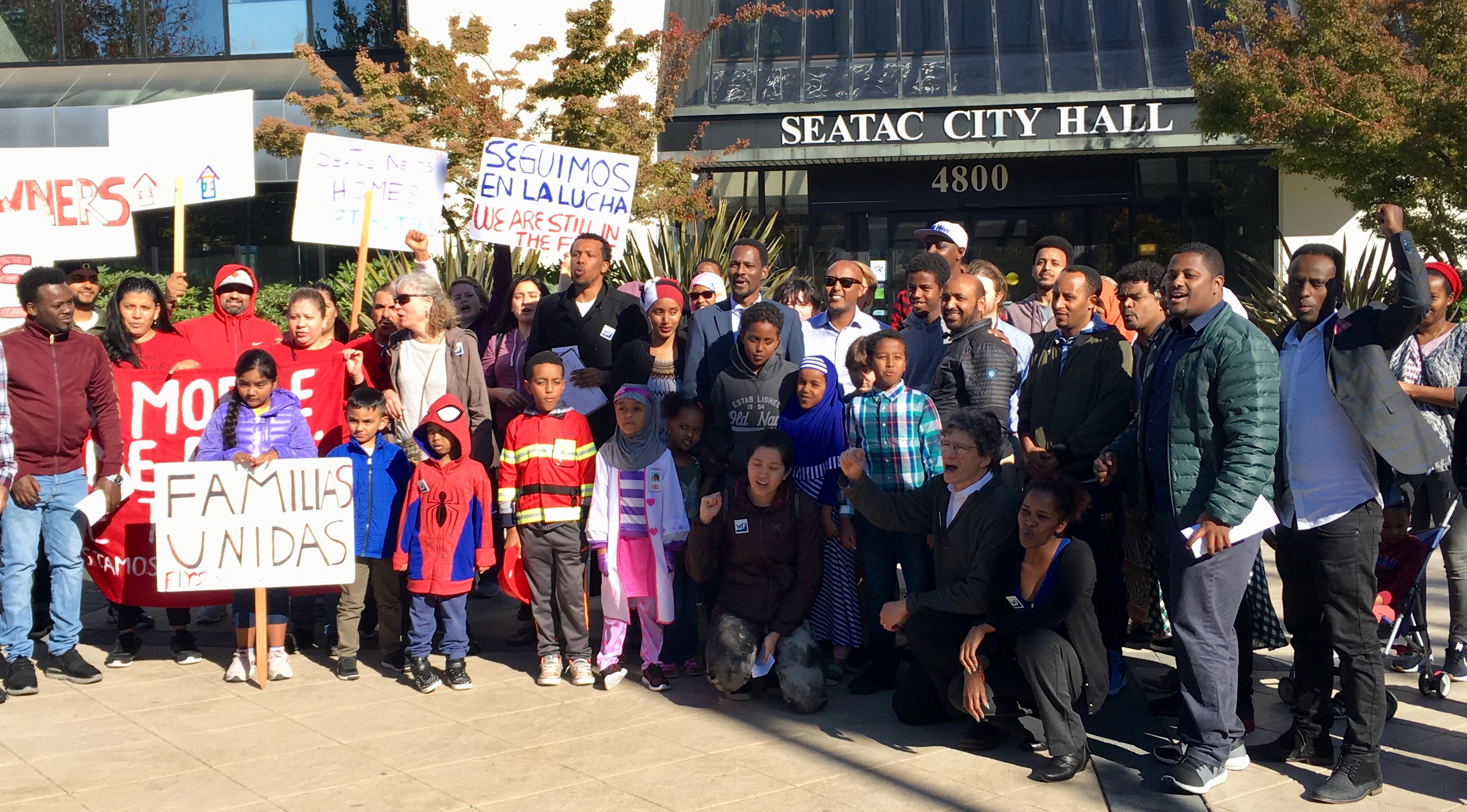 Under a clear blue afternoon sky on October 13, a crowd of about 40 people — including representatives from the Seattle City Council, the King County Working Families Party, and the Firs Mobile Home Community — gathered outside SeaTac City Hall to show support for the appointment of Takele Gobena to the Council’s vacant fifth seat.

Gobena, a soft-spoken Union Representative for Teamsters 117 and father of three, was ostensibly at the center of yesterday’s action, but the gathering was not really about him. It was about the community of East African businesses protesting the SeaTac City Council’s September 25 decision to sell the building that houses their stores, restaurants, services, and other businesses.

The complex sits at the corner of Tukwila International Boulevard and South 154th Street, across diagonally from a light rail station and just north of Sea-Tac International Airport. The SeaTac City Council previously owned the building and is selling it to private developer Inland Group, displacing over 50 businesses, many that serve the local immigrant community.

Gobena’s nomination would allow the SeaTac Center community to play an active role in discussions about the complex’s future.

The Council privately discussed 13 candidates for appointment the same day at a special meeting to interview candidates and nominate a candidate. It ultimately nominated Amina Ahmed, an East African immigrant activist and business owner, to sit on the seven-member City Council that serves the city of nearly 30,000 people. Although the Council passed over his bid for the seat, Gobena still counted Ahmed’s appointment as a positive step toward the SeaTac Center community having a voice in the decisions that would affect their businesses and livelihoods.

“This is absolutely the result of our fight to have a representation and voice,” he said. “We are aiming higher for the next step.”

Gobena and SeaTac Center business owners have a lot to say about the need for SeaTac City Council to hear the voices of its residents, 62 percent of whom are non-white, and many of whom rely on SeaTac City Center for the shops, restaurants and gathering places that keep them tied to their East African cultures.

Prior to the Oct. 13 rally, Gobena acknowledged that his bid for appointment is more about the community than about his own goals.

“It’s all about this community that has, for so many years, been disenfranchised and hasn’t been heard,” he said.

Gobena pointed to the city’s pending sale of SeaTac Center as an example. The city posted an RFP on its website detailing what the city wanted in a buyer. Many business owners in the complex felt blindsided by the news.

“They didn’t talk to any one of the people who would be affected,” Gobena said. “For me, that was a final disrespect and a sign of a lack of local government having relationships with community.”

Gobena added that SeaTac Center tried its best to advocate for itself: Business owners submitted an RFP alongside Inland Group, but the City did not accept the proposal.

Asha (whose given name is Adar and did not disclose her last name) and Nadia Yusuf, just two of many business owners at SeaTac Center, could lose their livelihoods if forced to vacate the space. Nadia operates a small clothing stall in Bakaro Mall, a retail section of SeaTac Center, and sat among a floor-to-ceiling inventory of colorful abayas, hijabs and accessories.

When asked what would happen if Inland Group takes over the building, she said, “Two things: I lose my property — all my stuff. Second — I can’t support my family financially.”

Yusuf worked multiple jobs to save enough to establish her business 10 years ago, and her work supports five children and her husband, who is unable to work because he suffers from heart disease.

Asha subleases a number of stalls to other small shop owners, including Yusuf. Asha came to the states in 1992 from Somalia, where she was born into a family of entrepreneurs.

“We are in desperate need to save our businesses,” she said.

Business owner Abshir Mohamed, who assisted with translating some of these conversations, revealed that his sister pays $18,883 in rent each month in order to occupy a 24,000 square foot space in SeaTac Center, where her restaurant and shops are located alongside a banquet hall, a mobile phone shop, and tax return preparation services.

Abshir also mentioned that the SeaTac Center building was constructed in the 1950s and that renovations were discussed at the last Council meeting. But, even if the building undergoes renovation, the businesses will have to relocate during that renovation period. The Council did not clarify where the businesses would go or how they could recuperate lost income due to the relocation.

SeaTac Center succeeds as a business hub because of its close proximity to SeaTac Airport, where many of its customers and clients work, and its relatively affordable rents. If the businesses must move into another neighborhood or town, they will likely lose their customer base and face higher rents.

During Gobena’s appointment interview on Saturday, he emphasized that many of these business owners would have to start from scratch

“I can’t imagine being a business owner, a woman, a mother, forced to give up her livelihood and move,” he said.

In addition to speaking out against the displacement of the SeaTac Center community, Gobena also explained to the Council his plan for creating a public safety committee, ensuring SeaTac’s long-term fiscal sustainability, and making SeaTac more livable and walkable with more sidewalks and parks. He also said that given the city’s demographics — with about 70 different languages spoken by its residents — the city’s website should be translated into multiple languages to help facilitate more citizen engagement.

Although Gobena offered an engaging address to the Council, the Council’s decision to nominated Ahmed was based on Ahmed’s prior experiences with the Council and its high opinion of her work.

“We [the Council] are lacking some skills that Amina would complement us very well,” said Councilmember Rick Forschler. We’ve relied on her advice in the past on things in the community and I know she’ll bring something to the council that we haven’t had.”

Councilmember Kwon acknowledged Ahmed’s track record of experience working on various community issues, and Hill said that, “Amina is an intelligent individual, with a well-connected network in the human services area, and is a successful business owner.”

Featured Image: Business owners from SeaTac Center and community members rally outside of SeaTac City Hall Oct. 13 to support a new candidate to the City Council that will better represent the area’s diverse community.