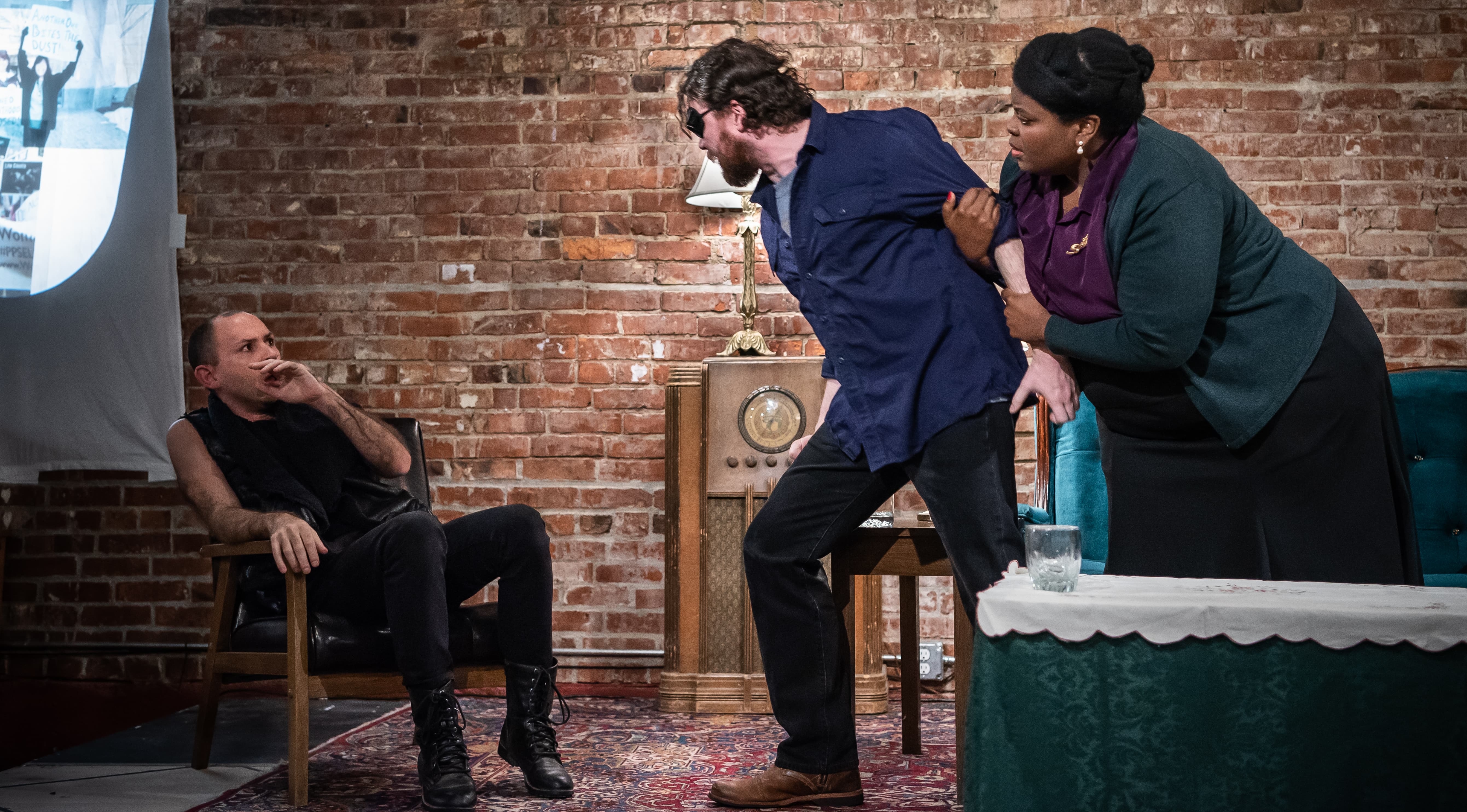 Should I stay or should I go? Be there or not to be there? Speak up or be silent? The characters in Tony Kushner’s drama A Bright Room Called Day  ask themselves these questions and many others, but not at the beginning of the play. The audience, by extension, may ask themselves the same questions.

The Williams Project brings Kushner’s play to the Hillman City Collaboratory. The show opened Oct. 26 and runs through Nov. 18.

What comes to mind is that story about the frog placed in a pot of cold water on the stove. The frog could easily have jumped out as soon as it is placed on the stove. But it just sits. In the meantime, the water is getting warmer and warmer. By the time the frog “decides” and attempts to escape, the water is too hot, so it dies.

Kushner’s 1985 play begins New Year’s Eve in 1931 with a group of artist friends celebrating. All is well with life in Germany, and life will get better. Ignored is this man named Adolf Hitler and his Nazi Party. Who is he? What can he do? As we learn more about Germany, we come to see that the artists — and millions more persons and countries — were wrong about Hitler.

The characters do not always agree about surviving or escaping. Life worsens terribly for millions. Persons who can choose what they will do. Those who have the means and determination can go, migrate; those who are convinced what’s happening in the country is just a phase, that they will survive, ride it out stay. The latter group can be divided into two groups: those who indeed adapt and those who die, sometimes because of paralysis on their part and other times because of their inability to escape.

All of the above describes the forefront of the play. Unfolding simultaneously on a lower level, in the corner of the stage, is commentary on the government, sometimes with words and other times with slides projected on the wall. Parallels are drawn between Hitler’s rise in Germany and Ronald Reagan’s rise in the United States of America. In an attempt to make the play more contemporary, President Donald Trump is on a slide too.

For some viewers what is most fascinating about the play is how prophetic Kushner was. Many present-day problems in America originated or grew via the Reagan Administration. Though Reagan was president from 1981 to 1989 and died in 2004, many believe some of his policies are detrimental to the American people, especially those persons not wealthy.

Presidential candidates in 2016 often aligned themselves with Reagan. Similarly, many Americans are convinced Trump is changing America for the worse. The vitriol against so many steadily narrows who makes up America when one considers the Americans attacked by him and the ban against Muslims, persons coming from “—-hole countries,” and the caravan en route here from some Latin American countries.

Remember how few people thought Trump would win? The electoral college notwithstanding, who would have predicted that only about 3 million votes would separate those who voted for Hillary Clinton and those who voted for Donald Trump? The stepsister of Anne Frank is not the only person who compares Trump to Hitler and not simply because white nationalists often greet him with “heil.” Trump nor anyone else can change America alone.

The Williams Project has another success on its hands as it works to fulfill its mission of making “theatrical excellence accessible to diverse and engaged audiences, while paying actors a living wage.” Partners include Plymouth Housing, 21 Progress, and Northwest Immigrant Rights Project. The play runs through November 18 at the Hillman City Collaboratory, 5623 Rainier Avenue South at the corner of Orcas and Rainier Avenue. Reserve tickets online or at the box office, always pay what you can. Phone 206.494.5364.