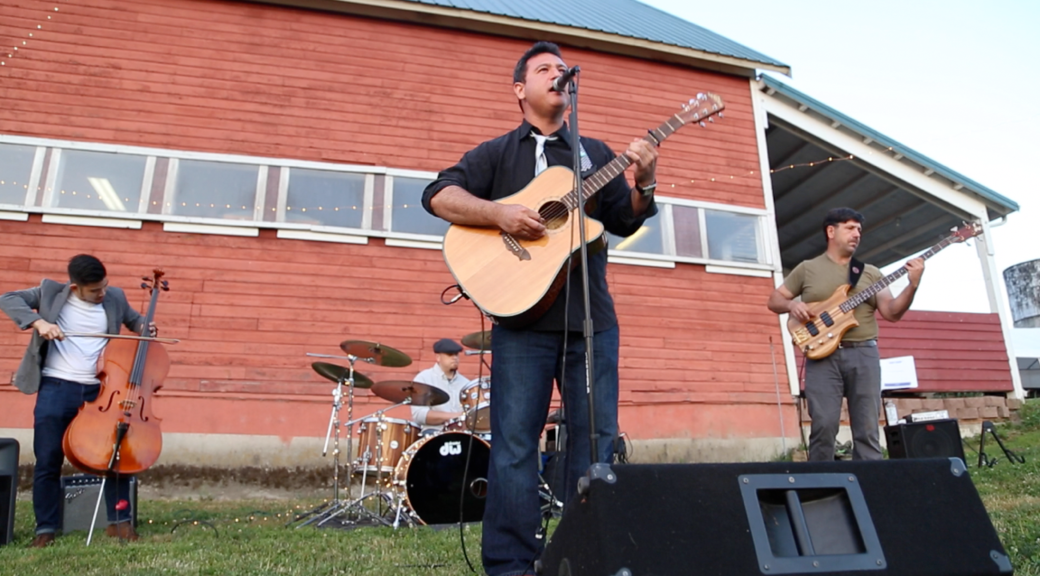 Theory of Change is a politically charged indie rock quintet on a quest for a fairer and more just world. Their mission is to find a greater truth through their music, addressing life’s more complex challenges and every day struggles through the lens of society’s structural inequities.

On the heels of their debut single “Banyan Tree”  — a catchy relaxed tune with a subtle blend of folk, pop, and ska — this progressive rock band will release their second single “Lost & Found” and a coinciding music video Thursday night at The Columbia City Theater.

I spoke with frontman and guitarist Ben Henry about their upcoming performance and his personal perspective on change.

Gus Marshall: Can you tell me about what this video is about?

Ben Henry: The video for “Lost & Found” is about a friendship that has lost its way. It’s a metaphor for when a friend gets lost in societal expectations — that to be successful we must join institutions that oppress people — and eventually finds her way again — that, in the end, she is there for her childhood friend, the farmer, whom she was sent to foreclose upon.

This video is also exciting because it pushes people’s typecast expectations. Casting two women of color — the wonderful actresses Ximena Va and Eboni Arevalo — in roles typically reserved for white actors pushes the envelope. Even seeing people of color on a farm as extras is progressive.

And the story and photography are just gorgeous. This is a story we’ve so badly wanted to get out for so long, and it’s finally happening.

GM: Where are you from? Where do you currently reside?

BH: I’m originally from Honolulu, and have been in Seattle for 10 years. The band is based on Beacon Hill.

GM: How did you learn to play music?

BH: Well each of my bandmates have different stories on this. For me, I grew up in Honolulu with a passion for Seattle grunge. Finding the music of Nirvana was nothing short of a life awakening. I had a rough upbringing, and the hour with my Walkman on the bus from school was my escape. I could think of no greater good to bring to the world than what music brought to me. So I learned guitar chords and how to sing and play at the same time and started my first band. It was pretty bad at first but over the years have honed my songwriting craft.

GM: How did Theory of Change come together?

BH: In Hawaii I eventually started a grunge-pop band called The Crud in the 2000s that had a music video playing on cable TV and everything. We moved to Seattle and changed the band name to Grim Smiley. But, after I started grad school and a whole bunch of life happened, the band drifted apart. I was focused on other things but was still writing and playing open mics. About 5 years ago some promoter found the old Grim Smiley website and emailed us out of the blue asking if we wanted to open for the Orwells at the Croc that Saturday. I sent him a YouTube clip of me playing with a friend at an open mic at Columbia City Theater, explaining that our vibe is much more mellow now and hoping not to hear back. But a day later he replied and said, “sounds good.” Then I had to pull a band together in less than a week — you can’t say no to the chance to play a Saturday night at the Croc! We rehearsed for the first time as a band the night before the show. We ended up pulling it off and there was a bunch of people there. It was a thrill. That was the catalyst for the project that would go on to become Theory of Change.

GM: What message does your music convey?

BH: We still believe strongly that music can save the world. A lot of us come from social activist backgrounds and there is a lot of power in music. You can relate to people in ways you can’t with a Powerpoint presentation or policy paper. You can’t just engage the brain; you have to speak to people’s hearts and souls, which music does.

We see all the inequities around us. We see how our societal systems set up regular people to fail. We see how money buys power and subverts democracy. We see our forests burning, our ice caps melting, our sea levels rising, and our disasters more severe and routine. We want to cast a light on just how much greed is killing our planet and creating massive inequities, and present an alternative on how things could be.

But, we also make music about life’s challenges — from surviving tragedies and obstacles to finding your place in the Universe to even love and relationships. I wrote a song while I was in chemo fighting off Hodgkin’s Lymphoma in 2014 called “Society.” The lyrics literally described what I was feeling during my first treatment of chemo:

“Lost & Found,” meanwhile, is about losing and finding a relationship that has lost its way. We talk about life and extrapolate it to broader structures.

GM: How do you write your material?

BH: Songwriting is my therapy. It’s this awesome way to take feelings of angst, sadness, excitement and joy and translate them into something constructive and tangible — a song. They just come out of me. I almost think of songwriting as more about listening than saying something. The chord progressions, the melodies, the song structures, the words are all there, you just have to pay attention. I try to harness these bits and pieces and arrange it into a compelling narrative that just sounds good.

Once I have the basics of a song ready to go, I take it to my bandmates. It is surreal to hear a full band play a song you just dreamt up sitting on your couch — one of my life’s greatest thrills.

This is the first time I played in a band that wasn’t your conventional rock lineup — drums, bass, rhythm and lead guitars, vocals. Playing with a sax and cello presented a new challenge for me — how do I make these instruments that I don’t know how to play myself fit the arrangements? What parts will they be playing for each part of each song? I work very closely with saxophonist Bill Monteleone, who has a jazz background and an excellent grasp on music theory, to flesh that out. Then cellist Justin Chan brings in his classical flavor. I also work with our rhythm section, bassist David Hiller, who brings these melodic bass lines, and Lui Williams, a beast of a rock drummer and a filmmaker in his own right who is sitting in for us.

GM: What inspires you as musician?

BH: Just simply living life. Our song “Supersonic” touches on this — we are just specks of dust in an enormous Universe. It is so grand and majestic and beyond our comprehension. How lucky we are to be here! How many things had to happen exactly the way they did in the 13.8 billion years of the known existence of the Universe for us to be here where we are at right now? And so, it’s on us to make the most of this incredible opportunity. People talk about wanting to win the lottery — we’ve already won by just being alive. Also, it’s just getting through this crazy thing called life. I’ve survived cancer and losing my apartment to a fire. For me this music is also me telling my own story of resiliency.

GM: What do you feel is most important to you about your music?

BH: The opportunity to tell a story.

GM: Can you tell me about how your video was conceived and how it was brought to fruition?

BH: I was actually brainstorming with some family about this concept of being on a farm — which represents wholesome values and sustenance — and the idea that a banker would threaten that with a foreclosure — something that is happening all across the country. And that the banker and farmer once had a relationship. At that time we envisioned a man and a woman and that there would be romantic tension. When I brought this idea to some collaborators and the band, the idea morphed into having two women as leads, and that this is more about a deep relationship between two friends who grew up together. And that is really central to this story — the video never resolves what happens to the farm or becomes of the farmer. The resolution is about how the banker decides to handle this tough situation that basically calls upon the banker to choose a side.

We shot all the farm scenes at Bob’s Corn Maze in Snohomish County. It’s a gorgeous property as you can see in the photography.

The actors did an amazing job. The ad-libbed outtakes, which we’ll be sharing at the show, are gut-busting hilarious. And the extras for the fundraiser scene are just our homies who showed up for a BBQ and concert at a farm.

GM: What’s next for Theory of Change?

BH: We’ve been pretty focused on finishing the video, releasing our second single and prepping for this big show, our first full-band performance in two years. After the show I’m gonna take a big breath and get back to work on finishing the album, and then releasing it next year. We’ll want to start playing live more often and releasing more videos and music. This album will be our first so it will be nice to have started a catalogue for people to start to listen to. But we have so many songs that we want to get out there, we’re just getting started. Also, we see videos as a vital piece of our storytelling, and not just some promotional obligation. We are excited to find new ways to innovate the storytelling we do with the music video medium.