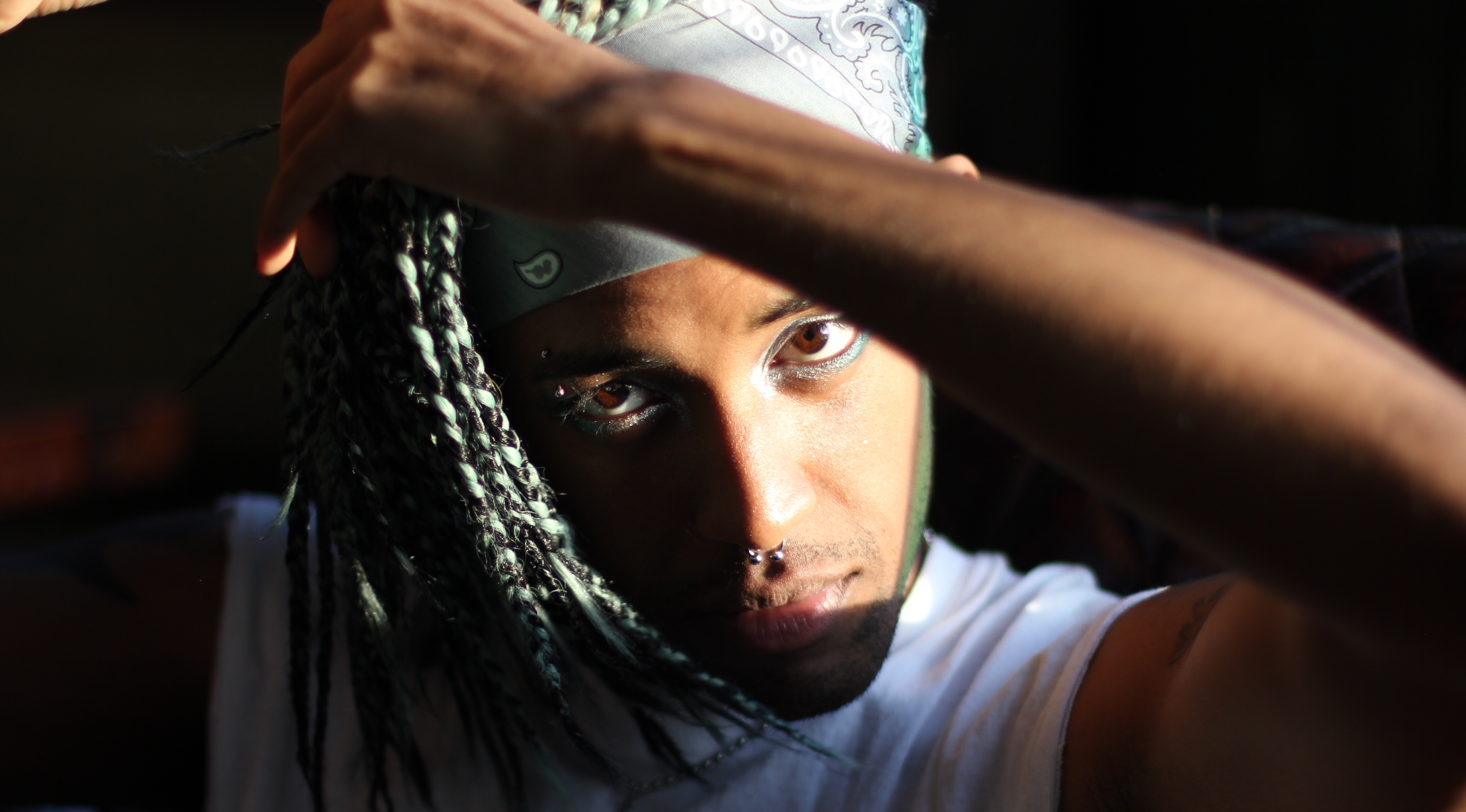 Seattle-based artist and musician Danny Denial recorded his 2018 album, Dead Like Me, in Enterprise, Alabama, at the end of 2017. Denial, who identifies as a person of color and queer, remembers taking a break from the rigors of making music, stepping outside the studio and seeing a man hanging a confederate flag directly across the street.

“The fight-or-flight instinct in me said, ‘Oh, get away, protect yourself!’ but the cerebral, storyteller in me said, ‘Hmm, what’s your story?’” says Denial, 27, who moved to Seattle from Los Angeles three years ago and now lives in the Central District. “I’m interested in what makes people tick in the time we’re living in.”

Despite the encounter, Denial and company finished the record, a jagged, loud, raging album that spews saliva as erupts with frustration. To accompany Dead Like Me, Denial also produced a “visual album,” which he calls DETHHEADS U.S.A., that stars Seattle musicians Eva Walker of The Black Tones and Nozomi Mumsie Momo, who plays in Denial’s other musical project, Dark Smith.

DETHHEADS U.S.A., which was shot in a day in Seattle, was born out of the same angsty emotions heard on Dead Like Me. But while overt racism and the potential of violence aren’t explicit topics on Dead Like Me, they are prominent themes in DETHHEADS U.S.A., a tense, thick 15-minute film that drips with paranoia and the real fear of direct, random violence.

After releasing both works this year on Friday the 13th in July with no prior media or advertising, they took off. AFROPUNK, to name one glowing review, called Denial one of the world’s eight most punk musicians. But the release also left the artist with questions. What was next for him?

In Alabama, Denial had recorded with a producer and drummer, Tyler Kennedy, who, today, lives in the U.K. So, Denial thought, after the success of the record and visual album, why not a tour in the U.K. with Kennedy on percussion. Denial left for the U.K. October and returned to Seattle mid-November.

While the tour was successful and fun in many respects, Denial continued to feel the same general paranoia and fear that he expressed so eloquently in DETHHEADS U.S.A., the same feeling that that many queer, POC-identifying people feel in their day-to-day, he says. As a result, Denial and the crew  decided while he was touring to make another visual piece mid-stream, filming in the loud, dark clubs they performed in.

Their work resulted in the song “Crises” and accompanying video. While not an official sequel to DETHHEADS U.S.A., “Crises” does share in the same emotional palate. U.K. artist Camille Alexander (of the band A Void) shot the film which premiers here the work here today.

The Emerald asked Denial a few questions about his songwriting origins, how his life has changed in the last year and what his goals are for the next.

This interview has been edited for length and clarity.

You’re such a great, economical songwriter. When did you begin crafting songs?

I always felt like a songwriter before I ever felt like a musician of any kind. I remember I’d be writing lyrics when I had no means or ability or skill set to write music. I’d have pages and pages of lyrics that had no music to them. Eventually at some point I started to teach myself guitar so I could write. But lyrics always came first and they were always a bit like a diary. I’d often write in first-person. Though in recent years I’ve challenged myself to break out of that, like for some of the songs in Dark Smith.

There’s such palpable drama in your audio and visual work. What’s pushed you to produce such tense pieces?

To be honest, I just feel like a tense and dramatic person. I think a lot of times I don’t really know how to be chill. The space that I create and conceive ideas in is often a space of anger, frustration, sometimes disillusionment, sometimes depression. It’s always coming from an extreme places and often times I think I’m trying to exorcise, trying to expel certain feelings out of myself in my writing. The end product ends up being so raw and sometimes ugly. I was self-conscious about it for a while but in the end this is who I am and people who like what I do like me for that reason. I never really write to make statements, though, like about alienation or white supremacy. But they become elements of the music.

What was your mind-state as you created Dead Like Me and DETHHEADS U.S.A.?

In the beginning of this year I was just becoming increasingly frustrated with the music scene — not just here in Seattle. But feeling frustrated to be an artist on the fringes, because of my background or being POC or queer. There was all this conversation about artists like me but there was still nothing being done about representation besides a lot of lip service. It’s more aggravating than being ignored.

There was also a situation recently where Dark Smith was going down to Portland to record, and we were in this small Oregon town getting gas. We got heckled at this gas station, we were called the N-word. It was scary. It was just the three of us and we looked at each other, like, are we safe? I think that’s where the idea to tackle the visual album with the tone and language and ferocity of the music came from. It just made sense to me.

Your film work is so impressive. How do you produce these elaborate works?

It’s always super DIY for me. And as a writer, I’m always super narrative-driven so I do always try to tell a story. With my stuff, it’s never over-staged. We don’t have the luxury of doing ten takes or changing the lighting a millions times. But in the editing room, I try and connect the pieces. We have to have a super-adaptable style. It’s like, We gotta go! But I’ve edited everything I’ve ever shot.

What’s next for you?

I don’t know. Part of me wants to move on from the DETHHEADS U.S.A. but I also love this project. But right now I feel artistically free and I haven’t felt this way maybe ever in my life until this year. I’m enjoying being able to get weird.