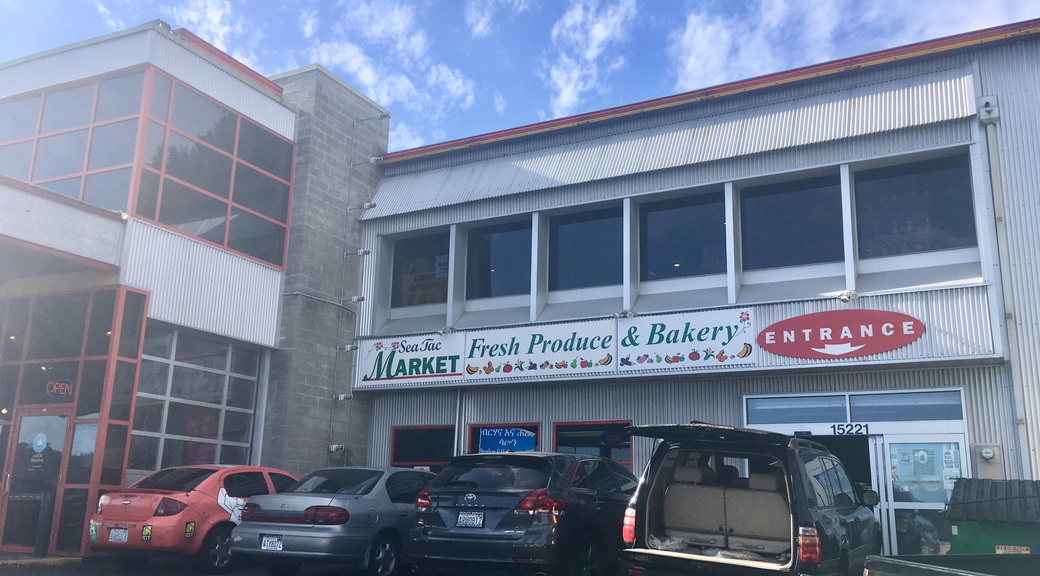 SeaTac Center, the two-story strip mall that takes up a slanted lot between 154th St and 152nd St, is a hub of commerce and culture. The shops that now occupy the location of a former casino and warehouse offer a place for East African, Latino, and Southeast Asian immigrants to gather, shop, eat, and establish their own cultural space in South King County.

However, shop owners and advocates fear that this business and cultural hub of the city of SeaTac will vanish with the sale and redevelopment of this building to The Inland Real Estate Group. The SeaTac City Council approved the sale in a 5-to-1 vote on Dec. 18 as supporters of the existing tenants sang “This Little Light of Mine” to disrupt the discussion.

The vote came shortly after the death of Councilmember Amina Ahmed, who was working to bridge discussions between this community, the SeaTac City Council and city officials. It is unknown how she would have voted on the measure, whether supporting the sale or not.

The city of SeaTac began the process of selling the property earlier this year, issuing a Request for Proposal to purchase and redevelop the property. The city received two proposals, one from Inland and another from a coalition of existing business owners and supporters. The RFP the city issued requested that any buyer prioritize supporting existing businesses or businesses run by immigrants.

Community activist Aneelah Afzali stood before the city council at a Dec. 13 meeting to vote on the purchase and sale agreement, starting a process that will last until late 2019 or early 2020. Dozens of business owners and community members surrounding Afzali as she spoke of the group’s support of development and growth but opposition to this sale.

“The business owners have taken time out of their schedules repeatedly for meeting after meeting,” she said. “They are standing here right now to make sure that you see them, that you hear them.”

The opposition to the sale has grown, with support from around the region, to save a unique space that is run by and supports a community of immigrants, Muslims and East Africans. It follows a plan just down the road that would displace another business center serving the same community just across city lines into Tukwila. That business hub could be replaced by a new Tukwila justice center.

“Our community businesses started in late ’90s, not in this center, but all around Tukwila and SeaTac,” said Abshir Mohamed of Bakaro Mall. “SeaTac Center … became a hub — this is what’s left of all our businesses. Everything else has faced displacement, gentrification, and they no longer exist.”

It’s easy to be surprised by the sheer size and scope of SeaTac Market, the 24,000 square foot retail and restaurant space that takes up the northwest corner of SeaTac Center. Steel bars crisscross the nearly twenty-foot ceiling and fluorescent lights bounce off the polished concrete floor. A sign on the front door advertises camel milk, which can be found in the refrigerator section alongside onions, potatoes, bell peppers, tomatoes and lettuce that are lined up in large plastic crates. Cuts of halal meat in plastic packaging are stacked in a freezer near the register.

On the other side of the produce aisle, you can find spices, flour, oil and other staples of an East African kitchen, along with all the cookware needed to bring the ingredients to life.

Behind the spices and cookware are shelves of ceramic coffee and tea sets covered with delicate, curved handles are displayed on gold-plated trays.

The home decor options continue upstairs in a showroom full of settees, loveseats, ottomans, and area rugs. To the untrained American eye, the furniture is formal and lavish, but these designs are the backdrop for East African hospitality. The living room sets, most of which are framed in gilded gold, feature ornate floral patterns on damask upholstery with tufted fabrics, oversized tassels, and winged armrests. Large area rugs are packed together upright, each one as tall and wide as a tree trunk, blocking windows that look out on to the traffic gliding by on Tukwila International Boulevard.

Across the hall from the showroom lies a banquet hall that still bears the marks of its casino past, with Blackjack-themed designs on the carpet and walls lined with mirrors. It’s packed on weekends with weddings and other celebrations, and the chairs stacked up against the wall are ready to be arranged for the next event.

The restaurant downstairs sits empty on this Saturday afternoon, but the sounds of chopping and slicing echo from the kitchen, muffling the sound of news footage coming from a TV above the bar. No alcohol is ever served here, but you can get a delicious cup of Somali tea spiced with cardamom and cinnamon.

An exit from SeaTac Market leads into SeaTac Wireless, which sells cell phones and international calling plans. Across the hall is a tax preparation office with signage in Somali and Arabic.

Bakaro Mall, a former warehouse, occupies a portion of a strip mall attached to SeaTac Market. From the outside, boxes of incense and perfumes can be seen stacked against the windows next to the entrance. Inside, East African fashion—black abayas, dresses, scarves, leather purses, and skirts—spills out of nearly 30 shopping stalls that line three separate hallways. In each little stall a shopkeeper sells women’s, men’s, and children’s styles that you can’t find at Southcenter Mall. Each stall is packed floor to ceiling with fabrics in myriad patterns and color, with jewelry gleaming in glass cases to match.

In the back corner of Bakaro Mall, a snack bar sells samosas, kept warm in a steamy glass case, along with chips, candy bars, and drinks that are lined up on shelves behind the register. Big plastic containers full of peanut-based and sesame-seed Somali treats sit in front of a humming tea dispenser.

Reggae music drifts down the hallway from the barbershop, where posters of international football stars adorn the walls. It shares a wall with a book store, whose shelves are lined with religious text for adults and colorfully illustrated books for children that introduce the morals and values of Islam.

In the adjoining storefront, the owners of India Plaza are preparing for Diwali. Candles, colorful candle holders, and statues of Ganesh, Lakshmi and Vishnu occupy a next to the front door. A deli case that extends from the register is filled with sweets. Syrupy spheres of gulab jamun glisten next to the orangey swirls of jalepi and silver-speckled kaju katli. Right across the aisle are rows of spices and 20-lb burlap bags of rice and beans. While there’s a variety of cookware in which to prepare these ingredients for a homemade curry, there is also an entire shelf dedicated to ready-made containers of shahi paneer, dal makhana, and tandoori masala.

Celebrations for Diwali and other special occasions are held in Pabla Punjabi Palace, which takes up the second floor of the strip mall.

SeaTac Pizza separates India Plaza from the offices of the Refugee Women’s Alliance (ReWA). Alongside the menu of pizza and other Italian dishes, a “Now Hiring” sign lists the requirements for new employees: “Spanish and/or Hindi fluent.”

As a bookend to SeaTac Market, ReWA teaches English to adult students and gives them access to resources for navigating life in America. It’s a convenient spot for those who work in Bakaro Mall and SeaTac Market, and even on a weekend, class is in session.

Aaron Burkhalter contributed to this report.

One thought on “SeaTac Hub of Community and Culture Faces Displacement”