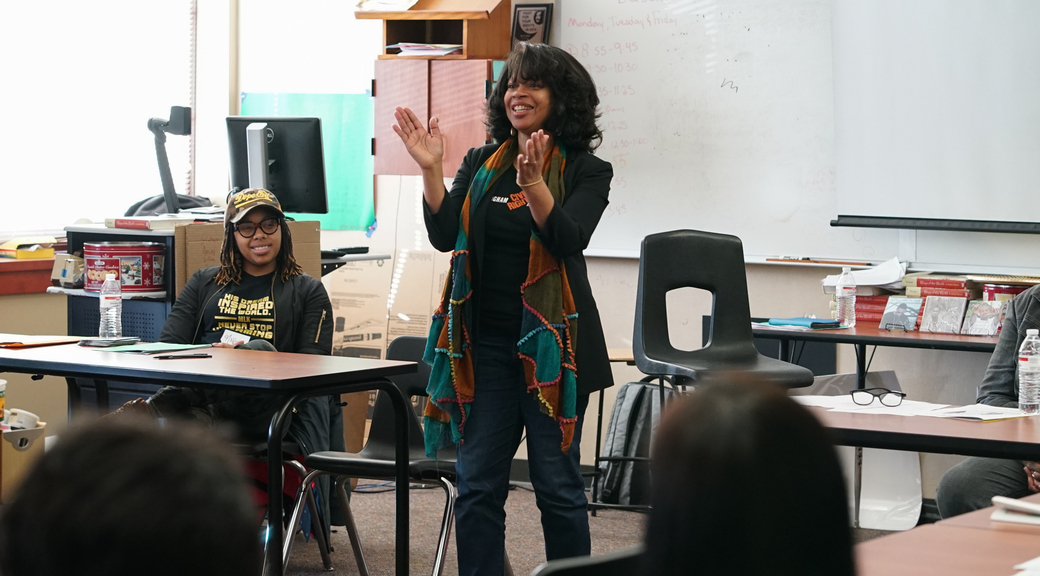 “If it wasn’t for slavery, for unjust Jim Crow laws, for cross-burnings, for police harassment, for separate but unequal schools … affirmative action would not be a necessary tool to dismantle 400 years of oppression,” she said.

You may have seen the signs, “Affirmative Action = Justice, Equal Opportunity in Education, Jobs, Contracts” carried in the annual Seattle MLK Day March. The Seattle MLK Organizing Coalition unanimously chose to support Initiative 1000 that, if passed, would restore affirmative action to Washington for the first time in 20 years.

I-1000 is meant to “guarantee every resident of Washington State equal opportunity and access to public education, public employment, and public contracting without discrimination based on their race, sex, color, ethnicity, national origin, age, sexual orientation … disability, or veteran or military status.”

If enacted, this law will allow the state to fix discrimination against disadvantaged groups and establish a governor’s commission on diversity, equity and inclusion to draft legislation. I-1000 has just been filed with enough signatures to be enacted by the state legislature or be placed on next November, 2019 ballot.

Ware was the first of several speakers to argue for Initiative 1000 and how it could change Washington for the better.

Teacher, editor, and author Dr. Georgia McDade, a founder of the African American Writers’ Alliance urged the audience to speak up to friends, opponents and strangers about racial justice.

Wearing a T-shirt that read “Black Excellence at its finest,” author, pianist and rap artist C. J. Dudley, challenged listeners to make “liberty and justice for all” and to stop doing wrong by digging out the roots of discrimination.

A poet from the deep South, Colin Corpe said that “implicit bias is not the exception and no excuse.”

Unfortunately, racial progress took a hit in our state when affirmative action was banned in 1998 by the passage of Initiative 200. Since then, women and minority owned businesses have lost $3.5 million in state contracts, according to the Yes on 1000 campaign. Also, the percent of qualified African American students admitted to the University of Washington has dropped from 70 percent prior to I-200 to 30 percent in 2017.

According to a recent study by the personal finance website, WalletHub, Washington State does not place among the most racially integrated states or those with the most racial progress, but did rank among the highest voter turnout gap. Washington is one of only eight states that do that have affirmative action laws.

How can our schools remedy past discrimination to reduce opportunity gaps? How can public agencies ensure fair hiring and contracting of underrepresented, disadvantaged groups? An important step is to allow affirmative practices in our public schools, employment and contracting.

In her book, “So You Want to Talk about Race,” Seattle author Ijeoma Oluo advocated for affirmative action citing studies showing that racial bias is still at work. She writes that if you have a “black sounding name, you are four times less likely to be called for a job interview. Black women still earn only 65 cents for every white man’s dollar, black men earning only 73 cent for every white man’s dollar. In education, Black and Hispanic students are far more likely to be suspended, more likely to have to work after schools, less access to Internet and tutoring, more likely to attend underfunded schools, and underrepresented in colleges and universities.”

Affirmative action can reduce or cure that common cold of racism, implicit bias. According to tests of bias, even people who renounce racism, have good intentions, and make a deliberate effort to be fair are very likely to unconsciously tainted by the prejudices in our dominant culture. Research shows employers are more likely to hire family, friends or people with close ties who are more likely to be of the same race. Affirmative action policies may be the best way to help people overcome their unintentional, unwanted biases by ensuring that they recruit, train, and set goals designed to increase diversity.

As Oluo says, “The work to truly end systemic racism, while crucial, is a long and hard road. … Affirmative action can help with that. Even if we were to flip a switch today and end all racism, millions of people of color would still be disadvantaged and need policies to replace opportunities previously denied.”

At the MLK Day rally in the packed Garfield gym after the workshop, Dr. Rev. Kelle Brown of Plymouth Church, challenged all to tell the truth policies that are anti-black and patriarchal, saying, “The bank of justice is not bankrupt.”

At the end of the rally, former State Rep. Jesse Wineberry, reminded all that the nation’s founders had declared independence year’s before they had won it. So, he declared from now on, we are free take on affirmative action for justice for all.