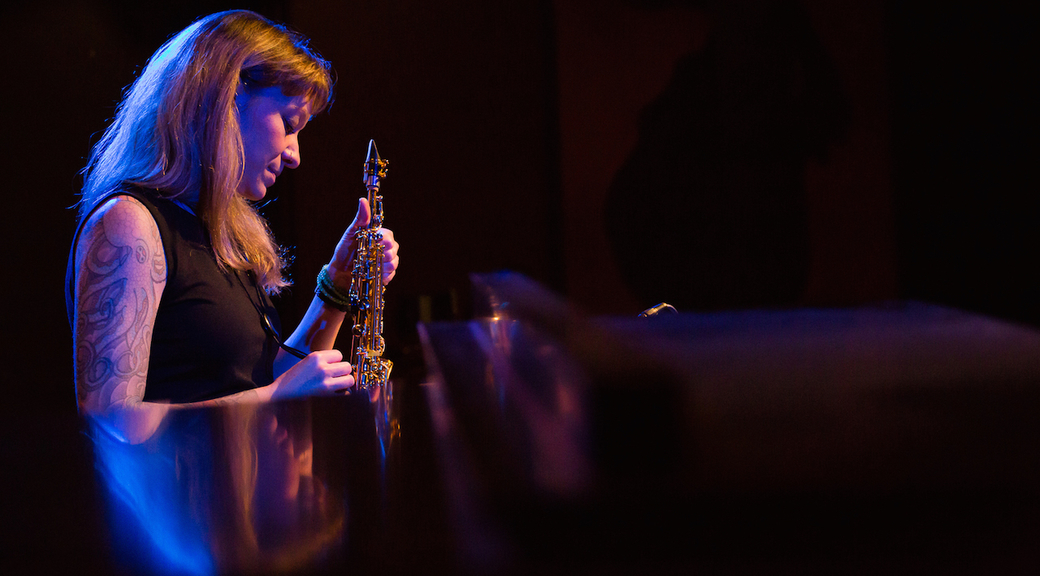 On a cold still night in Columbia City, two of Seattle’s premier jazz combos displayed their grasp of contemporary elegance to a fortunate group of perceptive spectators.

Soprano sax sensation Kate Olson and her K.O. Ensemble assumed the bandstand of The Royal Room first. They began to engage the audience immediately with Olson’s light and coherent original compositions “Pear Shaped” and “To The Left.” Olson’s straightforward swinging arrangements provided a solid platform for her clear and articulate delivery.

On a piece entitled “Way Out” her band began to shine. Drummer Brad Gibson provided a multitude of refined percussive dynamics that illuminated new musical avenues for the exquisite accompaniment of pianist Alex Guilbert and bassist Chris Symer.

Veteran trumpeter Thomas Marriott and his formidable quintet followed shortly after. Tenor saxophonist Rick Mandyck and Marriott commenced with a dramatic harmonized head-riff that engrossed the eager jazz enthusiasts of The Royal Room.

Bursting with brilliance Marriott’s pure tonality was contrasted by Mandyck’s calculated yet chaotic presence as they harmonized on the complex riffs of each original number, blending their unique voices into one solid sound.

Kate Olson spoke with The South Seattle Emerald about inspirations, songwriting and her views on the Seattle jazz scene. This interview has been edited for length and clarity.

GM: What inspires you as a musician?

KO: Personal experience, mostly. I love traveling, and I love to be alone, so having uninterrupted time away from home allows me to be fully creative. I enjoy the natural world, although I’m not super outdoorsy, and a lot of my songs are about natural habitats or people that have stuck with me in some way.

GM: What is your approach to writing original compositions?

KO: I’m an inspiration based writer, although as I mentioned above, it helps to have a large chunk of uninterrupted time. I go through spurts of creativity, where I feel like writing a bunch of songs, and usually those songs come out pretty fully formed. I’m not much of an editor, probably to my detriment, so almost everything I’ve written goes in the book in its original form.

GM: How was the personnel for The K.O. Ensemble assembled?

KO: I work with lots of different musicians in the city, and the trio that you saw backing me up is my favorite group of guys, who I often hire to play with me at Vito’s. All told, there are probably 20 or so musicians who have played in my band over the past three to four years. Seattle is blessed with an overabundance of great players, but also, on any given night, all those great players are working. I’ve had to be flexible in whom I hire, but fortunately for me, the bench is deep, and deep in really phenomenal musicians.

GM: What is the mission of The K.O. Ensemble?

KO: To elevate the voices and compositions of local musicians in the “working musician” class — these are the folks doing the cocktail lounge gigs, the bar gigs, playing their own tunes. The Royal Room show was just my own compositions, but I have music by Tim Kennedy, Geoff Harper, Chris Symer, Michael Owcharuk, Evan Flory-Barnes, Birch Pereira, Alex Guilbert. Basically, if I can get you to play in my band, then I want to take some of your original music and put it in my book for our next performance. This band started out as a way for me to start booking my own gigs, and has gotten me into some pretty exciting and fun performance opportunities.

GM: What is on the horizon for The K.O. Ensemble?

KO: I really want to record this music, and try to bring it to some bigger performance venues, like jazz festivals outside of Seattle. Some of my charts are more than 15 years old at this point, and I’ve yet to make a professional recording of them. I haven’t had any luck with grants yet, so I’m thinking about starting a crowdfunding campaign. All these ideas are in their infancy, but I sure hope 2019 brings a debut K.O. Ensemble record.

GM: What is your perspective on the Seattle jazz scene?

KO: I don’t think I’ve lived here long enough to make my opinion worth much, but I will say that there is a lot of talent here, and pockets of dedication and professionalism that would rival any you would see in New York or Chicago. I think we’d benefit from a little more competition, and more opportunities for young people to perform with older generations. Is it healthy and happening from the perspective of an outsider? Yeah, I think so. I worry that venues like Tula’s or the Royal Room aren’t going to be around forever, and I’m concerned that as the city grows, the scene won’t be as sustainable as it has been in the past. But I certainly hope that won’t be the case.

GM: What is your perspective on jazz in general?

KO: That’s a tough one, because I learned long ago that it doesn’t really make sense to call myself a jazz musician. I’m into so many different types of music, and I think my strengths really lie somewhere between theater music, composition/improvisation, and ambient/experimental music. I’m not a typical jazz saxophonist who has 500 tunes memorized and can play a bunch of Bird solos from memory. Yeah, I went to jazz school, but my heart beats strongest somewhere in the vicinity of minimalism, ambient electroacoustic music, and free improv. Jazz crowds can be really divided around what is and is not jazz, with purists grumping about anything new or different sounding, and younger listeners tuning out anything that isn’t some kind of angular fusion, or heavily rock influenced. I think the heading of “jazz” is still where you’ll find the most interesting, expressive, and cutting edge music in the world, but it’s important to realize that a label is just a label.

GM: How did you discover your authentic voice?

KO: I think I’m still trying to discover it. Growing up in a conservative small town was really rough for me as far as figuring out who I was, let alone the idea that I could be an artist within that identity. I didn’t have any close role models doing what I wanted to do, and although I had some great teachers, I didn’t have any real mentors until grad school. There wasn’t a lot of competition, and I felt like I was always the weirdo, always into the stuff that everyone else didn’t dig that much. I really got into a diversity of influences: Thelonious Monk, Steve Lacy, Philip Glass, Bjork, Brian Eno. … It took me a while to synthesize all of that into a sound that I could call authentically mine, and I’m still working on it today.

One thought on “Kate Olson on Seattle’s Jazz Scene”