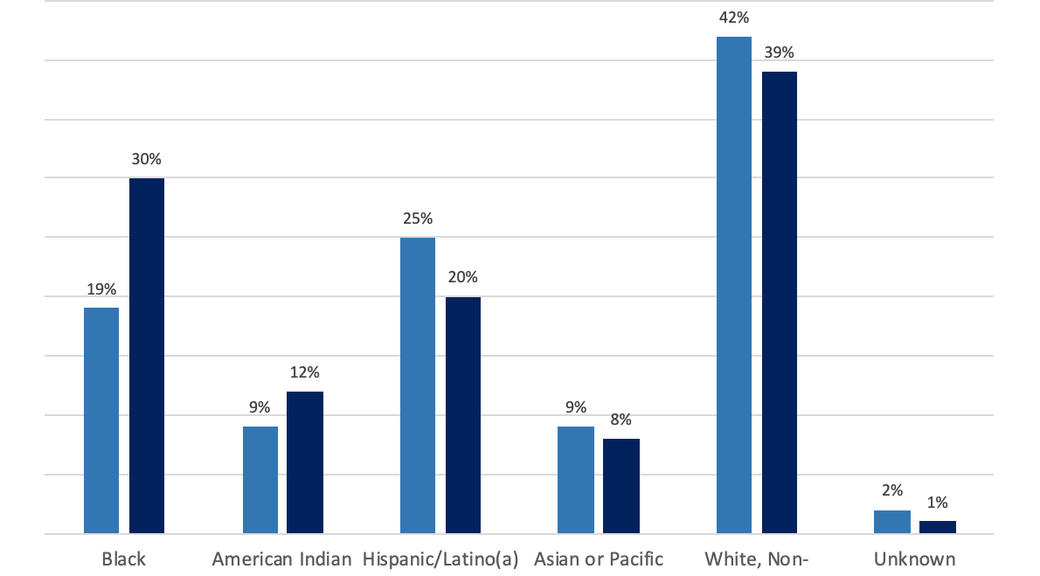 (This article originally appeared on budgetandpolicy.org and has been republished with permission.)

As the Washington State Budget & Policy Center has previously written, Washington has made deep cuts to its WorkFirst program, our state version of Temporary Assistance for Needy Families (TANF), in the last decade. New data reveal that these cuts have disproportionately harmed Black and American Indian families, who — under the harsh, inflexible time limit policy — are more likely to be cut off WorkFirst/TANF than their white counterparts. So although the WorkFirst program is intended to provide critical support to families who are excluded from opportunity, punitive policy decisions have instead further marginalized people of color from basic resources — threatening to deepen racial income and wealth disparity.

This legislative session, Washington state should take steps to address the racist impacts of WorkFirst policy by reversing the cuts it has made over the last decade and creating an Office of Equity to hold government agencies accountable to addressing inequitable outcomes for communities of color.

Black and American Indian families are more likely than other racial and ethnic groups to be denied an extension or removed from Washington’s WorkFirst program due to time limits. Since 2015, nearly one in three people who were cut off of WorkFirst because of time limits were Black, despite the fact that Black people made up just 19 percent of recipients overall.[1] American Indian people were also overrepresented among those penalized under time limits, making up a larger proportion of those cut from the program than the overall recipient population. [2] 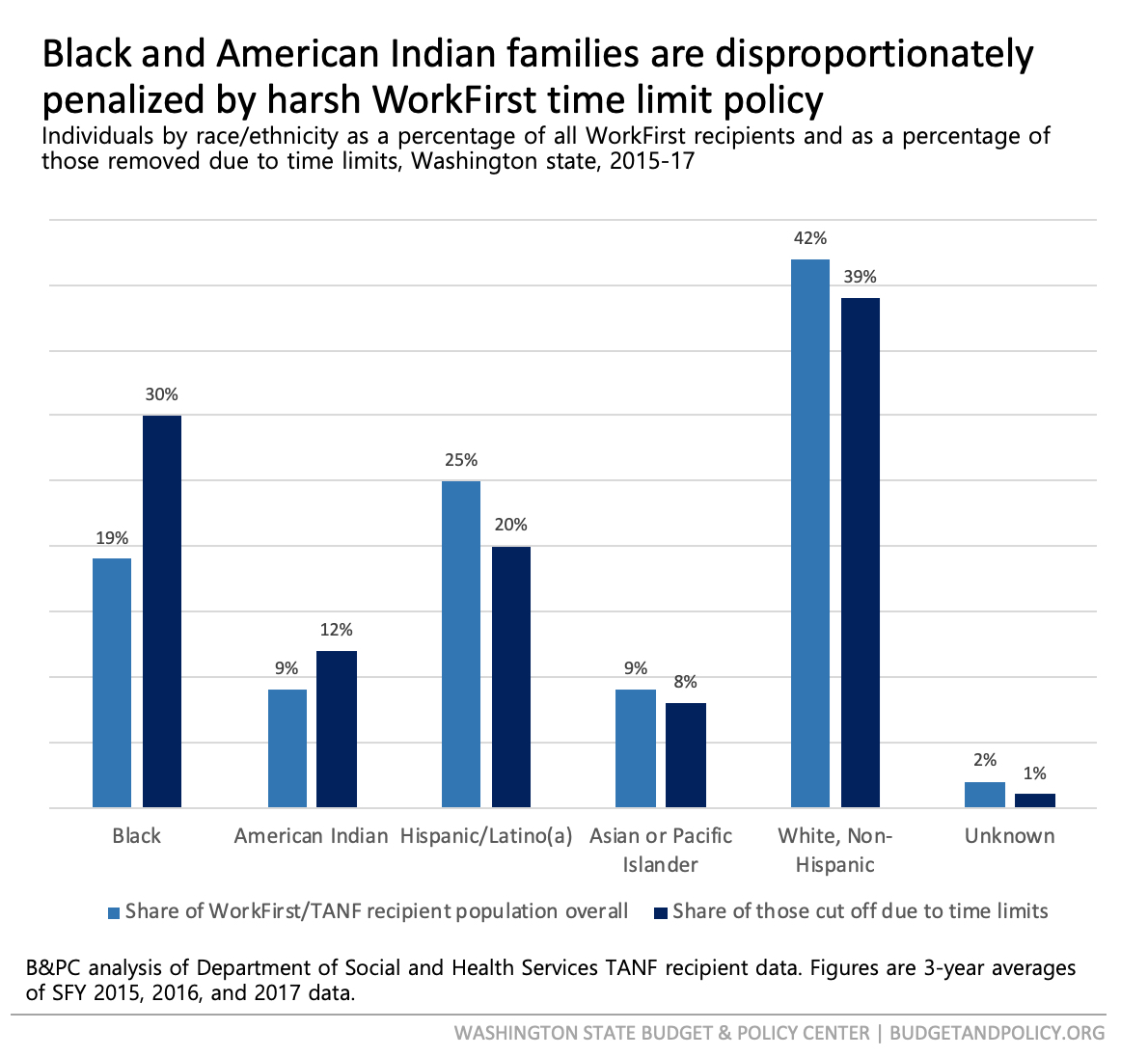 These findings are consistent with research done in other states, which reveals that racism — in the form of caseworker bias and structural barriers to economic security — is to blame for the disparate rate at which recipients of color (especially those who are Black) are penalized under TANF.

Across the nation, researchers have found a pattern of racial disparity in TANF sanctions (penalties imposed when a parent or caretaker can’t meet a specified number of work hours each month). There is strong evidence that people of color, and Black people in particular, are sanctioned at significantly higher rates than whites.[3] These disparities emerge at least in part because TANF caseworkers’ decisions to impose sanctions are informed by racial bias. In states including Wisconsin, Michigan, and Florida, researchers have found that caseworkers are much more likely to sanction Black mothers than they are to sanction white women for noncompliance with program requirements.[4]

While we do not yet have the demographic data to show the extent to which this occurs with sanctions in Washington state, the research suggests that this same racial bias likely operates in caseworker decision-making to approve or deny requests for extensions to the time limit. Caseworkers exercise a certain amount of discretion when they consider whether a family’s circumstances fit within the narrow range of hardship that would qualify them for an extension.

While WorkFirst recipients are technically able to get a time limit extension due to domestic violence, for example, survivors of color face greater barriers to disclosing experiences of abuse (and are less likely to be believed) across a range of public systems than their white counterparts. Women of color are more likely to be wrongly perceived as the aggressor by police in an incident of domestic violence, have a greater risk of becoming involved in the child welfare system after reporting, and face a lack of culturally responsive advocacy services.[5]

While research shows that, overall, few TANF recipients surviving abuse can use the domestic violence time limit extension (because of significant barriers to access for all people on TANF), it’s likely that it is even more difficult for people of color to be approved under this provision. Even when caseworkers attempt to be objective, there is room for implicit bias to affect their assessment – leaving families of color vulnerable to racist decision-making.

It’s likely that Black and American Indian families are disproportionately penalized by harsh WorkFirst time limits because of the barriers they face to securing family-wage jobs and a pathway out of poverty. These barriers are rooted in our nation’s history of white supremacy and economic exclusion. Families of color may not be able to leave the WorkFirst program as quickly as some of their white counterparts because they are constrained by barriers like:

The persistent legacy of racism both renders people of color more likely to face financial hardship and undermines their access to opportunities for upward mobility. As a result, some families of color may need additional time to transition off WorkFirst assistance.

This legislative session, Washington state lawmakers have two immediate opportunities to act to curb racial disparity in WorkFirst by:

It’s critical that lawmakers take these commonsense steps to intervene on racial disparities under WorkFirst, to ensure that all families in our state – whether they are Black, brown, or white – don’t go without the basics. Lawmakers should also work with the Black and American Indian communities in our state to design solutions to address institutionalized racism in how the state serves families of color through its important network of social programs.

[2] Ibid. American Indians were 12 percent of those cut off of TANF due to time limits, but represent just 9 percent of the recipient population overall.

Featured Image: Chart showing how people of color are disproportionately cut off TANF due to WorkFirst policies.