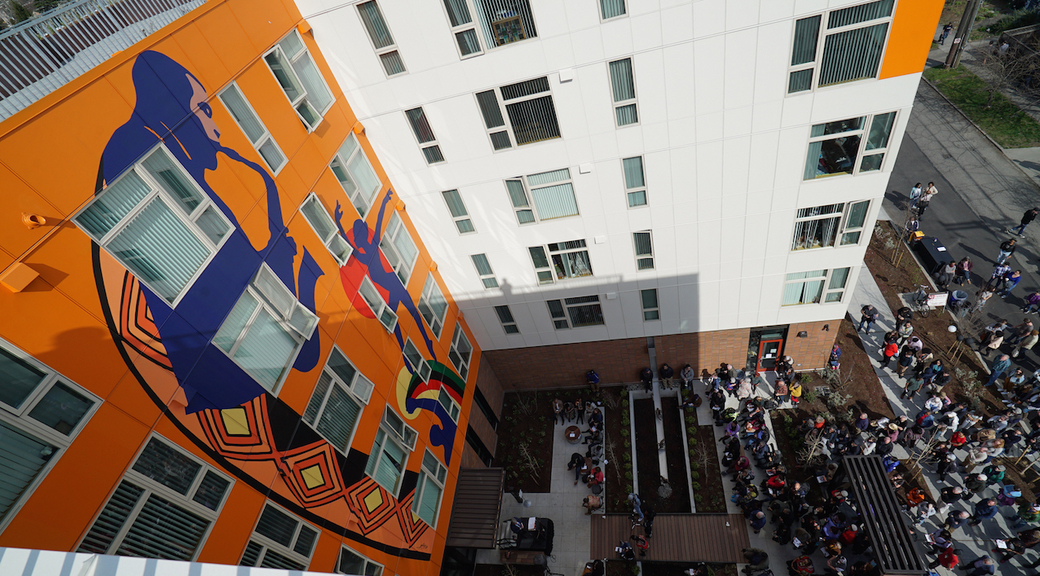 The sun shone down on the crowd, which spilled from a courtyard into the street on 24th Avenue in the Central District. A young child waited for his cue, and then sliced through a tri-colored ribbon: red, the color of blood; black, the color of skin; green, the color of land.

“May the doors open and may the ribbon be cut,” Dr. Marcia Tate Arunga intoned.

The units and commercial space will predominantly serve the African-American community — 87 percent of the units are leased by Black households.

The Liberty Bank Building is a wedge in the heart of the Central District, a bulwark against the twin forces of displacement and gentrification that have pushed families out of the historically Black neighborhood. In the late 1960s and early 1970s, 70 percent of the population of the Central District was Black. Today, it’s less than a fifth.

The building represents a resurgence, said Wyking Garrett, head of Africatown, one of four organizations that worked to make the project come to fruition.

“It is a new beginning. It is a phoenix rising. It is a product of people power,” Garrett told the audience. “Together, we can make the future we want to see.”

In 2012, the idea that a housing complex would be developed at 24th and Union was far from inevitable.

The most recent tenant, Key Bank, had vacated the premises, leaving a single-story building in its wake. That building was the original Liberty Bank, the first African American-owned bank in the Pacific Northwest. Founded in 1968 by a team that included Garrett’s grandfather, Liberty Bank provided financial services to communities impacted by racist banking policies.

Over decades when redlining and racially-exclusionary covenants made much of Seattle off limits, the bank was a cornerstone of the Central District, supporting the Black community as it put down roots in the only neighborhood in Seattle it could.

When Key Bank vacated, community organizations swooped in, determined to save the bank and its legacy from the kind of redevelopment seen elsewhere in Seattle — shiny, new, unaffordable apartments that would only hasten the demise of the dwindling African American community in the Central District.

There was tension between pressures to preserve Liberty Bank and to redevelop it for the good of the community, said Christopher Persons, CEO of Capitol Hill Housing. Ultimately, leaders found a way to do both.

“Over time, from that rivalry an unlikely partnership you’ve heard a lot about today was formed,” Persons said.

Africatown, Byrd Barr Place, the Black Community Impact Alliance and Capitol Hill Housing banded together to redevelop the Liberty Bank site. They stitched together $34 million from a variety of sources including $12.2 million from Seattle’s Office of Housing and $10.1 million in tax credit equity and used that money to walk the walk — more than $5 million went to women and minority-owned businesses. Nearly $3 million of that went to Black-owned businesses.

The result was a building that is unapologetically Black.

At the front of Liberty Bank Building looms a mural of a man playing saxophone and a woman dancing, both in purple against a backdrop of orange. The trim of the building, designed by curator Al Doggett, is a series of geometric shapes in tones of orange and brown with two faces. Statues in the courtyard depict animals found in Africa. The logo, a cursive L embracing a B, is the original design for Liberty Bank.

Even the alignment of the bricks is meant to evoke a pattern in the clothing of African men and women.

The creators were sure to include elements of Liberty Bank itself. The portcullis is adorned with old lockboxes, and the massive bank vault door is situated inside the building, a gleaming testament to the bank’s legacy.

Doggett and Esther Ervin of Al Doggett Studio brought in eight Black artists to transform the common spaces on the ground floor into a monument of the past and a call to the future. The works include Seattle artists that celebrate and commemorate the African diaspora, such as Lawrence Pitre and Inye Wokoma.

As residents approach their lounge, they will see the faces of the original team that founded Liberty Bank, as well as the architects of the building, created by Lisa Myers Bulmash. Bulmash researched each of the founders, in some cases contacting family members to get photographs and materials to bring them to life.

Myers Bulmash used their faces to tell their stories, layering text and other media into the highlights of their cheekbones and foreheads, embedding the details of their lives into their faces.

Each has an encyclopedia adorned with a sand dollar, a brittle shell that plays with the concept of the bank and the ephemeral nature of money.

The images are meant to be more decorative than a history lesson, but Myers Bulmash’s work creates a tangible way for residents to connect with the past.

“I had more the mission of nudging people to learn more,” Myers Bulmash said.

Liberty Bank Building has its own room for residents to engage in arts and crafts or other projects. Artist Aramis O. Hamer set the tone for that space with a massive mural that takes over the western wall.

Hamer created a cosmic backdrop of blacks and purples using acrylics and a touch of spray paint. The word “Liberty” is spelled out in gold chains, a nod to hip hop culture but also the legacy of slavery and the strength of Black people. Multicolored hands reach up from the base toward the word and bills, each with the face of a Liberty Bank founder.

As the afternoon wore on, White faces that had dominated the crowd disappeared. The Black community stayed, chatting, smiling, eating, enjoying the warmth and sunshine as beats pumped through speakers.

Nansare Consolata, a business owner, grew up just around the corner from the new development. The neighborhood has changed since she was displaced from the Central District (she moved to Renton).

“Change is good,” Consolata said. “But we have to be able to afford it without stress.”

Developments like the Liberty Bank Building provide that opportunity. “It means a lot, having grown up here,” Consolata said of the building.

Community members came out to celebrate the launch of the Liberty Bank Building, but they are not done. The forces that have pushed Black households out of the Central District have not abated.

When leases for units in the building became available in November, thousands of calls came in, Garrett said — so many that the phone lines jammed. The demand is there, the desire is there. Black families want to live, work and play in their city, to be able to make a living and also spend time at their children’s schools, Garrett said.

In that, the Liberty Bank Building is one development where the community needs dozens. But it’s a start.

“It’s still one drop to start filling an ocean,” Hamer said. “It’s awesome to celebrate this one drop.”

Featured Image: Hundreds of people showed up for the official ribbon cutting ceremony for the Liberty Bank Building on March 23. (Photo: Susan Fried)

Ashley Archibald is a Staff Reporter covering local government, policy and equity. Have a story idea? She can be can reached at ashleya (at) realchangenews (dot) org. Follow Ashley on Twitter @AshleyA_RC