by Aaron Burkhalter
with reporting by Alex Garland

People shared the post more than 300 times, igniting an online debate over the city’s response to homelessness. And the claims were grisly, but ultimately remain unconfirmed: A body was found at an encampment on Beacon Hill, the post claiming that the person was found decapitated with a bloody saw nearby.

It’s sad, but not surprising that someone has died outdoors in Seattle. Homelessness is growing every year, with 6,320 people sleeping outdoors in King County, according to the 2018 annual point-in-time count conducted by All Home King County. Without shelter, people die.

But this post, shared by the controversial Safe Seattle Facebook page, claims that the person who died was decapitated and decomposing inside a tent with a bloody saw nearby.

“I don’t know why it’s not a big story,” the post reads, coupled with a map of Beacon Hill showing where the body was found.

The story has gained a life of its own. Some — particularly a vocal group of Seattle residents questioning Seattle’s spending on homelessness efforts — say the story and lack of details are evidence of corruption meant to make the city look better. Others have questioned its accuracy of the posted information and criticized Safe Seattle for spreading unconfirmed news that would stoke fears about a vulnerable population.

But as of now, there is no confirmation of almost any of the facts, other than there being a body found in that location. But the story spread anyway, not only on social media but also on news radio. 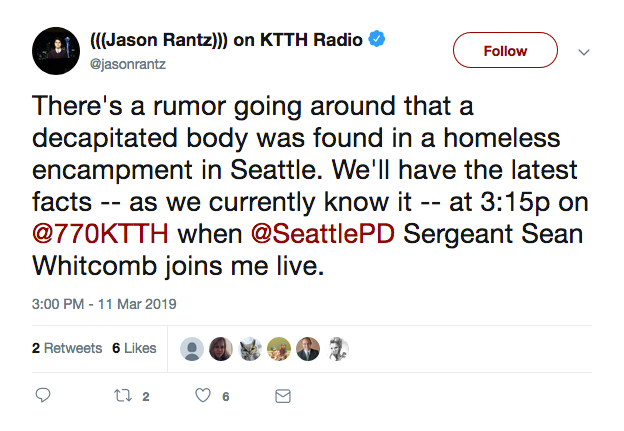 The Seattle Police Department (SPD) remains cautious with its wording, but said the cause of death has not been determined. The department is awaiting a report from the King County Medical examiner.

Police department Spokesperson Sean Whitcomb said he has heard nothing to indicate a homicide and cautioned against spreading news without more information, but said he wants SPD to remain responsive to people and their concerns.

“We do not support rampant speculation,” Whitcomb said. “But at the same time, we want to remain accessible when people have questions about police responses in their neighborhood. We have worked very hard to develop a track record of transparency.” 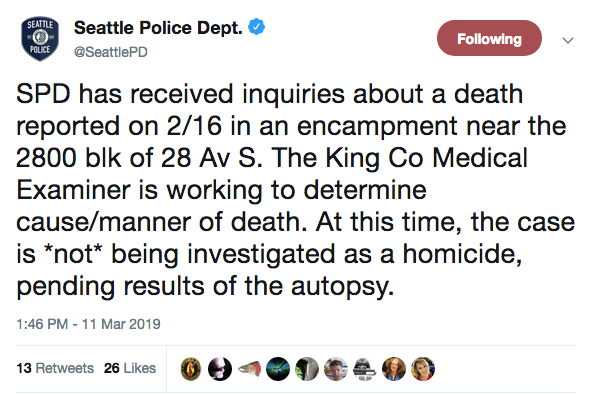 David Preston of Safe Seattle described how the post came together. The post was made without verification.

“A known source contacted me privately with a tip,” Preston wrote to the Emerald. “His account was credible and my instincts told me he was telling the truth. I asked him if he had direct knowledge of the events and he said he did. The source gave me a police report number and it pulled up nothing, but I don’t consider that a deal breaker.

“Nevertheless, I sat on the story for a bit, trying to gather more info without tipping anyone off. After three days, that process hadn’t yielded anything, so I went with what I had in hopes that others would step forward with more info after it was published. That strategy proved to be somewhat effective, but these things never happen as quickly or smoothly as you’d like them to.”

Critics online say that stories like this are a pattern for Safe Seattle, playing off people’s worst characterizations of homeless people and the city. Brett Hamil, a local comedian and writer, described the group as “weaponizing” social media, not only with posts like this but interactions with other people on Facebook and Twitter.

“These people have been kind of pumping out sensationalistic stuff on their Facebook page and such for years now: putting out fake statistics and whatnot,” Hamil said. “They feel they have no obligation to the truth.”

While it remains visible on Safe Seattle, one Seattle City Council candidate, Ari Hoffman, has backed off of the story even though he initially shared it. He has since deleted his repost of the Safe Seattle story after criticism came his way, particularly as someone in the public eye running for office.

“In the past I have posted stories from Safe Seattle, and never had a problem with accuracy and I assumed it was reliable and it was my error, and I should have confirmed the facts before I posted it,” said Hoffman, who is running for the City Council’s District 2 seat, which covers Southeast Seattle.

“When the medical examiner thing comes out and says it wasnʼt a homicide, I will write a full retraction and apology with regards to that, 100 percent,” Hoffman said. “I have no problem admitting when Iʼm wrong. Iʼm not a politician, Iʼm a guy whoʼs doing this because he wants to fix the city.”

Preston remains confident in the information.

“I didn’t read Ari’s post or suggest to him that he share our story,” Preston wrote. “I understand why he eventually took it down, though. He didn’t speak to the source, so from his perspective, it was a riskier proposition. He took heat for sharing the story, but he never blamed that on me. That shows character.

“My take on the information is that I believe the source, period. If I hadn’t thought the story was true in the main, I wouldn’t have run it. I couldn’t care less whether people get angry at me over this or whether SPD decides to play coy. Those kinds of considerations have no bearing on whether I run a story.”

Hamil does not expect Safe Seattle’s practices to change, and wants to see more pushback from the community.

“There does reach a point where people in Seattle and political people involved in the scene have to say enough is enough,” Hamil said.

Alex Garland Contributed to this report.

Featured Image: A screenshot of the Safe Seattle post that ignited a debate over the claim that a homeless person was murdered.