Box Brown’s graphic novel Cannabis: The Illegalization of Weed in America, explores the long, racist history of cannabis prohibition in the United States. It’s a history of fabricated studies, hate-mongering, and propaganda. 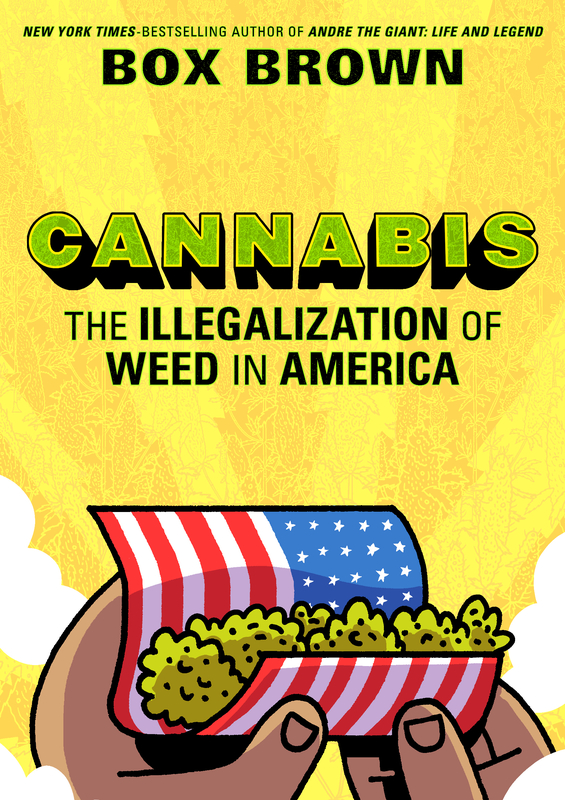 “Mexicans have come here with this marijuana and they’ve taken the jobs we need to put food on Americans’ tables,” a character says. “They’ve been smoking reefer and committing crimes.”

“It was important to me to point out that cannabis use has been around since before written history and it’s only been illegal for the last 83 years,” Brown writes in an email to the South Seattle Emerald. “I also wanted to point out how America forced cannabis prohibition on societies that had extremely long histories with cannabis. Sometimes I get the feeling that people think cannabis was invented in the 1960s by The Hippies.”

At the book’s center is Harry Anslinger, who drove opposition to cannabis using fake news stories. Cannabis also follows President Richard Nixon’s targeting of Black communities and the international effects of outlawing cannabis in the U.S.

Last month, Senator Booker introduced The Marijuana Justice Act. The bill would expunge possession convictions and reinvest in communities affected by the war on drugs.

In Cannabis, Brown examines a medical and cultural consumable and considers the harm done by America’s cannabis ban. Box Brown will be reading at Third Place Books Seward Park on April 10 at 7 p.m.

Brown spoke with the Emerald by email about his graphic novel, the damage done by cannabis prohibition, and challenges facing legalization.

This interview has been edited for length and clarity.

You’ve written before about Tetris, Andy Kaufman, and Andre the Giant. What led you to write a book about the history of racism and injustice around cannabis legislation?

I was arrested for cannabis possession when I was 16 — 1996.  Since then this has been an extremely passionate interest of mine.  It just didn’t make sense to me that cannabis possession was treated with handcuffs, probation, possible juvenile detention, court, etc. and underage drinking was treated with a phone call home. While going through the court system, I saw first-hand how people of color were treated compared to me, a white boy from a white suburb. I was able to administer my own urine test with no witnesses, others weren’t and I was let off two months early.

I found out in my research that in 1996, the year I was arrested, the Clinton administration was looking to be tough on drugs and the number of people arrested for cannabis in the U.S. in 1996 doubled from the previous year. I was caught up in Clinton wanting to be perceived as tough on drugs.

Studies come out all the time and are then refuted.  It still happens to this day.  In the case of Nixon, he purposely put together a group of people he knew would basically lie about the effects and then it would be in a government study.  People tend to use studies to push forgone conclusions and, because of cannabis scheduling, we don’t see normal and varied scientific studies the way we do with every other substance in the world. There’s just a lot of room for misinformation to enter the picture and a lot of people interested in keeping cannabis illegal.

What drew you to the themes of social injustice throughout Cannabis?

To me … this is the whole story.  There a lot of talk now about legalization in terms of the cash it’s going to bring in.  But ending prohibition is righting an 83-year-old wrong. It’s always been wrong, it’s never been dangerous. New Jersey is still arresting 89 people per day even while they have impending legalization laws coming down the pike.  That’s 100 percent wrong.  The more I look at legalization, it needs to be two separate pieces of legislation: one to legalize possession and cultivation, expungement and release and then a separate bill to figure out how the state is going to make money on it.

What were the “Gore Files” and how did they influence our view of cannabis?

The Gore Files were a series of stories written by Anslinger himself and published in newspapers.  Basically he would take grisly murders and sad stories from around the U.S. and would insert cannabis into them and rewrite them as fact.  Basically every paper in the country was publishing stories regularly saying cannabis would turn you into a murderer.

Cannabis has a sense of humor. But white supremacist violence and Anslingers’ gory fantasies fill the book. How did you balance tone for a history that’s so destructive?

I think comics as a medium helps.  It can help people process difficult stories.  It’s a way to depict violence in a way that’s digestible.  I do not like depicting violence either, that’s not why I got into comics.  I want to depict stories with empathy but at the same time we can’t look away from the difficult parts. That makes them fester.

How do you think legal cannabis achieves racial equity?

I think we need release and expungement immediately. That’s No. 1.  We also need easy small business access with homegrow.  This should be an easy business to get into.  In Pennsylvania and many other states, we see only very large corporations gaining access to the market.  Only seven (all out of state) companies are allowed to grow cannabis in Pennsylvania.  This leaves out not only people of color but all residents from gaining an ownership stake in the market.  So, not only do we need to have tiered licensing that allows for cannabis operations of all sizes, but I think we should have special provisions that help people who have been arrested and imprisoned for cannabis access the legal market.

There was an article on NPR recently linking daily cannabis use and highly potent strains to increased rates of psychosis. Do you feel like disinformation battles around cannabis are still happening? How do you understand what’s true?

I know the study and the article you are talking about. Any time a study is done into psychosis and cannabis we see headlines of “Cannabis Causes Psychosis.” This is a lie made up by Harry Anslinger and furthers the cause of prohibition and every time it comes up it is the same lie.  These studies never prove causation — only in some cases a correlation between people who are diagnosed with psychosis and cannabis. The fact that cannabis has been used by various populations for decades at disparate rates yet the rates of psychosis have remained the same is a strong argument against causation.

This is a problem across society not just with cannabis.  Look at the problem with flat-earthers or anti-vaxxers.  People need to have a strong ability to think critically to separate real studies from scare tactics.

The book ends with a feeling that there’s a kind of destiny between humans and cannabis, something fated or almost spiritual. Can you tell me a little bit about your view of the relationship between people and cannabis?

People are going to use cannabis regardless of its legal status. The idea that prohibition curbs use is very naive and silly. People smoke cannabis in prison. It’s an abundant natural therapeutic resource that has never killed anyone via overdose. You can’t say that about almost any other consumable. I think it’s something that helps people cope with daily life, just like coffee and aloe.  Not allowing people to take advantage of something that can help them is just cruel.

After California passed Proposition 215, Dennis Peron said the legalization of medical cannabis was “the beginning of the end of the War on Drugs.” That was over 20 years ago. What do you see as the biggest challenge to legalizing cannabis in America?

This staggered legalization thing that’s happening has allowed a lot of bad actors into the scene.  The power of corporate cannabis is real. The West Coast is looking to subjugate the East Coast under its corporate thumb. Companies like Medmen, Moxie and others who don’t even want their names out there have accumulated a lot of power over this plant.  They are using it to oppress us even in legalization.  In California they legalized homegrow first.  On the East Coast they’ve ripped it from our hands.  It’s ugly. It’s going to be a long push and pull.