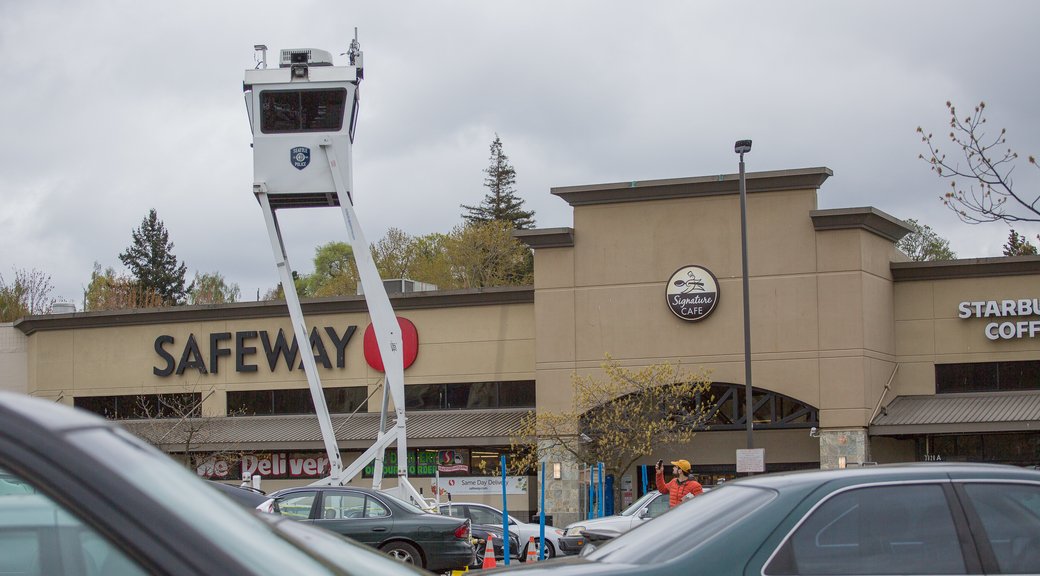 The white box, large enough to hold a police officer to monitor the parking lot and grocery store, sits on top of long, white legs and a lift mechanism. An SPD crest can be seen on its sides. It has stood over the parking lot since at least April 9.

“My first thought, when I saw it, was that I didn’t like it,” the Columbia City PCC employee said. “I guess I want to know why, and there is nothing that says why they are here. If they are going to have a tower in the middle of a parking lot, they’ve got to tell us why. Anytime I go to a demonstration, they want to know why we are there, and why we are taking up space, and give us our rights, so I want to know the same thing.”

Houston is one of several Safeway customers who peered warily as they passed the box, with its shaded windows and loudspeakers after its appearance at the Safeway on Rainier Avenue South and South Andover Street in early April.

The box communicates a message of surveillance in a community already weary of the Seattle Police Department, which was under court-ordered monitoring due to a 2011 Department of Justice report that found officers had a pattern and practice of excessive force. The report, which also examined whether the department had bias in its practices, led to the Community Police Commission and other oversight systems. Community members across Seattle have been reluctant to accept technology that is used to monitor a large area, such as gunshot detectors that former Mayor Mike McGinn considered purchasing in in 2012.

Seattle Police Department spokesperson Sergeant Sean Whitcomb said the department put it there after police data showed the location is the number one location for service calls in the entire south precinct. But the department receives more service calls in a number of other places; the Safeway is ninth for calls for service throughout the entire city. Most of those calls are for shoplifting, he said, but that doesn’t just mean “someone walking out of the store, and failing to pay or refusing to pay.” It can include threats and assault. The department is also watching for car prowling and robbery.

Longtime community resident and journalist and photographer Naomi Ishisaka said this kind of police presence in the South End isn’t helpful, and that the tower is reminiscent of “a prison guard tower.”

“To see that kind of police presence, literally watching over us in that way is really reminiscent of things in a dystopian future,” Ishisaka said. “And can we remember, as well, the history of Japanese-American incarceration, which affects my family. That’s a very ominous presence to have in the neighborhood and in the community.”

Moreover, she said, this kind of “over-policing” and surveillance often leads to deadly confrontations and mass incarceration, especially amongst the Black community. And while there has been shoplifting and property crime in that area, Ishisaka said the tower isn’t a good strategy to mitigate the issue. Anytime the police are involved, she said, there is also the potential for them to use deadly force.

“It’s important to recognize that that doesn’t necessarily mean that many people who are experiencing a threat of physical violence from another person. They are talking about 9-1-1 calls from the store that somebody stole a six-pack of beer, or whatever,” Ishisaka said. “It’s really important to me that we make that distinction around what type of activities warrant deadly force. And I think, in this case, in the Safeway parking lot, we are saying that shoplifting from Safeway is so important as a public safety issue that it warrants deadly force. And I don’t think that’s true.”

No New Youth Jail advocate Devon Knowles said the location of the watchbox outside the grocery store is yet another expression of the criminalization of poverty, and creates another penal channel from the South End.

“Why are people shoplifting food, and what kind of resources are available to them that they are put into the position of shoplifting food? And, again, why are we criminalizing that such that physical altercations are developing, as a result of that action?” Knowles said. “I think it gets back to this idea: a) why are people in poverty; and b) why is poverty being criminalized, and why are only certain people being surveilled, and funneled into this criminalization process?”

She said the tower doesn’t surprise her, though, and is “just part and parcel, in terms of SPD investing in this mechanism of surveillance, rather than the city investing in these communities.”

Whitcomb said the box doesn’t have cameras and isn’t staffed 24 hours per day. He said there was no extra cost to the box, because it’s something the department already had and has used in the past in other parts of Seattle, such as at Seahawks games. He said it had the intended deterrent effect on crime but said that if the crime rate didn’t drop in this location, the department would revisit the strategy.

Whitcomb acknowledged that the department has gotten complaints about the “optics” of the box, and said there have already been discussions within the department about it. He also said it was one of a range of policing strategies that include both uniformed and plainclothes officers.