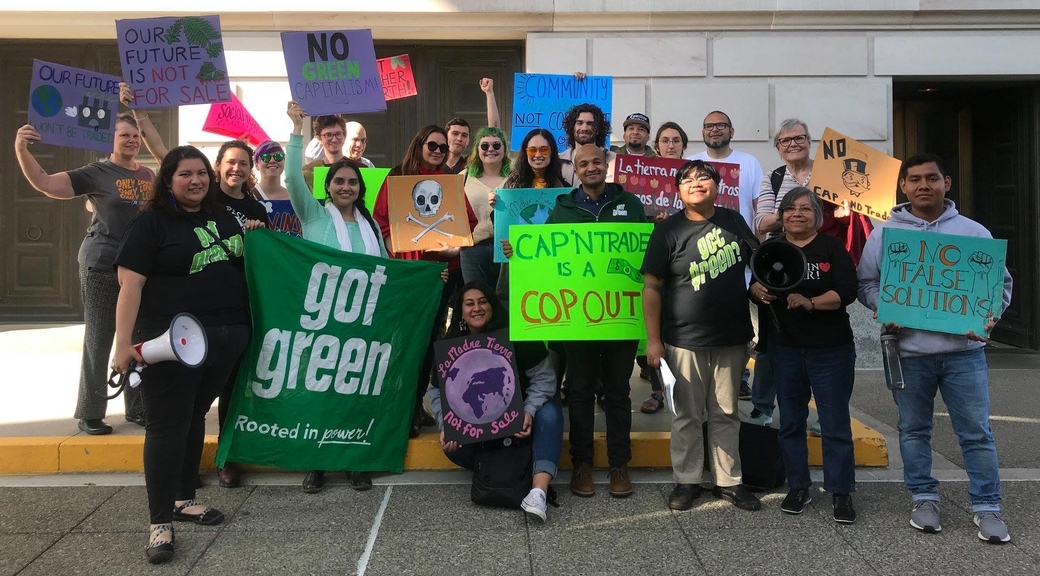 Cap and Trade is a False Solution to Climate Change

by Jill Mangaliman and Edgar Franks

“How can you buy or sell the sky?”

These words by Chief Seattle resonate today, especially when there are contradicting proposals for climate action that pit profit against people and planet. Cap and Trade — also known as Carbon Markets — are “market-based” schemes introduced for and by major climate-polluting corporations in order to claim they are taking meaningful steps to limit (and over time) reduce their greenhouse gas emissions.

In reality, such schemes are designed to provide the major polluters a large degree of flexibility to ensure their profits and investments are protected, while they seek “business friendly” ways to reduce their carbon emissions.

The first time I, Jill, heard about cap and trade was in 2014, when Community to Community Development and Got Green attended the Climate Justice Alliance Our Power Convening in Richmond California. It was the first time I entered a space for climate and environmental justice that was led by people of color, indigenous people, youth and workers. A space for “people on the frontlines” I didn’t know existed.

We attended a workshop led by Mari Rose Taruc, Asian Pacific Environmental where she shared the challenges environmental justice groups in California had fighting cap and trade against the democrats and green organizations who were in alignment with Big Oil. Sure the cap and trade made millions of dollars, but it didn’t benefit the communities living near polluting industries because corporations would be able to buy credits to continuing polluting.

During the toxic tour at the Chevron Refinery in Richmond California, we heard stories from local residents and youth of Communities for Better Environment sharing how there have been multiple explosions and fires at the refinery and how everyone in the city had respiratory problems, including the Mayor, and how they wanted this refinery to go away and transition into something healthy for their community.

I was a newbie to climate justice world, but I could tell what was right from wrong. When we returned to Washington, we took back these lessons, stories, and warnings to our organizations. We were committed to do everything in our power to stop cap and trade and any other false solution that would harm our people and our planet.

So began a long battle. We protested cap in trade during the People’s Climate March in Seattle, we challenged politicians and white-led environmental groups in their support of cap and trade. When the white-led mainstream environmental groups brought their experts to the coalition (policy makers and economists who can technospeak, but didn’t listen or know our conditions) we brought in our experts from frontline communities and environmental justice groups who had years of fighting the fossil fuel industry both nationally and internationally. They taught us how to spot false solutions, how to affirm our experiences and community knowledge, while mainstream groups and consultants continued to divide up our communities with promises of the money that would be raised from the cap and trade programs.

In 2018, at the Protecting Mother Earth conference led by Indigenous Environmental Network in Nisqually territory, we had the opportunity to hear from the people who are internationally affected. We listened to Chief Ninahaw share how his tribe in the Amazons were being divided and pushed off their land, because of offset programs. They were receiving threats for speaking out against the Reducing Emissions from Deforestation and Forest Degradation program (REDD+)  and the Tropical Forest offset program. These carbon markets and offset programs undermine indigenous people’s sovereignty and treaty rights, while also removing those who are taking care of the land for decades.

A move towards cap and trade would be a nail in the coffin to our communities. It would preserve a future where politics and daily life will continue to be dominated by fossil fuel corporations. Last year we saw a glimpse of how oil money was poured in to influence an election. Over 35 million dollars was spent to defeat an initiative that came from the people of Washington.

In Oregon, Cap and Trade is also being proposed. While HB2020m sounds appealing as its main message is that it creates “clean energy economy with green jobs,” environmental justice groups are rejecting it.

“In California, we see that, under a cap and trade regime, emissions from oil refineries have actually increased, particularly in low-income communities and communities of color,” says Huy Ong, Executive Director of OPAL Environmental Justice Oregon. “There are better alternatives that don’t harm frontline communities, which is why we oppose Oregon’s cap and trade bill, HB 2020.”

It’s true. According to the Preliminary Environmental Equity Assessment Of California’s Cap-and-Trade Program, California in-state greenhouse gas emissions have increased, on average, among several industry sectors since the advent of cap-and-trade. The reality is that the neighborhoods near the top-emitting facilities that increased emissions were poorer and had a higher proportions of people of color than neighborhoods near top-emitting facilities that decreased their emissions.

We have seen other reports showing that carbon markets is not about reducing emissions. According to a new report, 50 Shades of Green: the Rise of Finance Capital and Sustainable Finance by Green Finance Observatory, carbon markets have spectacularly failed to curb greenhouse gas emissions for over a decade. A new analysis finds California’s cap-and-trade program may vastly overestimate emissions reductions by 80 million tons of carbon dioxide. Meanwhile landowners are earning millions of dollars for carbon cuts that may not even happen.

Just like OPAL said, there are better alternatives that we can do that don’t harm our community, but can usher in the just transition away from an extractive fossil fuel economy to one that is regenerative and healthy for people and the planet. Some of these things are already happening and our communities are at the frontline. We could remove subsidies from the fossil fuel industry or actually making them reduce their emissions by regulation. A cap is great, but it does not need the market loopholes like trading credits and offset programs. Part of the Just Transition is fighting the bad and false solutions like cap and trade and other corporate schemes to make money off the climate crisis.

We oppose cap and trade because we want real action that sets us on a path towards justice and building a Just Transition. Our community is fighting to keep Washington as the Evergreen State. If Cap and Trade or other market based false solutions are implemented, our state’s land will be sold to the highest bidding oil company. The water will be just another commodity. The air will be filled with thick clouds of smoke from burning forests. This is not the future we want. Join us in fighting for our future and the future of our planet.