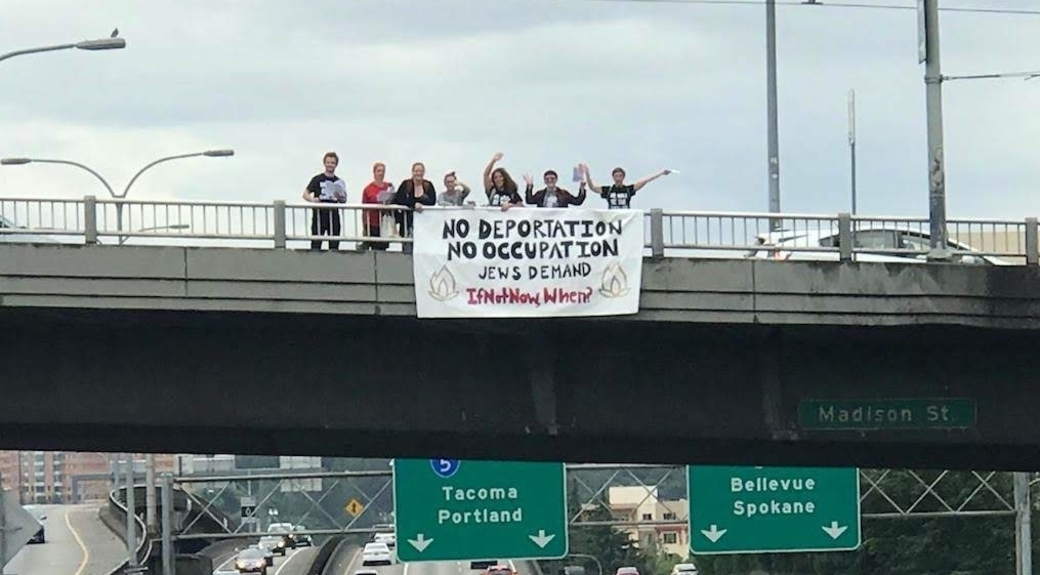 Earlier in May, the Jewish Federation of Greater Seattle hosted a Community-Wide Safety Training Series led by the Department of Homeland Security, Seattle Police Department, and Anti-Defamation League — all institutions infamous for promoting militarism and racism. As young Jews, we can’t help but wonder why we should take safety advice from organizations working to make us unsafe. We believe that instead of perpetuating the ideologies built to destroy our communities, Jews in Seattle can find real safety in solidarity with other communities threatened by white nationalism.

The uptick of violent anti-Semitic attacks, particularly in places of Jewish worship, are terrifying. They propel us to seek protection. As Jews, much like other communities who have experienced widespread violence, we hold internalized trauma from years of brutality and discrimination; these attacks bring up a lot of pain for us.

But by cozying up with institutions that have deep legacies of racism and violence, the white Jewish community is sending the destructive message that our protection and freedom must come at the expense of others, even though we know true safety actually lies in building powerful coalitions amongst all communities under attack by white supremacy.

We cannot fight anti-Semitism with the help of the Department of Homeland Security, the police department, or the Anti-Defamation League. The Department of Homeland Security is currently bent on tearing children away from families at our southern border. It has a history of ugly human rights abuses — from providing slow and limited aid for Black and Brown families hit hardest by Hurricane Katrina, to destroying humanitarian supplies left for poor and injured Central American migrants fleeing deadly violence. The Seattle Police Department has only recently been removed from federal court supervision for its history of excessive use of force and mistreatment of people of color. The Anti-Defamation League has a dark history of promoting Islamophobia in the name of “counterintelligence,” surveilling progressive movements, and repressing Palestinian rights.

When Ashkenazi Jews (Jews of European descent) team up with militarized law enforcement, we send a message to our Sephardic and Mizrahi siblings (Jews of Middle Eastern, North African, Central Asian, Balkan, and Spanish descent) that they are no longer safe in Jewish spaces. When we welcome these agencies into our community, we become complicit in supporting and continuing white supremacy.

We are also deeply concerned that welcoming Homeland Security, the Seattle Police Department, and the Anti-Defamation League into our community can have the result of confusing potential allies even further about anti-Semitism, leading to the dangerous thinking that standing against anti-Semitism means being complicit with Islamophobia, racism, or militarism. Siding with institutions that use militarized violence and racism distances Jews from other marginalized communities. In doing so, we are performing white nationalists’ work of “divide and conquer.”

And yet, as Jews, we are one of the many targets of white supremacy. The shooter at Poway Temple in San Diego wrote a manifesto applauding the killings of Muslims at Christchurch in New Zealand and called on others to shoot up both synagogues and mosques. At the Unite the Right Charlottesville Rally, calls of “Jews will not replace us” rang from the mouths of self-identified Klansmen.

White supremacy wants to erase Jews, as well as Muslims, Black and Brown people, poor people, people with disabilities, LGBTQ+ folks, and countless other communities. If we know that institutions that advance white supremacy are a threat to Jews and our siblings, why are we allowing them into our sacred spaces and calling it security?

Instead of having a safety training that sets us apart from our natural allies in the fight for justice, we need to be working to dismantle white supremacy in coalition. This has proved successful in the past. Jews were critical to the American Labor, Civil Rights, Women’s Rights, and Gay Rights movements. Our tradition is rooted in justice for all.

For instance, a network of churches, synagogues, mosques, and temples in Seattle have joined the Rapid Response Network, a group of community members trained to respond to Immigration & Customs Enforcement raids and hate crimes when they take place. This network is a perfect example of how to keep our communities safe through solidarity, not militarized law enforcement.

As Jews, we are terrified by the recent shootings in San Diego and Pittsburgh. Anytime we are in Jewish spaces, we wonder if ours is the next under attack. We also recognize that with violence against our community there has also been an increase of violence against others: the shooting of the mosque in Christchurch, the burning of three Louisiana Black churches, the tearing apart of families at the U.S.-Mexico border. Our safety is tied up with the safety of all communities. We draw strength from the words of Hillel: “If I am not for myself, who is for me? If I am only for myself, what am I? And if not now, when?”

IfNotNow Seattle is a Jewish community organization working to fight anti-Semitism and white nationalism, and end American Jewish community’s support for the occupation.

Bess Hepner is a young Jew in Seattle. She works at Mary’s Place and organizes with IfNotNow Seattle. She is an avid eater, likes endless social interactions, and is a musician.

Michael Grant is an educator, restorative justice practitioner, and Jewish organizer in Seattle. He works with youth to tear down oppressive structures in their lives through music and community.

Risa Nagel is a young Jewish American who lives in Seattle, works at the Equity in Education Coalition, organizes with IfNotNow Seattle, and walked off her Birthright trip last summer to expose the institution’s support of Israel’s state-sanctioned violence against Palestinians.