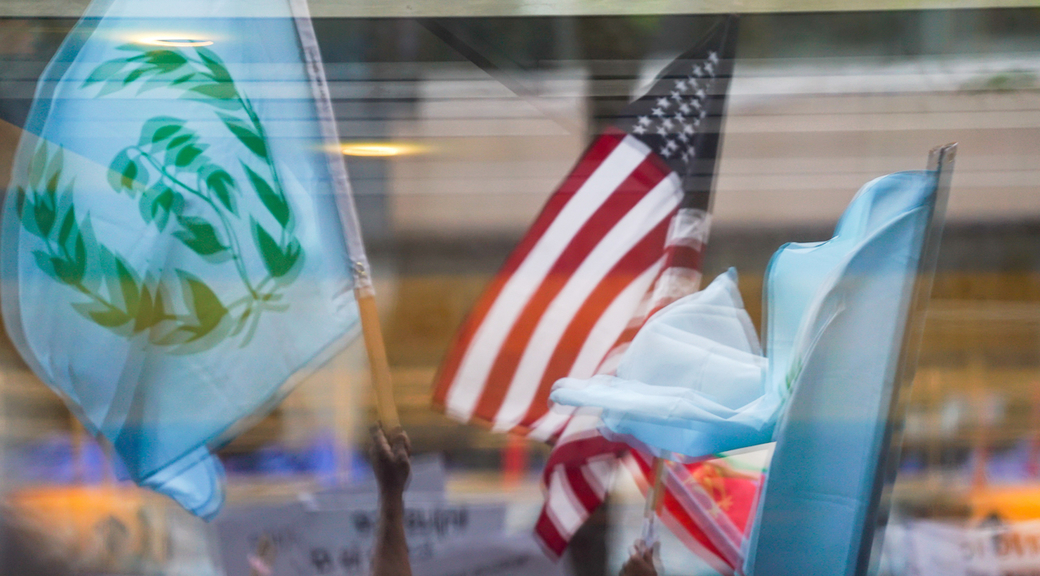 story and photos by Susan Fried

Members of Seattle’s Eritrean Community marched from their community center in the Central District to the Federal Building in downtown Seattle on May 24, Eritrean Independence Day, to deliver a letter to Sen. Patty Murray highlighting the plight of Eritrean refugees and the people of Eritrea and ask her help in convincing the U.S. government to hold the Eritrean Totalitarian Government accountable for its human rights abuses.

Eritrea gained its independence on May 24, 1991, but despite creating a constitution that guaranteed the people of Eritrea a Democratic form of government the country has been presided over by a dictator ever since it became independent. This has caused many people to leave the country, making Eritreans one of the largest groups of refugees in the world.

As the dozens of Eritrean and American flags blew unpredictably in the wind, several members of the Eritrean community spoke about the hardships endured by the people of Eritrea and those trying to escape the oppression there. Belina Seare said that it was so encouraging to see so many people out to support the Eritrean cause and that for a long time, “we were in our own silos, speaking to the wind about what was happening back home, if anything this is just a beautiful moment to to reflect on that this is only just the beginning of our struggle and resistance against years and years of tyranny and dictatorship.”

City Council member Kshama Sawant spoke at the event expressing solidarity with Seattle’s Eritrean Community and the people of Eritrea, and support for the United States government to champion the fundamental human rights of the Eritrean people and demand that the Eritrean government abide by the rule of law and implement the ratified constitution of 1997 among other demands.

The letter the members of Eritreans in Seattle for Justice delivered to Murray’s office listed the numerous violations of human rights committed against the Eritrean people, including extrajudicial executions and arbitrary killings, including the eviction from their traditional lands and mass killings of the pastoralist Kunama ethnic minority of the country, forced indefinite conscription, religious oppression and no freedom of association, expression and belief.  The letter requests that the U.S. Government demand Justice and Accountability from the the government of President Isaias Afwerki.

Featured Image: The Eritrean and U.S. flags blowing in the wind are reflected in the window of the Federal Building in downtown Seattle during a rally by Seattle’s Eritrean community on May 24, Eritrean Independence Day. (Photo: Susan Fried)