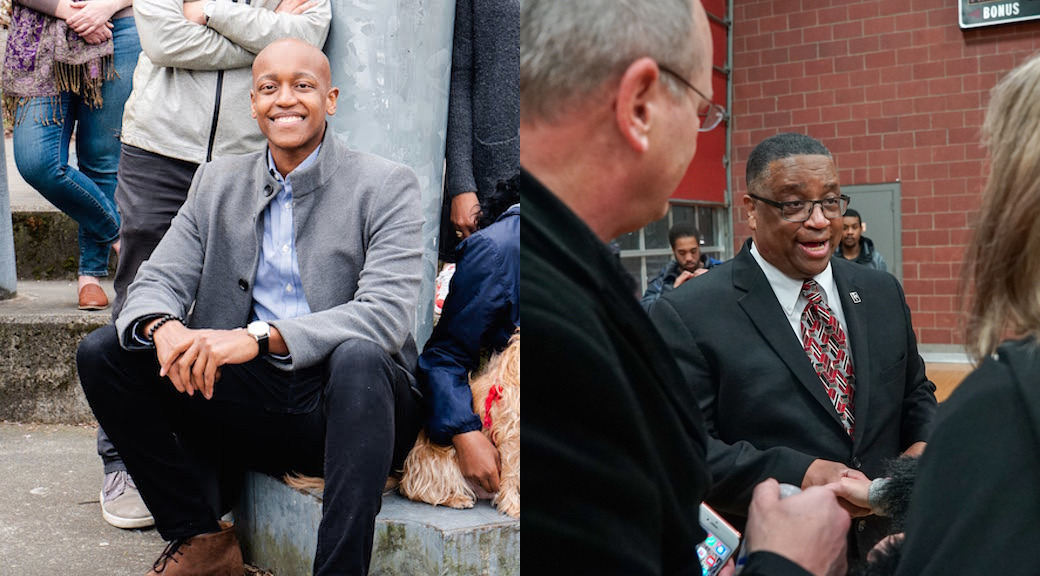 On stark display Thursday night at Dimmitt Middle School in Skyway was the generational, and in turn experiential, divide between a septuagenarian incumbent who has been in office nearly a quarter century and his insurgent challenger for the District 2 seat on the Metropolitan King County Council.

Longtime Councilmember and former council chair Larry Gossett hasn’t faced a competitor on the ballot in 14 years. He touted the council’s achievements in his tenure, including lowering youth detention rates. Girmay Zahilay is a Seattle attorney who grew up in south Seattle after immigrating from Sudan with his parents when he was four-years-old. He seeks dramatic changes in the future that could be fostered by the council, including a public bank proposal.

“I have 25 years, almost, of sponsoring legislation that almost nobody has said could get passed and I’ve gotten it passed because I’ve had the ability to successfully mobilize people to support the issues,” said Gossett, a pillar of Seattle’s civil-rights movement who was instrumental in the years-long push to have the county use Martin Luther King Jr. as its logo.

The Metropolitan King County Council represents the county’s 39 cities and more than 2.2 million residents. It is responsible for public health and human services, Metro Transit bus service, wastewater treatment and solid waste management, as well as the criminal justice system, which includes prosecutors and public defenders, District and Superior Courts and both adult jails and juvenile detention.

Gossett took a while to make a decision to run for reelection due to health concerns, including a stroke in 2013, before jumping into the race in the spring.

Zahilay, never before elected to public office, has proven to be a formidable challenger, receiving the endorsements from the King County Democrats as well as the 11th, 37th, 43rd, and 46th District Democrats and outraising Gossett by more than $33,000 so far, according to Public Disclosure Commission filings. He also claimed in the debate that he is the only candidate in the race not accepting money for corporate political action committees.

Gossett, however, has received high-profile endorsements from Congresswoman Pramila Jayapal and state Attorney General Bob Ferguson as well as the 46th District Democrats while raising nearly $80,000 for the non-partisan position.

On questions of housing at the Thursday debate, Gossett repeatedly mentioned a series of measures he plans to release at the end of this month that includes eviction reform and investments in renter assistance. Zahilay called for a shallow rent subsidy program in which families who could face housing instability are provided with small amounts of money over a defined period, creating a housing safety net, and investing in community land trusts to increase home ownership.

“We all know that the best way to solve homelessness is to stop it from happening in the first place,” said Zahilay, who grew up in social housing in Rainier Vista and Holly Park.

The candidates tackled the anxiety around gentrification in Skyway that has already affected longtime residents in other neighborhoods in the district.

“That economic tsunami is coming for Skyway next so the question is, how do we build density so that we can put in affordable housing units and house people without displacing the communities that have already been there,” Zahilay said, adding that he would push for stringent affordability requirements on developers.

Zahilay also called for inclusionary zoning, a housing policy that requires or incentivizes housing developers to include affordable units in newly constructed buildings. Gossett said inclusionary housing would be included in his upcoming anti-displacement package that he said “will be very effective here in Skyway.”

“We can do it with the support of the community; we’ve shown that before and we’ll do it again with this new legislation that I’m gunning for,” added Gossett, chair of the council’s Law and Justice Committee.

A hot topic in the community-created questions was the future of children in south Seattle.

“Councilmember Gossett has been an innovative politician that has always put our youth first,” Gossett said, noting that one of the reasons he wants to continue serving in his mid-70s is because of the council’s progress on funding beneficial programs for low-income youth.

Zahilay started a non-profit in 2015 while living in Harlem called Rising Leaders, which partners with local middle schools to provide underserved students with mentors and life skills training, such as career development, public speaking, and know-your-rights workshops. In the debate, he drew on this experience and his childhood being raised by immigrant parents that didn’t attend high school or college.

“I know the social pressures that youth can face in our region when they don’t have the support that they need,” Zahilay said. “If we invest in our youth, they will prosper.”

He stressed diversionary programs and community-based solutions several times during the debate. He criticized the council for hypocrisy for its goal of zero youth detention while it builds a new youth detention center. Zahilay also criticized the council for not giving enough attention to areas such as Skyway, despite taking a racial equity lens.

Gossett acknowledged that he doesn’t think local government have made adequate investments in neighborhoods like Skyway.

Zahilay voiced his support for building a public county bank that could circumvent the state’s regressive tax system and raise revenues instead of paying fees to big banks. A public bank could also provide low-interest loans to small businesses.

Gossett and Zahilay are on the ballots mailed out this week for the August 6 primary and are expected to advance to the November general election where they would compete for the four-year term.