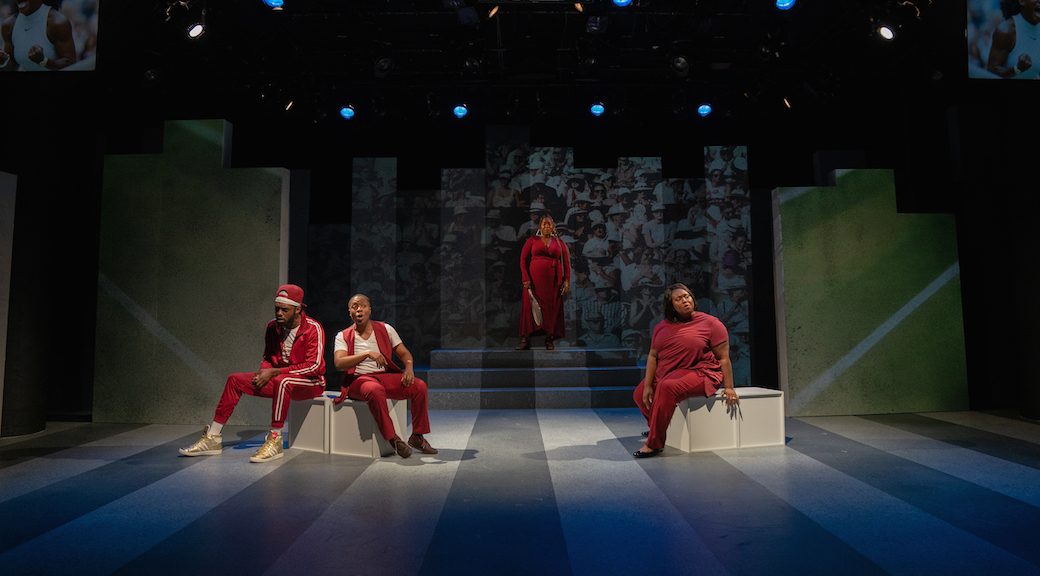 You can find books that talk about the serenity — yes, there were tribal battles — in much of Africa prior to the arrival of Europeans. However, African Americans — no such beings until Africans had been in the “new world” long enough to give birth, procreate — had no such beginning. What peace and tranquility some had was shattered by removal from all they knew to what eventually became the United States of America. And while some African Americans have had some peace and tranquility at some point, somewhere, many have lived lives that know nothing of either.

It seems Jamaican poet/playwright/essayist Claudia Rankine did her best to catalog unfairness at its least to horror at its worst in her poem Citizen: An American Lyric, adapted for the stage by Stephen Sachs. The multi-media play covers a short span of American history but a long history of racism, influencing people who are racists and people who must live with this racist behavior. It lists injustices suffered by many African Americans.

The more one knows of this period, the easier it is to follow Rankine’s “lyric,” although her 159-page of prose interspersed with photos does not follow the literary definition of the term, formal poem written by a person expressing emotions, feelings. Perhaps her catalog is peculiarly American and needs not follow such a definition. Yet another black writer reveals what constitutes life for so many African Americans. Rankine’s subject is the horror of being black in America. She covers a multitude of events, often reminding me of the amount of time it took to read the footnote-laden The Wasteland by T. S. Eliot! Six actors, two white and four black, are the citizens: Shermona Mitchell, Allyson Lee Brown, Naa Akua, Nicholas Japaul Bernard, Rebecca Cork, Richard Sean Glen perform the short play well.

The lyric is divided into seven parts; the stanza does not work here. Often the play moves seamlessly from one part to another. Microaggressions are throughout the work but accented in some sections more than other sections. Merriam-Webster defines “microaggression” as “a comment or action that subtly and often unconsciously or unintentionally expresses a prejudiced attitude toward a member of a marginalized group (such as a racial minority).”

“The task of pointing out the microaggression which the aggressor is sometimes unaware rests with the marginalized person,” says the dictionary. However, the person on whom the microaggression is dumped does not always point it out. On the first page of the poem, for instance, the speaker recounts a white classmate telling her she has “features more like a white person.” The narrator can only speculate the reason for the comment; she never explains that she is offended but explains to the reader: “Certain moments send adrenaline to the heart, dry out the tongue, and clog the lungs. Like thunder they drown you in sound, no, like lightning they strike you across the larynx. Cough. After it happened, I was at a loss for words.” The victim of the microaggression may be confused about the why of the offense but never the meaning of a comment because the meanings may be legion and each offensive in a particular way.

In the next section Rankine introduces Hennessy Youngman, a Jayson Musson character who advises blacks to monetize their anger and Serena Williams who eventually showed her anger. Of course, a thinking citizen can attempt to explain to Hennessy that citizens who were not the least bit angry when they encountered a fellow citizen or citizen policeman, left the scene dead. (Musson videos abound on You-Tube.) Two persons who have lots of money and have had to practice not showing their anger are the tennis champion Williams sisters. Serena Williams —and Venus — are the incarnation of Zora Neale Hurston’s, “I feel most colored when I am thrown against a sharp white background.” Serena’s U.S. Open loss in 2004 and umpire calls, or miscalls, remind her of the racism.

Rankine surmises, “Perhaps this is how racism feels no matter the context — randomly the rules everyone else gets to play by no longer apply” to Serena whose reacting to this realization means being labeled “insane.” And the calls, miscalls, bring to the fore other times umpires have not seen what Serena saw or understood what she has been through.

Memory won’t let us forget. The indignities cause moans and groans, aches that carry over to the next section where the actors spout a sentence or two at a time. The frustration is expressed via the speaker questioning herself: Who is she? The play moves to information that most playgoers recognize. There’s a video of persons in the water in New Orleans after Katrina hit. Too many names of persons killed by police or other citizens simultaneously flash on both sides of the stage at a pace too fast for the audience to read each name. How many names do you recognize? Do you remember the details?

The final part of the play depicts an action that happens often on public transportation — finding a seat on the subway. Do you sit next to a person on the subway or not sit because of that person’s color? In a conversation between director Jay O’Leary and Head of Directing Program at the University of Washington School of Drama and Artistic Director for The Hansberry Project Valerie Curtis Newton following the play, several people admitted they too had hesitated or did not take a vacant seat because of who sat next to that seat. Of course, one’s choice is not always predicated on race, but sometimes it is. This section is called “Making Room.”

It’s clear that Sound Theatre is working hard to make room for more people. The company’s mission statement states that it “empowers artists to give voice to the dignity and diversity of the human experience — moving audiences toward a more just and compassionate world.” This is possible, but not without conversation.

Citizen: An American Lyric shows at Center Theatre at the Seattle Center Armory, 305 Harrison Street, through July 28, with performances Thursday, Friday, Saturday and Sunday. Tickets range are sold on a sliding scale from $5 to $75.