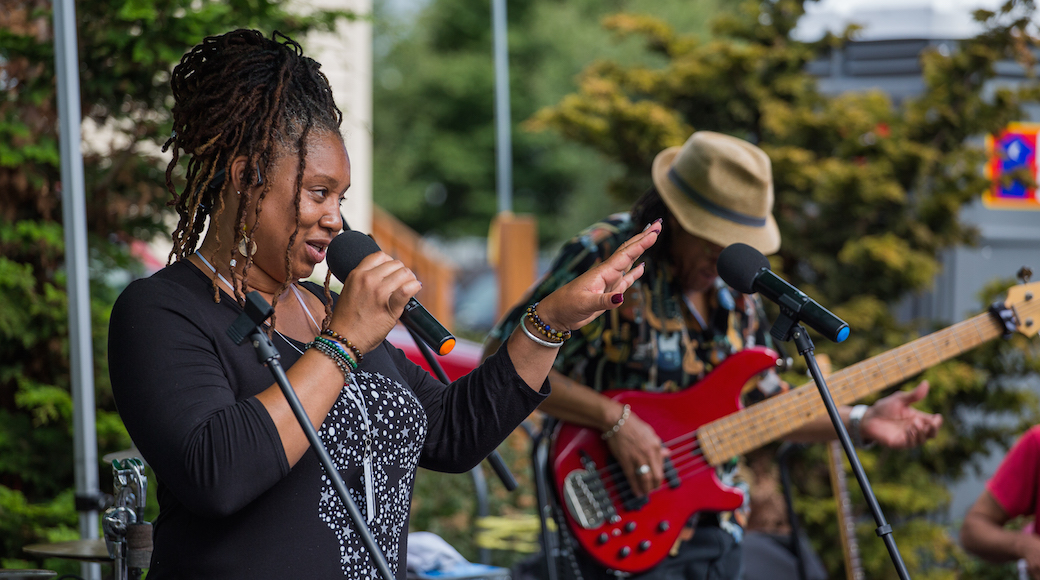 Music from two different block parties wound its way down the block and into the ears of Columbia City’s and Hillman City’s pedestrians on the late afternoon of July 27. The parties, held at Big Chickie and City Teriyaki, were part of the first annual South End Heritage Festival.

The event was meant to a fusion of a folk festival and the Rainier Valley Heritage festival, said organizer Ben Hunter. He and fellow organizer Gus Marshall wanted to showcase the South End’s musical talent, and give South End residents a rest from the ever-present shadow of gentrification and displacement.

Throughout the day, a variety of musical acts graced not only the block party stages, but the stages of local venues, as well. On stage that day were Sistas Rock the Arts, the Marshall Family Band, Banda Vagas, The Pazific, and more. Local vendors also sold their wares, repping another aspect of South End talent, and children played games set up to occupy them, while their guardians took a break to listen to the music.

In between listening to the music, Jimmy Kim tried in vain to teach his son, Rhys, how to play cornhole.

“No, throw it over there,” Kim said, pointing to the board opposite the small boy. After a moment’s pause, Rhys looked at him, and threw the beanbag into the hole over which he was standing. Kim laughed and shrugged, while Rhys’ sister, Noa, looked askance at her brother over her shoulder.

Towards the evening hours, the festival, which ran from 2 p.m. on Saturday to 12 a.m. on Sunday, shifted indoors to the Hillman City Collaboratory, Rumba Notes, Northwest Peaks, and the Royal Esquire Club. Groups like the Nu Trio, Swingset, and High Pulp graced the stages throughout the night, bringing both lively rhythm and smooth, jazzy twilight notes.