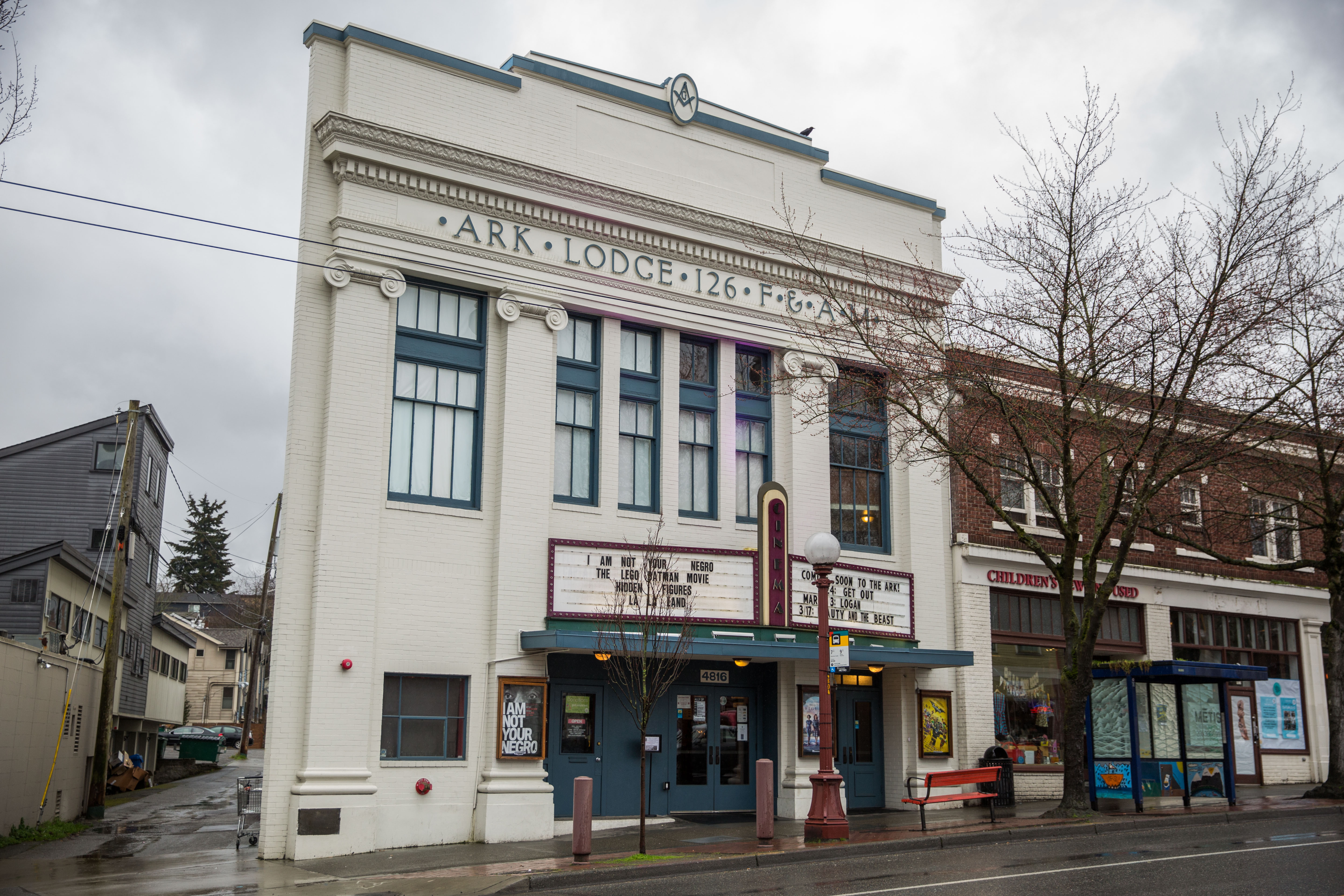 When it’s warm and sunny, Seattle-ites tend to want to spend their days outside doing everything they generally don’t do when it rains. They picnic on the lush grass in local parks; go to outdoor festivals and performances; take long hikes; go swimming — basically, everything except sit in a dark, cool movie theatre.

That’s part of the reason the Ark Lodge Cinemas in Columbia City has run into trouble. Owner David McRae said the theatre has been running in the red since it opened its doors in 2012, but this summer has seen an unusually bad slump: the four-screen cinema has a revenue deficit of a quarter of a million dollars.

The Ark’s financial woes have to do with a drop in attendance, fueled by the cinema taking a gamble on movies that ended up getting panned by critics, such as Where’d You Go, Bernadette. It’s also because, for the last seven years of the Ark’s 15-year lease, McRae and his retired, 87-year-old mother have financed almost the entire operation.

“We have never applied for any kind of grant or GoFundMe for the theatre. We have tried to do as much funding of it ourselves, which I think any rational person would tell you is the last thing in the world you should do is invest in your own business,” McRae said with a bleak chuckle.

As for the drop in attendance? That alone isn’t unusual, McRae said, especially in the mid-to-late summertime. All the early summer blockbusters, like this year’s Avengers: Endgame, have already left theatres, and with the exception of a few films McRae calls “sleeper hits” — like this year’s The Last Black Man in San Francisco, and The Farewell — the films coming out tend to be less exciting. Moreover, people are often out of town on holiday.

But critics also hated most of the movies the Ark has chosen to run throughout the summer.

It’s not as though McRae did this on purpose: the way theatres work, McRae explained, is that they choose to run movies before critics review them. They put down what’s called a guarantee on the film, which is a monetary commitment that allows the theatre to show the film. The smaller the theatre, the bigger the guarantee, McRae said. For the Ark, that translates into anywhere between $3,500-$7,000 per film. They are required to run the film for at least two weeks.

The only way for a theatre to make back the money they’ve put down on films is through ticket and concession sales. However, in addition to the guarantee, studios take about 60 percent of ticket sales — only 40 percent goes back to the theatre. This makes sense, McRae said, because studios want to make back as much money on their investment as possible, and do it as quickly as possible.

But because the films the Ark has chosen haven’t been well-received, and the cinema doesn’t have the luxury of shunting them to smaller screening rooms, like big chain cinemas do, it’s losing money.

McRae said he’s currently being forced to choose between paying the rent, fixing up the marquee – the face of the building, which McRae said people have complained about – and fixing one of the screening room’s projectors’ light engines. Each one of those items costs upward of $10,000, though the latter issue is particularly damaging.

“Losing a light engine is like losing the engine in your car. And the light engine costs $15,000. Do we pay the rent on time? Do we fix the marquee? Or do I get this projector fixed, so I am not down to three screens?” McRae wondered aloud. “I can’t make any money, if I’m not playing movies on all four screens. So I have to go to the landlord and say, ‘I can’t pay rent, because the projector’s broke.’”

McRae said he’s blessed with an understanding landlord, but that understanding still doesn’t fix the problems. Yet despite said problems, McRae is hesitant to put up a Go Fund Me, or a call for donations or assistance, because of the space’s history.

The space used to be a three-screen theatre called the Columbia City Cinema, run by a man named Paul Doyle. Doyle also ran the Grand Illusion Cinema and the Grand Tacoma Theatre. But in December 2010, Doyle was charged with violating the Securities Act of Washington, following a bungled attempt to save the struggling theatre and put in the necessary safety basics, like a sprinkler system, to be compliant with the city’s safety code.

As it turned out, Doyle was in violation of the law the entire time the theatre was open: the Columbia City Cinema had never been properly permitted, and, because of this, had gone uninspected for its entire existence.

Doyle was forced to close the theatre in May 2011; and, thus, McRae said, he fears Columbia City residents don’t carry the best impressions of struggling theatres and their owners, especially when they put out calls for help.

“I’ve even seen this on social media, where I’ve gone and posted, and I will see reactions to things saying, ‘Oh, they are yelling fire in their own theatre again,’” McRae said.

Losing the Ark would be a blow to the community, McRae said. It’s part of the “never have to leave” community ecosystem, in which community residents don’t have to leave their neighborhoods for, well, anything. Beyond the fact that, if the Ark closes, they will be forced to go Downtown to see first-run movies, residents also leave the theatre and patronize other businesses in the area: they go to dinner at one of the many restaurants nearby, get ice cream from Molly Moon’s just next door, or grab a coffee at Empire Espresso.

Moreover, the theatre provides jobs for the area’s young people, which is why McRae has staunchly refused to serve alcohol. If he allows for alcohol, young people under the age of 21 would be prohibited from working there, which would mean some area teens would be out of a summer job.

But losing the Ark would also have emotional consequences. It’s where so many of the area’s kids have grown up, McRae said, munching on popcorn with their parents, as the old-school, pre-movie announcements flickered across the screen, before the main attraction glued them to their seats. Some of those kids are now his employees.

“I recognize some of the people that have actually shown up to work, and said, ‘Gee, you used to come here when you were 12 years old,’” McRae said. “Now, they are getting their first job. I have literally seen people grow up in the theatre, and it’s been awesome.”

Columbia City residents can help close the $250,000 gap for the GoFundMe-averse theatre – or at least make the gap more manageable – by buying gift cards online, and pack the theatre’s seats this autumn and winter, when big box office releases are set to come out, like the Downtown Abbey movie, A Beautiful Day in the Neighborhood, and the ninth Star Wars installment.

But what’s the biggest way the community can help? Show up, McRae said.

“We’ve always been in the red, but we’ve always had kind of enough to keep things at bay, and, at this point, we don’t know – we are almost at the point where it’s just not going to sustain itself without people showing up. That would be the big turnaround,” McRae said.