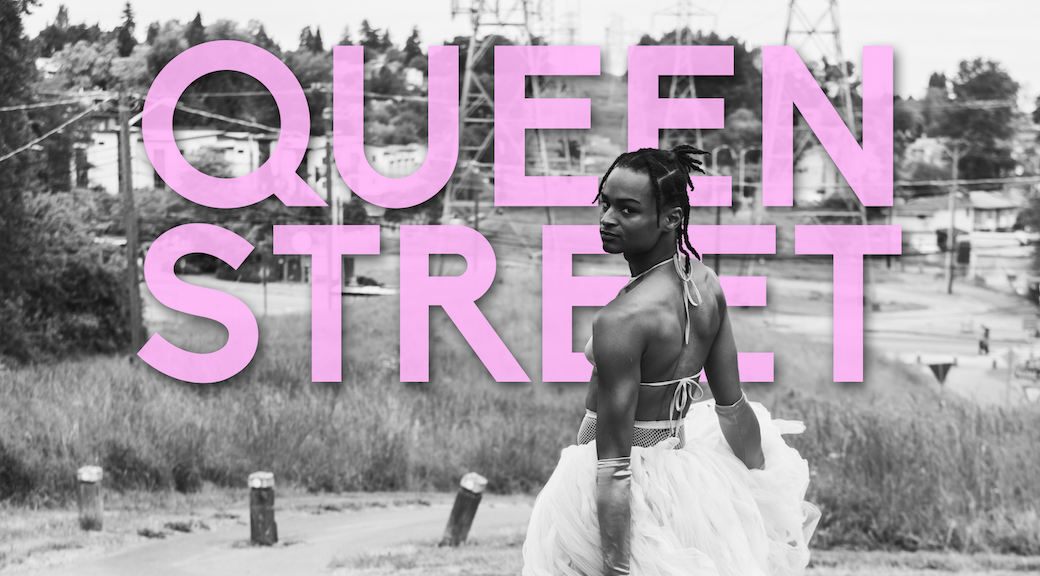 Queen Street is an original work by Randy Ford that uses dance to highlight intersectionality through the lens of queer, trans, nonbinary, and gender nonconfirming people of color. The show plays at the Langston Hughes Performing Arts Center Sept. 20 and 21. The event is community- and grant-funded. Visit Brown Paper Tickets to purchase seats.

Emerald Contributor Leija Farr spoke with Ford about preparation, dance as protest, and keeping the arts grounded in community.

Leija Farr: How did you come up with the name Queen Street for your event?

Randy Ford: The name Queen Street came from a solo I did at the King Street Station for a program called Out of Sight in 2017. I thought to myself, “Fuck King Street this is QUEEN STREET” and then I ran with it. I think of my identities — Black, Nonbinary, Trans, Femme, Artist, Educator, Choreographer, Goddess, Orisha, etc — as roads that make up my being. Some of these roads are under construction. Some have dead ends. Some roads I never go down, but they all are important and have shaped who I am today. This work is about how all of us people are comprised of road maps that intersect and overlap and we are all navigating our own journeys. There is also something to be said about home. Seattle being the fastest growing city in the nation with the most cranes up than any city, I recognize that not only are we evolving but our surroundings also are going through a period of evolution where communities are being displaced. Intersectionality is the focus of this show and you cannot escape it.

LF: How do you practice presence during your performances?

RF: I practice presence by taking my warm ups seriously. When I can, I like to warm up for at least 30 minutes to an hour before performing. When I warm up I’m checking in with my body seeing where there’s tension, where I can find release. I’m usually going through the performance from top to bottom in my head. I’m not a perfectionist. My work lives and breathes and is different every time. I walk through my performances just to make sure that I am centered and have a layout of what I want the audience to take away.

LF: What did you sacrifice for this event to come about?

RF: SLEEP, TIME and MY PERSONAL FINANCES. There’s a lot that comes with co-producing a show that a lot of people don’t think about. Like where is the money coming from? Who is going to be putting out posters? Which press are gonna be invited to see the show? Is this show accessible to the communities I’m trying to reach out to? Can I provide food to the dancers at these rehearsals that are during meal hours? All of these and more are things that I have lost sleep, time, and broke the bank in order to make happen.

LF: How did you feel receiving funding from the community to contribute in making Queen Street happen?

RF: This project is supported by two grants. The Arts Projects grant from Seattle Office of Arts & Culture and the City Artist grant from 4Culture. With those two grants I was able to raise a huge chunk of my goal of $20,000 for this run. I then with the help of Au Collective being a fiscal sponsor started a crowd fund on GoFundMe to raise the rest of the funds. Seeing the community sharing and donating to our campaign has been so overwhelming with love. Raising money is always horrifying, but I’m elated when I see my peers, students, and parents of students contributing to Queen Street. Queer and Trans artists of color are extremely underpaid and undervalued in this city. I didn’t want to contribute to that culture. I want to continue a culture where the local artists are valued at the same caliber as the international artists we fly in all the time. These artists — Kat Young (Photography), Nic Masangkay (Music Production), Dominique Thomas (Lighting Technician), Dominique Stephens (Production Manager), Marcos Everstijn (Set Design), Chip Sherman, Saira Barbaric, and Keelan Johnson (Collaborating Performers) — are well known Seattle talent within their own spheres and networks. KILLING THE GAME! And I want to make sure they are valued for what they bring to this production.

LF: Is there an alter ego you bring to the stage? If so, would you feel comfortable detailing it?

RF: There most definitely is an alter ego that I channel and I’ve given her a name Aísha. It means “living, prosperous” in Arabic and Swahili. I’ve always loved the name and when I found out the meaning I felt super connected to it. I feel that I give life when I perform by showing people that I am living fully within myself. I’ve been Randy Ford all of my professional career and I love my name but I do feel a need to differentiate Randy Ford and Randy the human. Aísha is a Goddess Orisha. She gives the people what they need and inspires everyone around her with her grace and heart. She gives it all to you. The passion, sensuality, the vigor, the strength, the drive, all of it. She wants your ALL of your compliments and your money so that she can continue her work in the community. What also inspired this name is my involvement in the Seattle Tacoma Kiki Ballroom scene. I’m a daughter in the Royal House of Noir where we center Black Trans Womxn and Black Excellence here in Seattle.

LF: Besides finances, what do you need from the community to help in amplifying your artistic expression?

RF: I would love if the community kept the same energy they do for rainbow crosswalks, traffic safety, police brutality, global warming, pink pussy marches, etc, and put that same energy into the liberation and inclusion of Black and Brown Trans folx specifically Black Trans Womxn. There’s damn near silence when a Black Trans woman is reported murdered or assaulted. It’s definitely something I am looking at when it comes to “allyship.” If you’re only interacting with Trans womxn when they are performing or seemingly doing well you need to check in with yourself and see why that is. We are not here as your playthings, or your dolls, we’re humans who are extremely disenfranchised in society. Yes we are beautiful and slay all day but we aren’t just that. There is a lot more that goes into us liberating just ourselves. I feel that the community only looks to us when we’re up and glorified but not to the same degree when we’re down.

LF: Why is this event important to you?

RF: This project is my baby. It’s a moment where folx will get to see what exactly is Randy Ford passionate about. I’ve been featured in so many works over the years and this show is where Randy is speaking for Randy. I not only co-produced and choreographed but I also wrote original music that will also be featured in this show. I’ve reignited talents that I haven’t tapped into in a while. I’m really stepping into who I am and I have more confidence than ever about this work.

LF: Do you see dance as a form of rebellion/protest?

RF: Of course!! Less than 50 years ago, Black folx were not allowed to perform in proscenium stages. As a Black, nonbinary, Transfemme artist I am constantly rebelling against cisnormativity. A free moving and liberated Black body is rebellion and protest.

LF: What was the preparation like for this event? At what point did you know it was complete?

RF: I’m not sure if this work will ever have a finite finish. My work changes and grow as I change and grow. It took me three years to get to this point. Lots of nos. Lots of grants that didn’t fund this work. Lots of friends I couldn’t hang out with because I had to crack down on deadlines. But I was always knew this work had to be done. It not only had to be done for the community and culture but I had to do this for myself. When I participated in CD Forum’s Showing Out: Contemporary Black Choreographers last year I had about 30 minutes of this show done and one other performer on board (Chip). I guess I knew it was time to “finish” this once I realized how much of it was done already.