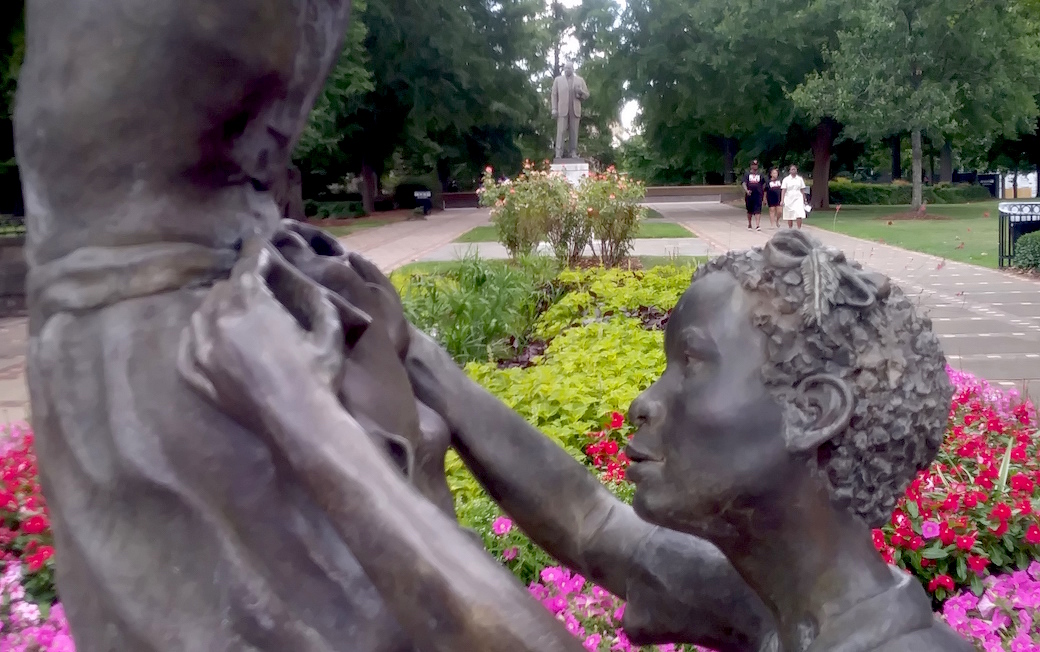 Over my time traveling through the South I’ve been blessed with a plethora of experience. I have been able to see different realities and lives that where both extremely different and astonishingly similar. This has given me time to reflect on how we as activists and as a society view reality. Who is made invisible? Unlike the identity politics of today, my travels have deepened my understanding of our oppression and our struggle for liberation.

I want to take the time to address something of extreme importance: the divide between the so-called “leadership” of movements and those on the Frontlines. I’m speaking of the warriors or the children whose existence was placed on the Frontlines from conception.

Birmingham, for example. We have Martin Luther King Jr., a charismatic leader who was a product of collective labor, stashed behind waves of Black bodies in everyday life, though being seen as someone at the front due to demonstrations. He was actually very protected, far from the Frontlines. In contrast we have Cynthia Wesley, Carole Robertson, and Addie Mae Collins, who were all 14 years old, and 11-year-old Denise McNair. Their existence was thrown on the Frontlines by those opposed to our people. Child soldiers, of the so called “children crusade,” were put on the Frontlines by leadership. All this led to children taking the brunt of the punishment. Though in history it is written as a pit stop, instead of the sacrifice, bravery, and dedication I think it actually was. It was extremely instrumental to making headway for the civil rights movement. We don’t credit them for the pinnacle role they played, nor do we question or critique the leadership in the way they may need to be.

Those examples barely scratch the surface. It isn’t just Birmingham; it isn’t just in the past. Those children were Frontliners, who were either chosen and/or loved by the supposed leadership, part of their congregation. But what about those who are not, then and now?

Frontliners who are not chosen are often the most affected. Folks who are criminalized, the lumpenproletariat. Folks from the rez, the projects, low-income areas, and rough neighborhoods. Being on the Frontline is not a choice or a matter of circumstance but survival.

Often in those situations those who are on the Frontline are unsupported, shunned, and even condemned for the tactics deemed necessary. Only through the lens of history do they find their due love and appreciation. Often today’s people who show Frontliners gratitude for their past work will oppose the same militant energy of Frontliners today. Frontliners are energizing because for them to be compromising is to endorse their death. Frontliners have no choice except lie down or stand up.

Frontliners remind those who are trying to assimilate how much they are not doing for their people while simultaneously making it harder to assimilate for those who have the privilege. Modern opponents to Frontliners replicate history, following the same pattern that isolated Frontliners of the past. This is due to the polarizing nature of Frontline Militant action. Which often in its opposition to oppression creates a response from the oppressor of stripping the assimilationist of the crumbs they where granted in attempt to (often with success) turn the assimilationist violently against those on the Front. In this way it replicates history, this pattern being the same that isolated the Frontliners of the past.

Things need to change or we will find ourselves repeating the past failure stranded in an ocean of squelched resistance, many drowning while a few are on a raft of complacency towed by the ship of white imperial nationalism as the power structure throws smaller and smaller soggy scraps to sustain them. One of the first things we need to do is see the workers, not the leaders. Those whose labor is foundational towards our liberation and prosperity instead of the talking heads who steal the credit. Not only is it more honest but it also is foundational in love of our people, no matter whether you are talking black love, queer love, or lumpen love. Let our love and respect be as intersectional as our rhetoric.

With blessings and solidarity your comrade,