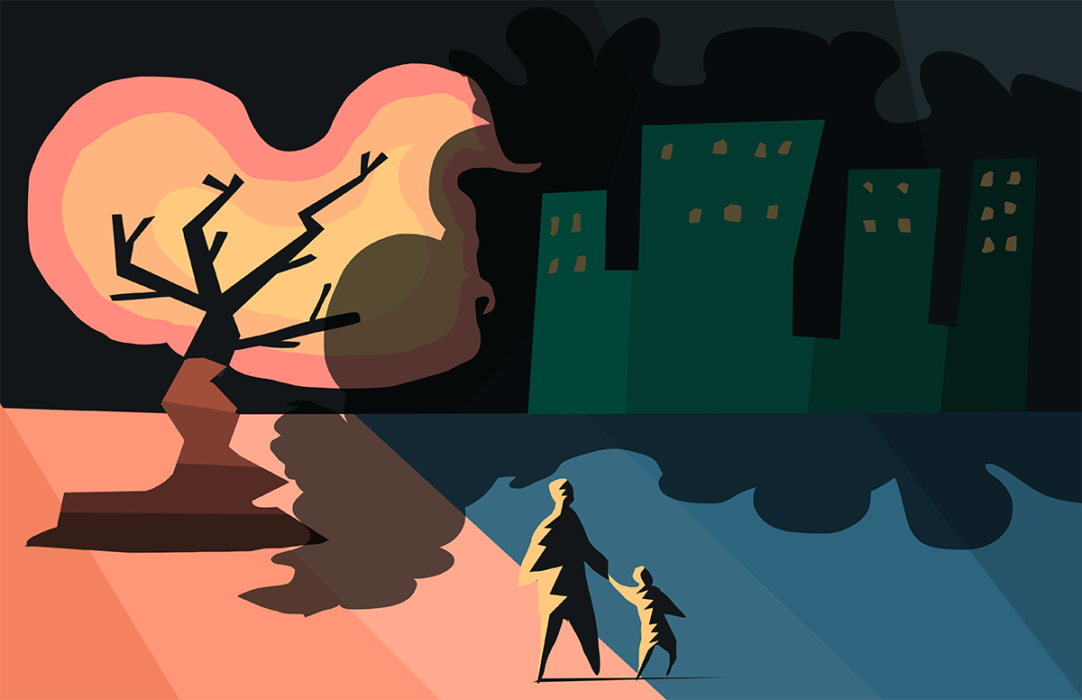 (This story originally appeared in Bitterroot, an online magazine about the politics, economy, culture, and environment of the West.)

After wildfires ripped through California this fall, the plumes of smoke that enveloped the state underscored how millions of people living in the West are being exposed to air pollution. Climate change is likely to make fire and smoke problems worse. What that means for our health, though, is just starting to be understood by researchers.

Wildfire smoke can cause a jump in emergency-room visits and hospitalizations, and researchers believe it is likely contributing to a higher mortality rate. But it’s difficult to tease that effect out of the data because those most vulnerable to smoke pollution also have underlying health conditions like asthma or heart disease. Overall, little is known about the long-term effects of breathing smoke-filled air, but we do know one thing: Here in the West, we’re breathing more of it.

Despite a national trend toward cleaner air over the last five decades thanks to the federal Clean Air Act — which regulates emissions from power plants, industrial sources, and vehicles — air in much of the West is getting worse. And, according to a paper published in June by University of Washington Bothell researchers Dan Jaffe and James Laing, wildfires are the culprit.

Fine particulate matter, or PM 2.5, is about one-thirtieth the diameter of a human hair. When inhaled, it can travel deep into the respiratory system, raising the risk of heart disease, lung disease, and diabetes. Jaffe’s trend analysis of PM 2.5 measurements between 2006 and 2017 showed a decrease in PM 2.5 levels during the worst pollution days for much of the country, but an increase in the West. While air quality in the West has improved overall on most days, the gains are being wiped out by those days when PM 2.5 concentrations are extreme due to wildfires, Jaffe said.

Harvard University researchers say these smoke events will become much more common in Western cities. Between 2004 and 2009, 57 million Westerners experienced “smoke waves” — periods of two or more days with unhealthy levels of fine particulate pollution. Jump ahead to the 2046 to 2051 time frame, and researchers expect 82 million people will experience the multiday smokeouts.

And on those days, it’s hard to escape the bad air. On August 21, 2018, the day Seattle’s air had the highest PM 2.5 concentration ever recorded, Jaffe noticed that he could smell smoke indoors, too. He used a handheld sensor to measure pollutants in his university office and in his north Seattle home, and found the air in both was almost as unhealthy as the air outside.

He and Laing are calling on experts to identify the best strategies for reducing smoke exposure, “especially given that this problem is now exposing millions of people in the United States to unhealthy air.” In their June analysis, Laing and Jaffe found that about 30 million Westerners now live in areas that don’t meet federal PM 2.5 standards.

During California’s recent wildfires, people were urged to stay indoors. The California Air Resources Board (CARB) recommends using an indoor air cleaner during smoke events, or to run a home’s central air conditioning with the fresh-air intake closed and a high-efficiency filter in place.

That’s not an option for many homeowners in Seattle, where mild summers mean few homes have central air conditioning. So in 2019, after consecutive years with smoky air, the city of Seattle upgraded the air filtering equipment in five community centers and city buildings. More upgrades are expected.

Meanwhile, the South Coast Air Quality Management District, which monitors much of Southern California, doesn’t take an official position on the need to set up clean-air rooms during smoke waves. “But we recognize that this is an important area of discussion across agencies,” said spokesman Bradley Whitaker.

Seattle was lucky this year — its air remained smoke-free as a confluence of weather factors dampened the wildfire season. But there’s no way to count on that in future years, which makes planning difficult. Weather plays a big part not only in creating a bad fire season, but also in pushing smoke around the globe. Much of the smoke that settled in Seattle in August 2018, for example, came from fires in British Columbia.

“You just need the right weather pattern on any given year” to trigger a wildfire smoke event, said Erik Saganic, technical analysis manager for the regional Puget Sound Clean Air Agency. Another complicating factor? Air quality can change quickly, and vary significantly from one location to another. Scientists don’t yet have good tools to predict how bad it will be or where smoke will move, he said.

While scientists know bad air can trigger acute health issues, what’s less well-known is the long-term effects of exposure, said Annie Doubleday, a University of Washington graduate student researching the effects of PM 2.5. It’s a relatively new phenomenon that large parts of the population are being exposed frequently to wildfire smoke, she said.

And researching it is tricky. Smoke can have a range of chemical components depending on what’s burning. For example, smoke from a brush fire may have a different composition than smoke from an old-growth forest. And when fires erupt in the wildland-urban interface, near where people live, “you’re burning not only forests but also structures and homes,” said Doubleday. “The smoke is much more toxic.”

Washington’s Methow Valley experiences some of the worst air pollution in the Northwest during the winter, as weather inversions trap dirty air from wood-burning stoves close to the valley floor. More recently, it’s also had to contend with unhealthy air during wildfire season. The group Clean Air Methow is using a network of inexpensive wifi-enabled smoke sensors to measure the air quality in real time and give people a picture of what’s going on around them in hopes it will help people avoid the polluted air.

The citizen-science program uses more than 20 sensors that monitor PM 2.5 levels every 80 seconds. The data is displayed on an online map and an iPhone app, Methow Air, that shows air quality throughout the valley floor.

Doubleday said people living in fire-prone areas throughout the West need to think about how they’ll protect their lungs from fine particulates when the next fire hits.

“As with many natural hazards, you need to be prepared ahead of time, because this is going to keep happening in the West,” Doubleday said.

Katherine Long is a freelance journalist based in Seattle.