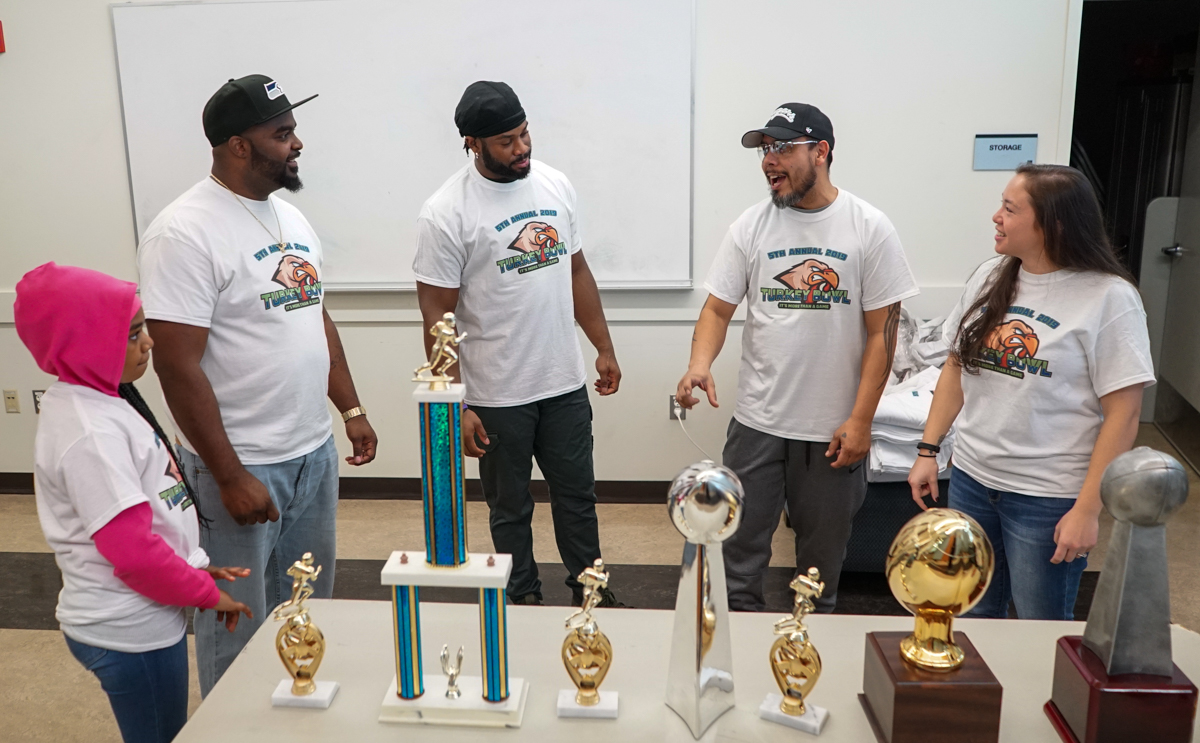 With four children, two jobs, oversight of three teen late night programs at just as many community centers, and a desire to be on his loving wife’s good side with perfect “date night” attendance, Cortez Charles knows it would’ve been impossible to pull off Rainier Beach’s fifth annual Turkey Bowl Week alone.

Thankfully for the lifelong South Seattleite, the week’s activities—which kick off Tuesday with deliveries of boxed turkey lunches to the city’s unhoused, continue Wednesday with a free community dinner held at the Rainier Beach Community Center, and culminate Thanksgiving morning with a flag football tournament at Rainier Beach High School—were truly a community effort.

“The vision of the Turkey Bowl week and what it means to the city has gotten so much bigger than one person. The entire community has gotten behind the message of creating a tradition of giving back to each other,” says Charles.

As he ticks off the names of numerous community volunteers and organizations who ensured the week’s success, the 36-year-old amasses a list longer than Stacy Dash’s life regrets.

The initial vision for Turkey Bowl Week came from Charles’s uncle, Charles Sampson, who organized annual Thanksgiving Day football games in West Monroe, LA, in the 1960s so that extended family and friends could recapture mythologized gridiron glory and claim bragging rights for the year.

He brought the tradition with him to Seattle in 1977 before it died out in 1995. But the community camaraderie and neighborhood fun witnessed by a young Cortez left an indelible impression.

Wishing to resuscitate the galvanizing tradition in his neighborhood of Rainier Beach, Charles hastily gathered together community members and friends and spent two weeks planning the first Turkey Bowl in 2015.

But growing up in the South End and seeing first-hand the lack of resources extended to the area kindled the need for it to be more than a game.

“Cortez always wanted to expand it past football. It’s about being thankful for what you have and also reflecting on people in your community who don’t have as much,” says Allie Steinberg.

Steinberg was a part of Turkey Bowl Week’s humble beginnings when a few volunteers organized a tournament that saw just two teams take the grassy field of Renton High School to play flag football in near freezing temperatures, followed by a small potluck dinner of a few dozen.

Four years later, the Week’s organizing committee and volunteer network, which put in 11 months of planning, has grown to more than a hundred, with most living in South Seattle, Skyway, Renton and the Central District.

For Charles, it’s a show of “community reliance,” a dependence on the people he grew up with and around for the collective uplift.

“You look at so many nonprofits and government agencies and you have people fighting over funding. This event is very simple. It’s an opportunity to experience real love and transmit that to each other by giving your time and energy,’ he says.

Most of that effort manifests in the two days prior to the football tournament, where community volunteers make sandwiches, turkey dinners, and care packages with blankets, hats, and gloves for those experiencing homelessness.

As Charles hoped, the role modeling of adults in the community has positively influenced many youth in the area, including Nirae Petty.

The 20-year-old first became involved with the Turkey Bowl Week in 2016 when she was the Student Body President at Rainier Beach High School. Looking for student volunteers, Charles reached out to her.

“He really treats youth like family, instead of us just being a statistic,” she says, who now works under Charles at Rainier Beach High School’s late night program.

Petty and her mother were beneficiaries of the turkeys given out during the week’s community dinner 3 years ago. The one she took home ended up being the centerpiece of the Thanksgiving dinner she prepared for her mother.

“I see a lot of passion and empathy toward the people who live in Rainier Beach. That’s what makes this event different,” she says, looking forward to this year’s community dinner when 60 families will go home with donated turkeys after feasting on a volunteer-prepared meal.

Turkey Bowl organizers are stretching their compassion to other areas of the city this year. Petty has helped organize the Week’s Day of Service on Tuesday, where volunteers will hand out 1,000 turkey sandwich lunches and care packages not only to those dealing with housing instability at Othello Village in South Seattle but also at the Downtown Emergency Center and shelters in Pioneer Square.

But the intra-city exchange doesn’t stop there. Organizers are also bringing residents from other parts of the city to South Seattle.

Thursday’s tournament will deliberately pair North and South Seattle high-school football players from Bishop Blanchet and Rainier Beach High on a team against their respective coaches.

“We wanted these kids from North Seattle to team up with Rainier Beach kids and be able to call each other brother. They’re so used to playing against each other,” says Leonard Hicks, the defensive coordinator for Bishop Blanchet High School football.

Hicks, who grew up in Rainier Beach and has volunteered with the Turkey Bowl since the event’s Seattle inception, partnered with Rainier Beach High School football coach Corey Sampson to organize the high schoolers under the name “Team Unity” for Thursday’s tournament.

“We really want to pave the way for the future when we hope to have Garfield teamed with Ballard, Franklin teamed with Roosevelt, and start putting aside our stereotypes and differences as a city and mingle together,” says Hicks.

It’s a small step toward unity in a city increasingly segregated along lines of race and class in its affluent and less affluent segments.

“From what’s going on at a national level politically, to the city hall races that just got done, there’s a lot of division that we need to work through. When you come out to the Turkey Bowl there ain’t no politics involved. It’s people in the city being in fellowship with each other,” says Charles of his open invite for anyone in the city who wants to volunteer for the week’s activities or play in Thursday’s game.

His ultimate goal is for Turkey Bowl week to inspire offshoots in every major city in the country. He is currently talking with community leaders in other areas to make that a reality.

Admitting that some might view it as fantastical, he envisions Thanksgiving mornings where regardless of class, race, background, or gender, every community has a fidelity to peace, love, compassion, and bridge building.

After five years, his vision is inching closer to reality in South Seattle.

Event schedules and more information on how to volunteer for The Day of Service or play in Thursday’s tournament can be found here.