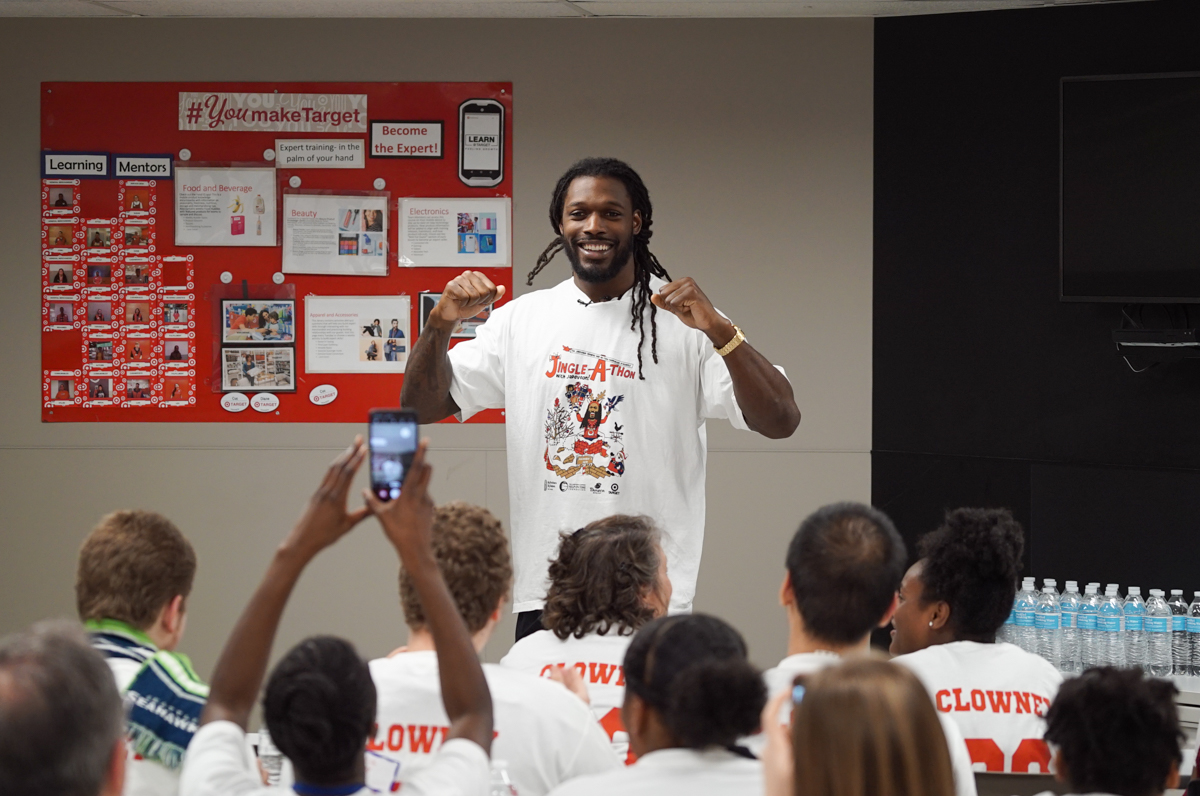 Thirteen-year-old Kahmoni and her Big Sister Dionne were the first to arrive at the Target in Tukwila’s Southcenter Plaza for what they thought was just going to be an opportunity to meet and have dinner with Seahawk defensive tackle Jadeveon Clowney.

Kahmoni could hardly contain her enthusiasm, saying how much her father loved the team and how much he wasn’t going to believe she had gotten to meet Jadeveon in person. The young teenager had even brought Clowney a small present and gave the Seahawks player a chocolate bar when they met.

When Mr. Clowney arrived in Seattle, his organization joined with Big Brothers Big Sisters to arrange a “Jingle-A-Thon with Jadeveon.” His foundation had done similar events in Houston when he played for the Texans, and he wanted to do something similar for Seattle kids affected by incarceration.

Mr. Clowney knows first-hand how difficult it is to grow up in a family with an incarcerated parent. He and his sister were raised by their mother.

“My Dad was not there. He was in jail for 11 years. It was rough. My Mom worked extremely hard when we were growing up. She did everything I could ever ask for.”

He said he told his mom that one day he was going to make it so she wouldn’t have to work so hard, and he said that he stayed focused on football and so as soon as he signed his first contract with the NFL, his mom could retire. And she did. He added that now anytime he can give back to children in need and particularly kids with incarcerated family members, he does the best he can to help.

For the last five years, he has been doing the “Jingle-A-Thon with Jadeveon” and seems to get as much pleasure out of it as the kids do.

Kahmoni and the other children enjoyed a light dinner from Panera. Then, each received a backpack filled with school supplies, some Seahawk mementos, and a $200 gift certificate for Target, which came with an opportunity to shop with their mentors and Jadeveon. The “littles” and their “bigs” spread out throughout the Target store, with the kids loading their carts with presents for themselves and their families.

Kahmoni used a little over half of her certificate to buy gifts for her family and saved the rest for another shopping trip in the future.

The kids and their mentors were all smiles as they paid for their purchases and exited Target, having had a very memorable and fun holiday experience.

Featured image Seattle Seahawk defensive tackle Jadeveon Clowney explains to a group kids and their mentors from Big Brothers and Big Sisters of Puget Sound that they will each be given $200 Target gift certificate and a chance to go shopping during “Jingle-A-Thon with Jadeveon” (Photo: Susan Fried)