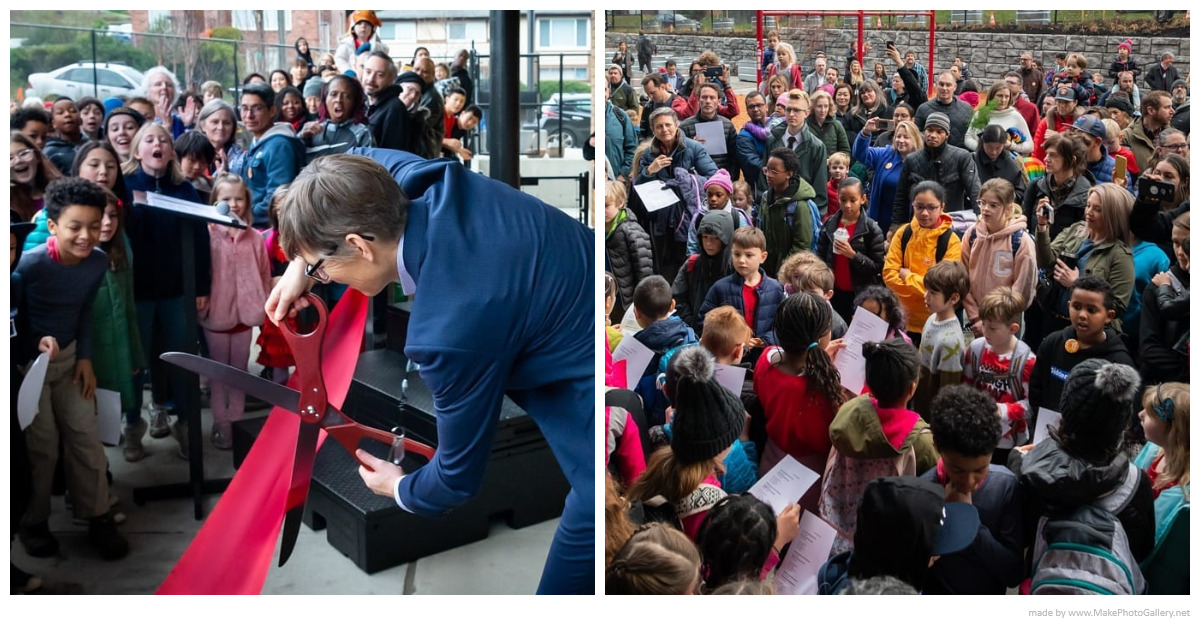 Located at the site of the old Imperial Lanes (2101 22nd Avenue S), the new building is the outcome of a partnership between Giddens (preschool to 5th grade) and Lake Washington Girls Middle School, after both independent schools found themselves needing to move on from outdated, rented facilities.

The schools joined forces in 2016 to construct a new facility that would serve both schools, allow each school to maintain its own identity, to grow and thrive, and, by the way, require each of us to only come up with approximately half the cost of constructing a new facility on our own.

In order to make this dream come true in short order, LWGMS alum parents David Matthews and Ashley Harper P’16 agreed to buy and hold the site of the former Imperial Lanes, at 2101 22nd Ave S, Seattle, WA 98144 for LWGMS and Giddens, while the schools’ staff and boards swiftly formed Two Schools LLC., launched capital campaigns, signed on with architects from Graham Baba and Anjali Grant Designs and project manager Costigan Integrated, and secured financing from Columbia Bank. Two Schools LLC. was able to buy the site back from Mr. Matthews and Ms. Harper, and in September 2018, broke ground on the $33M project.

After the morning ribbon cutting, students spent the remainder of the day acclimating to their new surroundings.

King County is partnering with the Millionair Club Charity to offer employment opportunities to people experiencing homelessness and poverty, as well as to help get problem garbage picked up in several of its unincorporated communities.

In its first year of operation, the Department of Local Services actively engaged with residents and business across unincorporated King County. The department identified graffiti clean-up and improving public spaces in neighborhood commercial and business areas as important for economic development. Residents in the unincorporated areas also said they support providing job opportunities for people experiencing housing insecurity.

Millionair Club Charity is a temporary staffing agency that connects people experiencing homelessness and poverty in the greater Seattle area with jobs and support services. It currently has similar contracts with the Metropolitan Improvement District and the Ballard Alliance.

Under the pilot program, Local Services will serve as the lead for operations and management of the project, with Solid Waste Division serving as the primary resourcing agency, providing $125,000 for six months. Contract workers will earn between $18-$20/hour.

South Seattle residents concerned about pedestrian, cyclist, and traffic safety in the Mount Baker Town Center area near Franklin High School can register their opinions in a new survey.

The Seattle Department of Transportation is hoping to receive feedback on how the area can become a “thriving, diverse, sustainable and affordable town center,” and has a running list of potential projects.

SDOT will select which projects to move forward with based on cost/ benefits and survey responses. Residents can take the survey here.