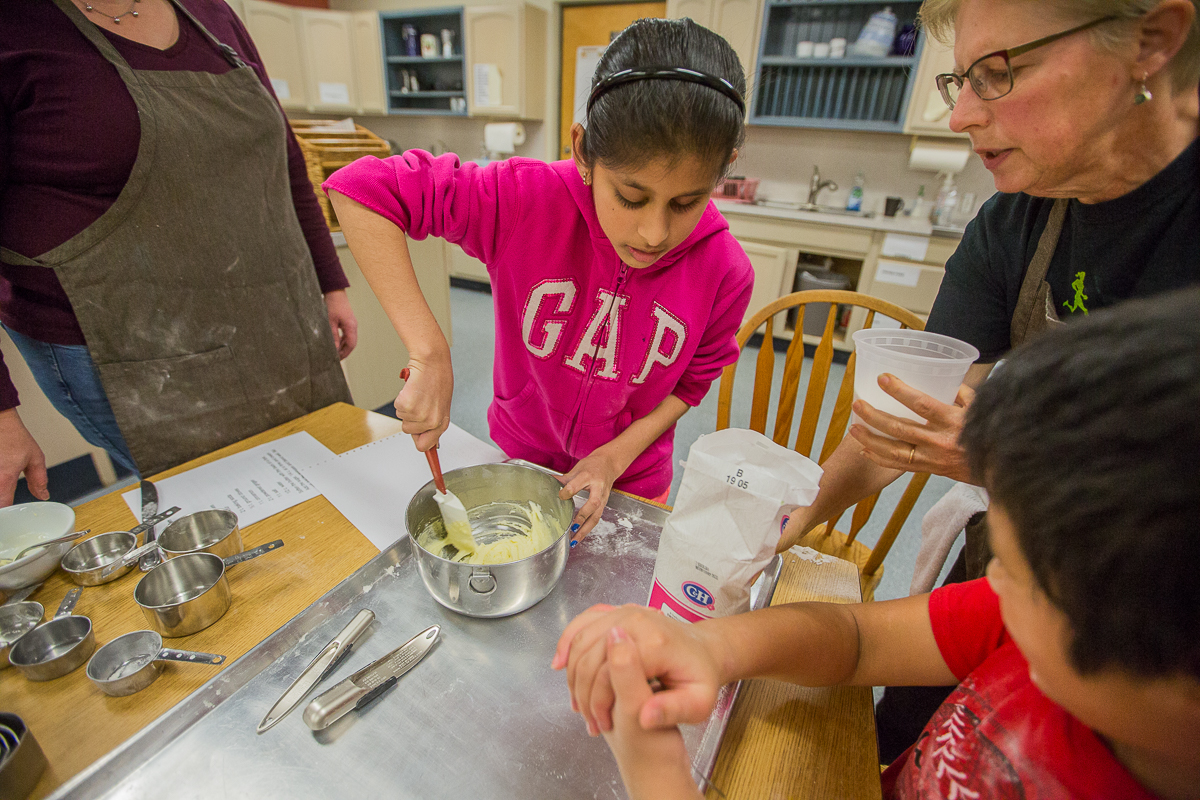 G burst into giggles, as the cup he was holding to measure flour tumbled into the bag, sending up a poof of fine, white powder. His workshop teacher, Aileen Mattsen, and fellow workshop student Arushi Mittal, couldn’t help themselves, and burst into laughter.

“Oh, boy, Arushi, he’s showing off for you. Okay’s let’s –– wait, where is it?” Mattsen said, between bursts of laughter, as G felt around the bag. “Okay, so, let’s put it down, and fill it up again. Let’s level it, and try it again.”

G and Mittal were two of the four youngsters taking part in a Dec. 14 baking workshop at the Washington State Department of Services for the Blind (DSB). Guided by three different teachers, the four learned to create delectable, holiday-themed gingerbread delights with different measuring utensils altered or created for those with visual impairments. The measuring cups had indentations on them; the tablespoons and teaspoons were retractable.

Such workshops are not unusual for the federally-funded and state-matched organization, which caters to both adults and children. Though its primary mission is to provide the skills necessary for people to return to work, it also provides training for young people, in order to ready them for the workforce later on, DSB Communications Manager LaDell Lockwood said. Youth Service Specialist Janet George organizes these workshops and other programs, all of which have something to do with a young person’s future. For instance, this workshop, she said, is more of a workplace readiness and adaptive living program. It also helps families learn to cook with their visually impaired children.

The organization also has several summer programs and workshops for visually impaired students, which involve everything from scavenger hunts to parties at which students can learn social skills to city explorations, during which they use the train and bus system. It also has the Bridge program, which prepares students to transition from high school to college.

But being visually impaired doesn’t necessarily mean life is much different, George said. For George, it’s just a different way of life.

Back in the kitchen, Lyla Duffy, the smallest of the students, felt her way around a cold oven. Teacher Kathleen invited Duffy to run her tiny hands along the top and bottom of the oven to understand where the heat would originate, and even climb inside the device to understand its size.

“Maybe we can start a baking shop, and call it … call it ––” Duffy paused, and then said earnestly, “blind baking.”

Kathleen flashed a smile at Duffy’s grandmother, Colleen Carlson, who was standing nearby, and said, “Maybe we can.”

As the children got to work measuring out their ingredients, Carlson remarked that one of the main reasons she brings Duffy to these workshops is so that the young girl can interact with other young people who also have visual impairments.

“And also just to learn the tricks –– we like to cook at home, where I cook with her. Just learning the tricks on how to make it easy to figure out. And I loved having her be able to climb in that oven and see it, because I’ve never even thought of doing that. Lyla said, she goes, ‘Granny, what? This is Hansel and Gretel now?’” Carlson said with a laugh.

Rashmi Mittal and her husband Shailendra Mittal also bring their daughter Arushi to the class for the social aspect. Their daughter also loves to bake –– her favorite thing to bake right now is brownies, Rashmi said –– and baking alongside other kids thrills the 13-year-old.

“She is just too competitive. She wants to do everything other kids are doing at her age,” Shailendra said with a smile. “She is a typical teenager.”