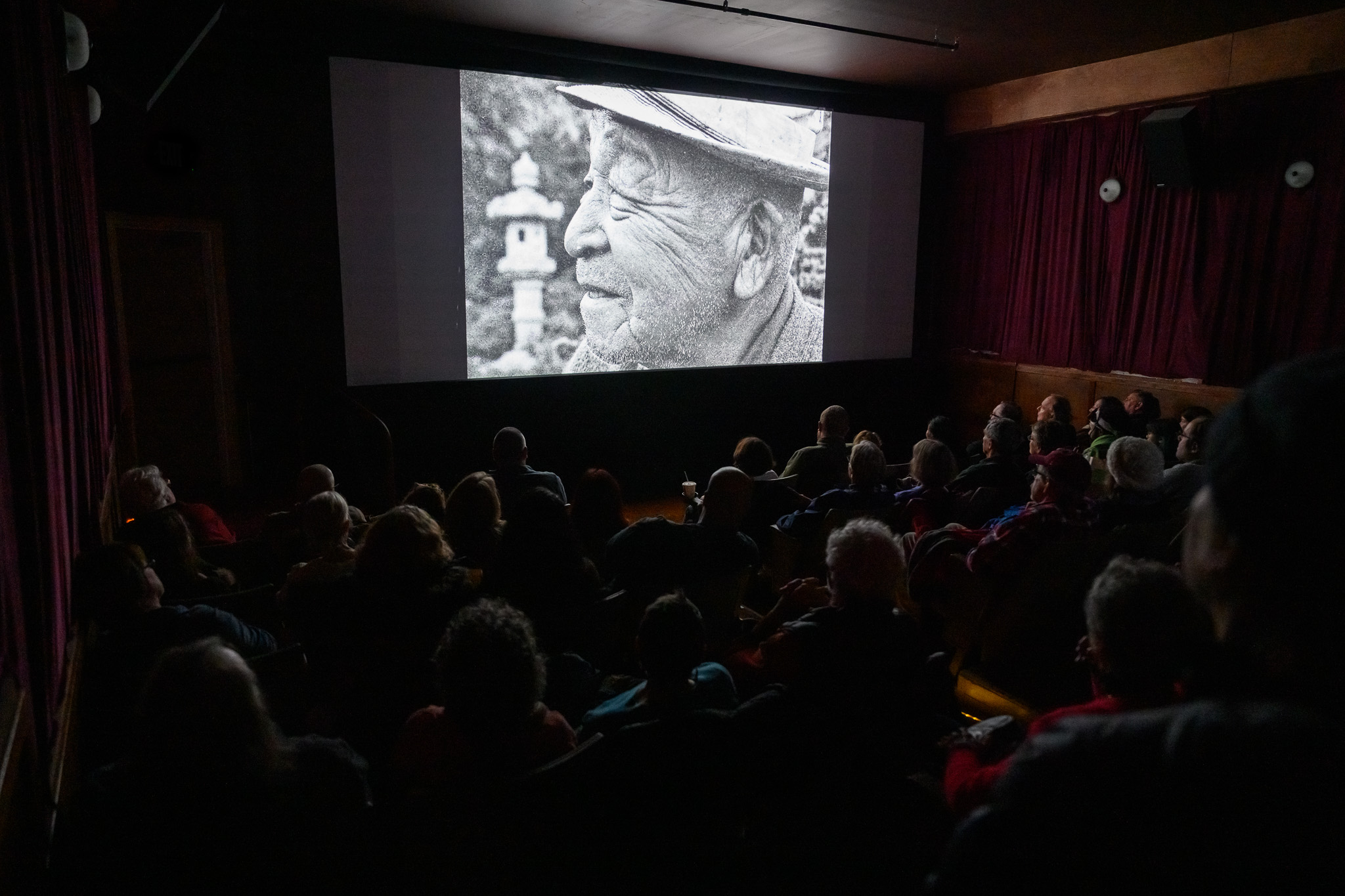 The crowd was so huge at the premiere of Fujitaro Kubota and His Garden at Ark Lodge Cinemas last week that a second screening was added and some eager theatergoers were turned away. The turnout of 150 viewers was overwhelming, said Joy Okazaki, Board President of the Kubota Garden Foundation which produced the film, but also overwhelmingly positive. “We know that people love the garden and knew telling the story of the garden was long overdue,” said Okazaki, amazed. “This confirmed for us how important it is to get that story out there.”

Fujitaro Kubota and His Garden is a documentary film about the extraordinary Japanese immigrant behind South Seattle’s beloved Kubota Garden, in Rainier Beach. The beautiful 20-acre public historical landmark, a fusion of traditional Japanese and Pacific Northwest landscaping, is Kubota’s lifetime masterpiece; a testament to not only his artistry but his perseverance in the face of anti-immigrant racism.

In 1927, Fujitarō Kubota, an immigrant from Shikoku Island, bought five acres of swampland in the Rainier Beach neighborhood. He and his family transformed the land into a nursery and display garden for their landscaping business, the Kubota Gardening Company. Kubota was self-taught with no prior gardening experience. His first US jobs had been at a sawmill and in property management. He had found his passion in landscaping, learnt as he went, and over time became a brilliant horticulturist with a thriving business.

But in 1942, Kubota and his family were forcibly removed from Seattle and incarcerated at Camp Minidoka in Idaho, part of the mass incarceration of 120,000 Japanese Americans during World War II. Kubota’s garden was neglected for years while the family was imprisoned. Kubota and his family returned to Seattle in 1945 and, amazingly, were able to restart their business. Over time, Kubota bought additional land and grew the garden to 20 acres. The garden became a center of Seattle Japanese American social and cultural activity for decades.

It wasn’t until recently, however, that someone finally decided to encapsulate Kubota’s journey in a film. Four years ago, the Kubota Garden Foundation was organizing their archive of 2,000 photographs, as well as newspaper clippings, artifacts, and other items about Fujitarō and his garden, collected from the Kubota family. They had also started interviewing various community people who had known Kubota. The organization realized that the story of the garden needed to be told and decided to make a movie and a book. The Foundation had never made either. They began by focusing on the movie.

In addition to their robust archive, the Foundation ended up with two dozen interviews (not all appear in the film). Together, archivist and historian, Ernie Dornfeld, the Foundation’s film editorial committee, filmmaker Gary Thomsen of Creek Productions, and many other volunteers spent the next four years carefully and thoughtfully piecing together Fujitaro Kubota and His Garden which premiered to eager audiences last week.

The film is down-to-earth and engrossing. “We didn’t want it to be too polished,” said Okazaki. “That’s not who we are, and that’s not what the garden’s about. We wanted it to be accessible to people, factual, interesting, inspirational.” It features compelling photographs and powerful clippings from the Foundation’s large archive. Viewers learn, for example, how Kubota was especially masterful with stone; how he brought in 400 tons of stone to sculpt Kubota Garden’s mountainside waterfall; and how he led the making of stone gardens at Minidoka, as a prisoner, because little would grow in the hot Idaho desert.

The film is also relatable and personable. Interviews with landscapers, historians, activists, and three of Kubota’s grandchildren offer a special look at Fujitarō’s lived life. “We wanted to tell the story with the real people who knew the garden, loved the garden, worked in the garden, were part of the family,” said Okazaki. Listening to stories told by those who knew him, viewers smiled at Kubota’s friendly personality; laughed at his fun sense of humor; quieted hearing he wept seeing his overgrown garden post-war; and nodded with respect at his determination despite the odds.

Okazaki herself grew up one mile east of Kubota’s garden. She used to sneak onto the property with friends, look for tadpoles, run around, and get lost. Her own father, aunt, and uncles had also been incarcerated during World War II, but no one spoke of it. The silence is a trauma coping mechanism commonly seen in those who survived the incarceration. This is why Kubota’s story is so important, says Okazaki. “To build all this stuff, have it taken away, and then to come back and build up again…it makes you appreciate more what we have today.”

Fujitarō Kubota passed away in 1973, at age 94. Because of anti-immigrant Washington State law which prohibited Japanese immigrants from owning or leasing land, Kubota did not become the legal owner of his garden until 1966. Seattle declared Kubota’s garden a historic landmark in 1981 and bought it from the Kubota family in 1987. Today, it is a public garden jointly maintained by Seattle Parks and Rec, the Kubota Garden Foundation, and volunteers.

Now, visitors come from all over the city, sometimes the state and even world, to enjoy Kubota’s garden, its beauty, and its profound legacy. With 103,000 annual visitors as of last month and an astoundingly successful film premiere this month, it is clear that while Kubota’s masterpiece is rooted in Rainier Beach, the reach of his story and garden are growing out to touch the hearts of many, many more.

The next public showing of Fujitaro Kubota and His Garden is Wednesday, January 29, 7:00-8:00PM at the Rainier Beach Community Club (6038 S. Pilgrim St.).