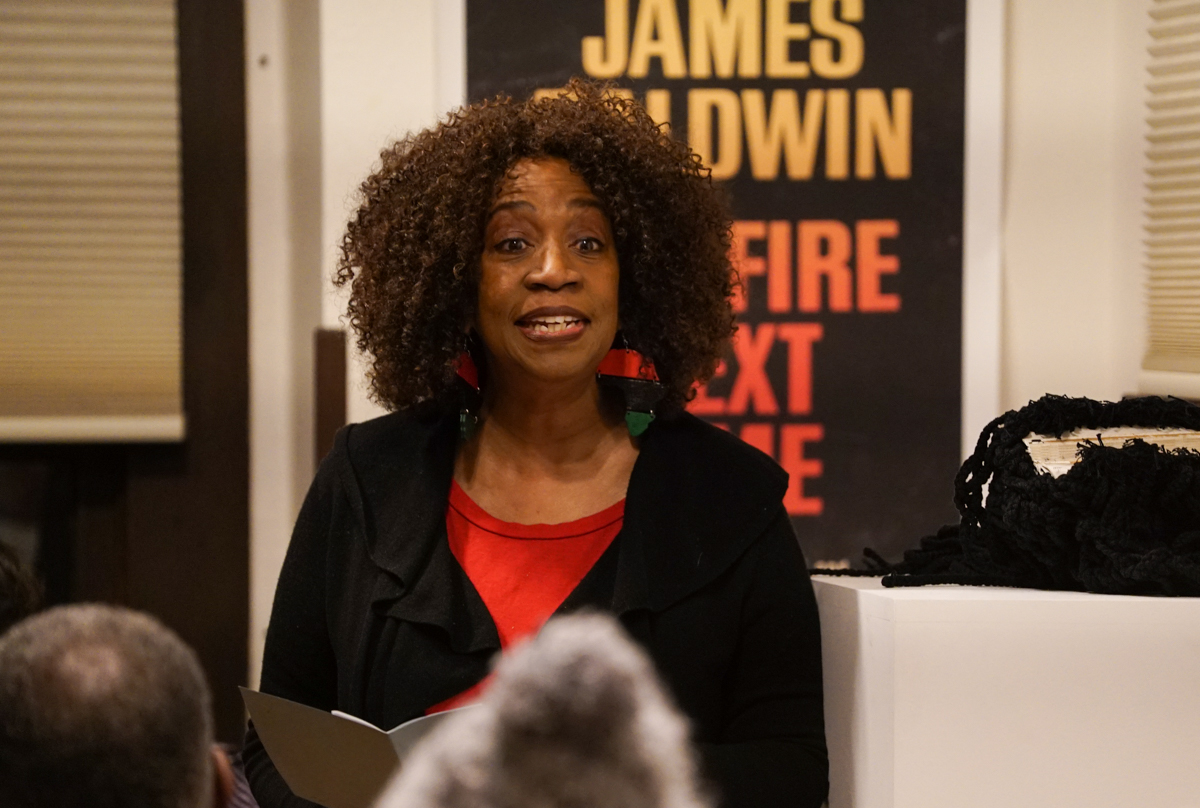 In a world where the history of Black folks is rarely told without the distorting lens of racial hostility, there is power and liberation is setting the record straight. As Seattle gentrifies and the Central District, the historical home of Seattle’s Black community, is completely transformed, some long-time Seattle residents are telling their own stories about where they grew up.  On Thursday, December 19, 2019, Wa Na Wari, a creative space that cultivates and preserves Black art, history, and community, featured members of the African American Writers’ Alliance in their first installation of Central District Stories.

When I arrived at Wa Na Wari, the road was dark and wet, large puddles pooled on the sidewalk and I could barely see as I pushed through the heavy sheets of rain. Would a good crowd show? I made my way up to the brightly lit veranda where Elisheba Johnson, one of the Wa Na Wari co-founders and curators, was waiting in the doorway. She greeted me and let me in—the place was already filling up. One of the storytellers was seated at the front of the room and there were about a dozen rows of chairs leading all the way to the back wall, most of them filled 15 minutes before the show.  Just past the last row of chairs I eyed a glossy wood table filled with cheese, crackers, cookies, wine and non-alcoholic fizzy drinks. Not one to pass up free food, I made a note to grab a bite after the show. In the meantime, I needed to get to the bottom of exactly what the Central District Stories event was about and why so many people had braved monsoon conditions just to hear these storytellers speak.

Elisheba and I made our way up a flight of mahogany steps to a room filled with books about Seattle’s Black past.  We sat on two velvety chairs. The door was ajar but we could only hear a faint murmur of voices from downstairs.

“Memory is an important part of culture keeping,” Elisheba said. “So what we’re interested in is exploring how oral history and art space merge.”

“Today we’re hoping that after the storytellers read their pieces, there will be a conversation. We’re hoping that by sharing stories communally, we can bring together all the pieces of our collective story,” Elisheba said.

As Elisheba finished her thought, the murmur of the crowd downstairs grew slightly louder. One of the writers, Gail Haynes, entered the room and Elisheba hurried off to wrangle the storytellers and finish up the final preparations for the show. I pushed the door closed.

Gail is a poet and the author of “Soulful and Sassy Reflections and Poems.” One of five children, she lived in the Central District for 15 years in the 1970s and 80s before selling her house and moving out of the state. She decided to participate in the Central District Stories event because she’s hoping to remind people of the importance of building community.

“What I want is for Black people to come back together and care about each other like we did before,” Gail said. “Back in them days there was such a bond, everyone was like a family. I’m hoping that we can find our way back to that place.”

As we finished up with our chat, Georgia McDade and Nation Sun Holmes waited outside the door. Gail went downstairs to take her position and I hurried Georgia and Nation into the room. We only had a few minutes before the show would begin and I had lots of questions.

Georgia McDade is the coordinator for the African American Writers’ Alliance and the curator of the night’s Central District Stories event. She was lively and passionate about her connection to the Central District. She seemed to know everyone and was connected to all kinds of important institutions in Seattle’s Black community. She was even Elisheba’s Sunday school teacher at Mount Zion Church, has four books of poetry, and curates reading events for Black writers around the city.

“I love stories,” Georgia said emphatically and with a gentle smile. “Unfortunately a lot of them do not get told. And many of those that don’t get told are ours. Or even if we’re involved, if we aren’t the narrator somehow our points of view don’t come through.”

Nation nodded in agreement. She knows that many stories don’t get told, and as a long-time Seattle resident and someone who grew up in the Central District in the 1980s she’s determined to make sure her voice is heard.

“When Georgia called me, she said ‘I know you have a story about the CD,’” Nation’s voice was light and playful. Georgia laughed and nodded at the retelling of how Nation became part of the project.

“It was a beautiful time to grow up,” Nation said. “It was protected. It was family.” Nation’s smile faded as she recounted why her family left the Central District after the neighborhood was inundated with drugs and all the negative ramifications of that epidemic. She moved to the north end to escape the violence but returned when her mother became ill. “Douglas Truth—the library—became my best friend,” she said, hinting at one of the roots of how she became a writer.

Georgia and Nation continued to reminisce about the past as we went downstairs. Almost every seat was filled and all the other writers were sitting in front facing the audience. Nation and Georgia took their places, and just as I took a seat, Elisheba welcomed everyone. Six Black women writers took turns stepping to the microphone to tell how they experienced the Central District long before it became a place of displacement and half a million dollar homes.

Margaret Stubblefield, spoke of her life going to kindergarten in the Central District—the classroom was diverse and no one seemed to care much or even notice. Jay Ware, who grew up in Tacoma but experienced a creative rebirth in Seattle, spoke of Black Arts West and how they afforded her creative opportunity that she could barely dream of finding in a thoroughly racist society. And Minnie Collins spoke of how in the past many people came to Seattle because of the Big B—Boeing and how the Central District had solid business and financial institutions such as Liberty Bank.

The audience was captivated and awed. There were points of loud applause, head bobbing in agreement, and even some call and response. But what was most striking about the experience were the conversations afterward. Some audience members shared their own stories of growing up in the Central District and of how they too felt awash in a tsunami of change. People warmly spoke of neighbors who moved away and of old businesses and buildings that no longer exist, paved over or replaced by new more upscale establishments. But what everyone did agree on was that Central District Stories provided a much needed space to reflect on their collective memory, and there is catharsis in knowing that they are not alone.