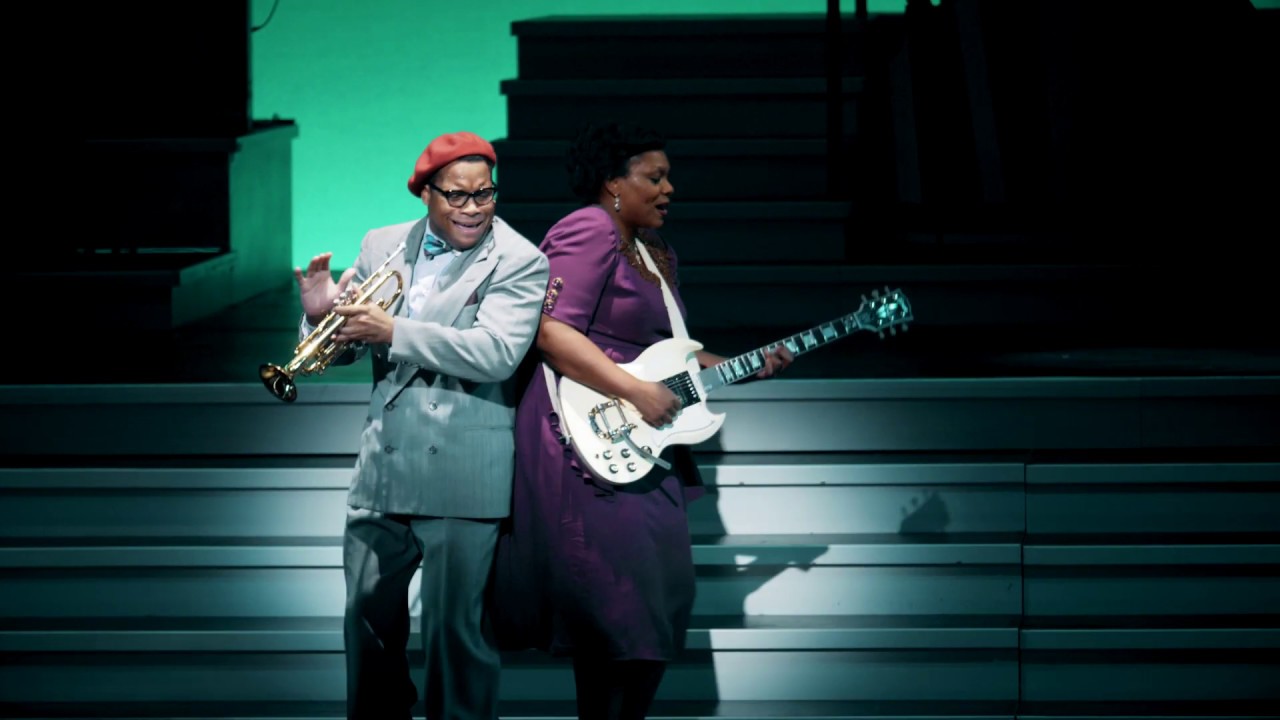 With its recently completed run, Shout Sister Shout! blared a lesson in resilience, love, and personal pair we should all take note of.

Sister Rosetta Tharpe grew up in the Black Church. Which is to say, Sister Rosetta Tharpe grew up in music. The Church of God in Christ (COGIC), founded in 1894 by Charles Harrison Mason, was radical for its encouragement of rhythmic musical experimentation and expression in service of praising the Lord, as well as allowing women, such as Sister Rosetta’s mother, Katie Bell Nubin, to preach and sing in church. From the moment she began performing and touring with her mother in 1921, singing God’s praises and playing the guitar unreasonably well, to the day she died in 1973, Sister Rosetta Tharpe was a bonafide gospel artist. The fact that she has been dubbed the “Godmother of Rock n’ Roll”, as well as getting post-humously inducted into the Rock N’ Roll Hall of Fame, reveals the true nature of electric blues and rock n’ roll: you can’t be hardcore without belief in something, you can’t be a badass unless you have had to practice resilience. Or at least, that’s how the way gets paved.

Early in the first act of Shout Sister Shout! the musical play co-created by playwright Cheryl L West and director Randy Johnson, based on the biography of the same name by Gayle F Wald which just finished its third production at Seattle Repertory Theater, a reporter interviewing the character of Sister Rosetta Tharpe at the height of her career asks her about her musical influences. It is suggested, in a sort of tongue in cheek, out of time way that Tharpe has been compared to Elvis Presley. On a note as powerful as godsong Rosetta laughs.

“That little boy was influenced by me!”

Getting into my seat at the Seattle Rep began to feel very high stakes after it took fifteen minutes to confirm I had a comp, only to finally get my tickets to an entirely different show. If it weren’t for Taylor the intrepid usher, I wouldn’t have been allowed late seating into the show, let alone an accessible seat. I ended up feeling glad though that my blood was pumping faster than normal by the time I was in the show for it allowed me to take in everything that I needed to appreciate it. In the balcony, one feels as if they have a true bird’s eye view of the world, and from here, Carrie Compere was the center of it. What that woman can do with her voice is incredible. Sister Rosetta Tharpe lived every second of her life for 58 years, and so did Compere, in two and a half hours. My friend remarked on how expertly Compere shifts her voice, when singing and speaking, to sound like a child, a teenager, an adult. A daughter, a wife, a lover, a woman of God, and one of the most influential musicians of the 20th century. Carrie Compere’s acting and singing chops, her spiritual and physical presence onstage, is a talent which she seems capable of setting in evolutionary motion, growing and changing since I saw her in The Color Purple, as well as growing and changing believably from start to finish of Shout Sister Shout!

I am grateful for musicals drenched in gospel, blues, jazz, and soul. As a musical theatre writer and performer I believe that American culture is made of African diasporic artistic innovation, and so are we, the ones who survived because we sent our call into the world and heard it echo back to us. I am angry that I often question my choice to audition with a “Black song” from a “Black musical” when going out for a role that claims to have universal (read: white, or not Black) appeal, because I worry that I pigeon-hole myself by being too sonically, emotionally, spiritually Black. As a fourth-grader, I had the distinct honor of playing Billie Holiday in the distinctly dishonorable context of the children’s musical We Haz Jazz.

In the play, suburban white children learned about the role blues and jazz could play in their minor problems and boring lives when they are visited by the ghosts of musical greats, most of whom are Black. I was the only Black actor in the production, and Billie Holiday, that nightingale, has no solo. She encourages the living white girl she mentors to express herself through song and literally hands her the mic. Shout Sister Shout! has all microphones and lights (lighting design by Robert Wierzel) where they belong, in front of the mouths of and shining on the bodies of a glorious ensemble of musicians, actors, and dancers.

Director Randy Johnson revealed in an interview for the Seattle Rep’s website that the earlier version of Shout, Sister, Shout the musical featured Sister Rosetta Tharpe’s talent, wisdom, and legacy explored through the lens of a young white boy in the modern era experiencing a sexual identity crisis. I am so glad I did not see this version. If any of this story had been thinned out by the inclusion or prioritizing of a white, male, contemporary perspective, we might have been cheated of the time we deserved with the time-traveling, world-building talents of the Seattle Production.

I can’t fit all the names into a viable sentence so I am just going to list them, like an important ritual. All hail musical director Sheilah V Walker, choreographer William Carlos Angulo, and costume designer Emilio Sosa, who made me believe in every inch of era moved through onstage! All hail the ensemble of dynamo performers including Joseph Anthony Byrd (Cab Calloway), Chaz Rose (Dizzy Gillespie), Cristin Byrdsong (Little Richard), Timothy Ware (Russell Morrison), Carol Dennis (Katie Bell Nubin and Mahalia Jackson), Alison Semmes (Marie Knight), Porscha Shaw, Alexis Tidwell, and Jason Kappus, each already legends in their own right! All hail the genius band of musicians Evan Flory-Barnes (bass), Justin S. Davis (guitar), Daniel Rainard (guitar), Sheilah V. Walker (conductor/Hammond organ), Emma Weiss (keyboard 1/rehearsal pianist), Jamael Nance (drums), and Nathan Breedlove (trumpet), who held us down through the love, praise, violence, brilliance, creation, and survival, keeping always beneath us and around us a dreamy sonic bed to fall into! All hail them all!

This isn’t even an exhaustive list of the dream team which came together to make this musical bio-epic something I heard on high. Most heavenly of all were the harmonies between Carrie Compere and Alison Semmes, playing longtime touring partners and eventual lovers, Tharpe and Knight. Sitting at a piano together, they were like winged beings moving faster than the speed of sound. With their four hands on the piano, eyes on each other and voices flying around the room, I believed in Black femme love, in the power of artistic collaboration, in God, in whatever was needed for that moment to last forever.

Sometimes writers are limited by what we believe we can know for sure about a period of a person’s life, but I admired the courage of Cheryl L West, Randy Johnson (and Gayle F Wald) to allow the character of Sister Rosetta Tharpe to declare to her mother that Marie Knight (who left Tharpe after her mother and children died in a fire, claiming that this event was God punishing them) was the love of her life. Upon hearing this, Katie Bell Nubin does something surprising- unlike her reaction to her daughter singing light into dark places like nightclubs and bars, she doesn’t attempt to bring her home and lock her up, she accepts this truth and tells Rosetta that it’s still possible for her to be happy with the man she’s just married, even if she loves someone else. And by all appearances, she does. She takes care and is taken care of, by her partner, her God, her music, and her fans.

Now it’s our job to take care of her legacy. Sister Rosetta Tharpe had the resilience to create a stage name by altering the surname of her abusive first husband. She had the resilience and the power to become a rock goddess after being a little Black girl born in Arkansas in 1915. The resilience, the power, and the love to bring Church into the Club, and the party into the pew. She is a musical ancestor of Little Richard, Elvis Presley, Johnny Cash, Bob Dylan, and many more. If we can remember their names, we can, and we must remember Sister Rosetta Tharpe. Hats off to the future Tony-winning Shout Sister Shout!, for helping to ensure, via the perfect medium, that we do just that.