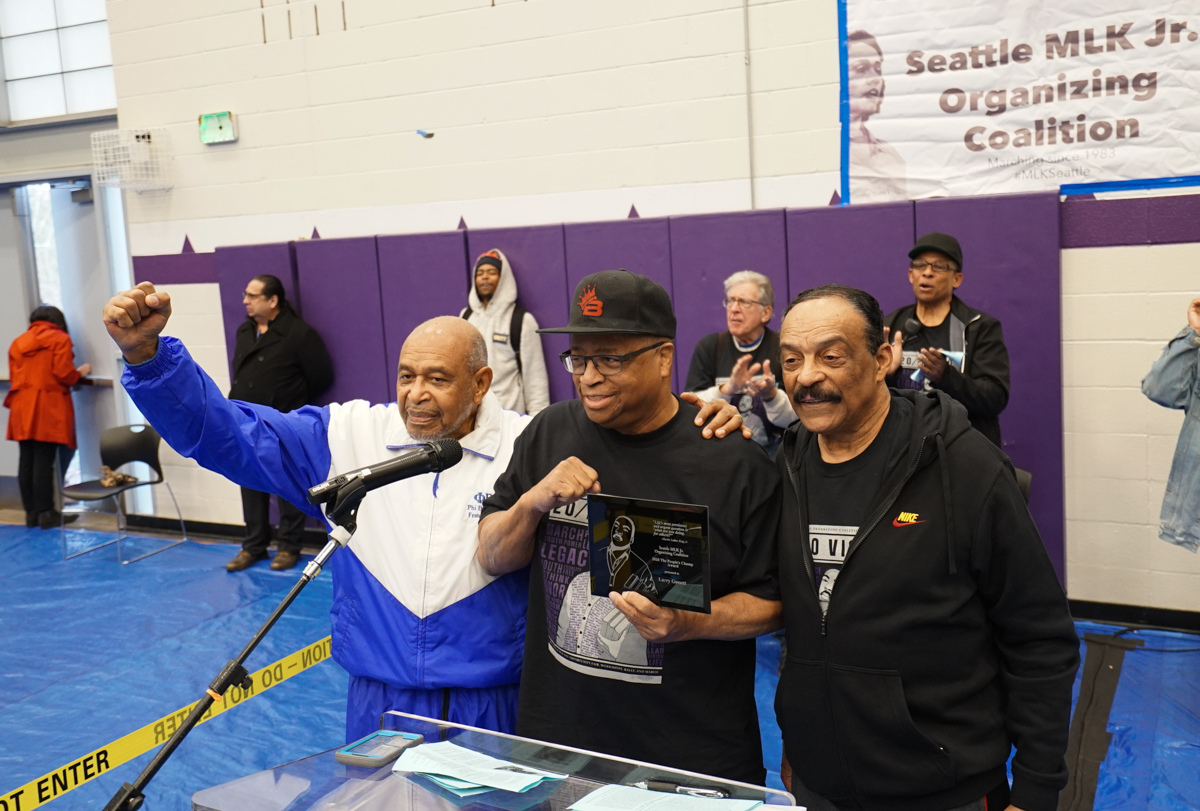 He may have lost the election, but he’s clearly still beloved.

Since losing his reelection bid for King County Council last November, Larry Gossett has been formally recognized all across town for his 25 years of service on the Council, and the social justice work he has done throughout his adulthood. On Martin Luther King Jr. Day, Gossett was honored with a standing ovation at the packed Garfield High School gym.

Another public acknowledgement took place Thursday night at El Centro de la Raza’s Centilia Cultural Center. The venue  was so packed that – in the middle of January – Robert Maestas Plaza’s garage door-style wall needed to be opened so the overflowing crowd could stand in the rain to hear the program.

They all came to say thanks. Residents told stories about how Gossett helped them get into the University of Washington, reenter the community after incarceration, and build a diverse coalition of activists fighting for justice.

Others talked about his leadership in creating the Educational Opportunity Program at the UW, leading the Council in re-naming the county after Martin Luther King Jr, and many other legislative actions. Past and present Council members, including Washington Attorney General, Bob Ferguson were present to fete Gossett. Girmay Zahilay, who succeeds Gossett, came by to thank Gossett for being a role model for the people of King County.

Entertainment was provided by young men from the NW Tap Connection, a DJ spun celebratory R &B music that has been the soundtrack of Gossett’s life, and his family, led by his wife, Rhonda Oden Gossett, passed the mic to give their personal thanks.

Gossett thanked his staff, Larry Evans, Chandler Gayton, Kamilah Brown – and Cindy Domingo who has led Gossett’s staff for all 25 years he was on the Council. The event was planned by Brown, Elizabeth Evans of King County Council member Rod Dembowski’s staff, Kendrick Glover of GEM, Rentia Borders, a County Council adminstrator, and Le’Jayah Washington, a former Gossett intern.

Ever the organizer, he was wistful that there were no sign-in sheets for contact information on the hundreds of people who attended. He ended the program saying, “I may be retired from the Council, but I’ll never be retired from community organizing!” Look for Larry Gossett to continue to be a force for justice.