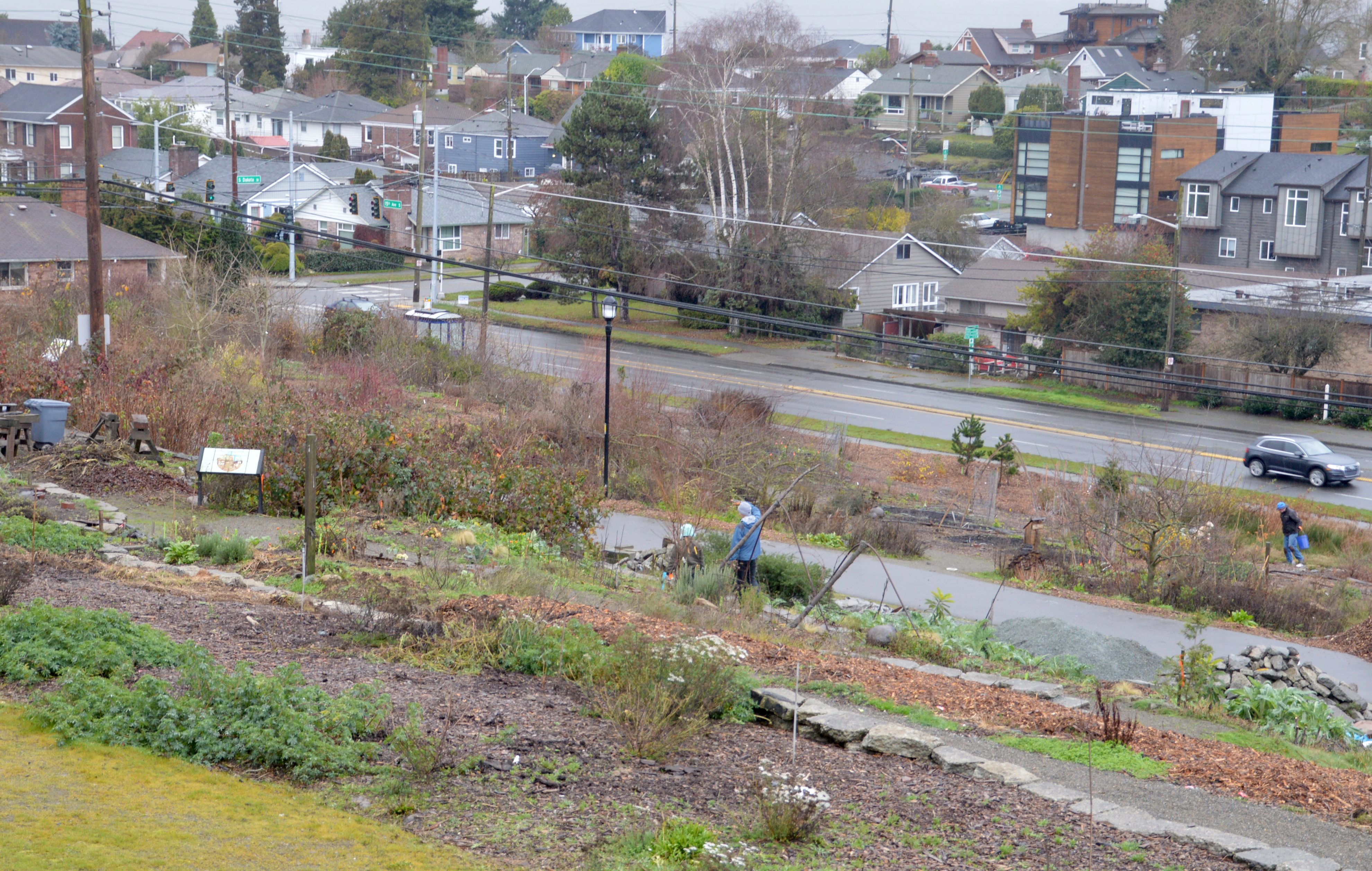 Every day, hundreds of commuters pass the Beacon Food Forest on their way to I-5 with no idea they are passing possibly one of the largest food forest projects on public land in the United States. This seven acre plot, is a trail-blazer for such urban permaculture projects around the world.

The Beacon Food Forest began in 2009 as a final project for a permaculture design course that co-founders Jacqueline Cramer and Glenn Herlihy were taking. During the course, the co-founders chose the Jefferson Park site and with community support, the City awarded grants to start the project.

A decade later, the Beacon Food Forest is evolving. It has become a nonprofit, hired its first staffer, and took steps to have its board and leadership better reflect the diversity of the Beacon Hill neighborhood. Other new features include a bee colony and a native plant wetlands area.

A guiding principle in permaculture is “looking at nature as the guiding force to how to plant, how to manage water, how to build soil,” Herlihy explained. During extensive research while conceptualizing the Beacon Food Forest, Herlihy also drew on formalized permaculture ideas developed in Australia and England.

A food forest imitates a forest ecosystem, often using edible plants that work in harmony such as the Native American practice of planting corn, beans and squash together — the “three sisters” — which support each other. The Beacon Food Forest aims to recreate complex symbiotic relationships between plants, animals and insects. Plants that attract pollinators, provide natural pest control, or fertilize the soil, might be planted near others to help them.

Co-founder Herlihy saw the project as an opportunity to build a commons that would feed the community. “Might have been a little idealistic, but that’s what it takes nowadays, to live idealistically,” he said.

On a grey day in mid-December, only the most dedicated showed up for a pre-holiday work party. They set to work planting trees, building up the soil, and laying the foundations, which lies on the western slope of Jefferson Park. “It’s not raining,” insisted David Perasso, as it poured down on a dozen volunteers breaking off into tasks at the Beacon Food Forest.

During the work party, volunteers planted a strawberry tree, a bay laurel and a toona tree, which has edible foliage used throughout Asian cooking joining the hearty almond, plum, quince, pomegranate, apple, mulberry trees already planted in the food forest.

Perasso, is an expert in native habitat restoration, and took charge to create a native plant habitat in a natural wetland area in a corner of the food forest. He hopes restoring native plant habitats — which “are rapidly being destroyed, what little is left of them” — will create space for birds and insects that used to live here. Some of the native plants, such as camas, are edible, and Parasso hopes they might be available to local tribes and others to harvest.

Brynn Hendrickson, who lives a block away from the Food Forest, harvested from the forest over the summer, and wanted to give back. “If I pick here, I should work here,” she said. Volunteering is also an opportunity to build gardening skills, and to feel part of the community.

Will Rak volunteered with the Food Forest on and off since 2013, and it inspired him to change careers from a marketing job he hated. He now works in landscaping and permaculture design. “Here, a huge part of what we do is shaped by the fact that it’s done as a community.”

Josef Stitts was drawn to the food forest because it “embraces abundance, so that anyone who’s just passing by can partake in it,” he said. “I like that it naturally gifts anonymously to anyone. That’s a really just thing.” Stitts completed a senior thesis about the Beacon Food Forest while studying landscape architecture in Edinburgh; at the time, he had no plans to move to Seattle.

The informal, grassroots style of the Beacon Food Forest is one of its strengths, said Carla Penderock, community outreach coordinator for the organization, and its only paid staff member. It’s easy for motivated volunteers to “realize their own project ideas really quickly, because we’re not such a formalized organization,” Penderock said — as Perasso did with the wetlands.

“We have a really good diversity of ages, abilities, ethnicities on the board now,” said Penderock, including people who live in the neighborhood.

The Beacon Food Forest is being built out incrementally. Phase 2 is estimated to take five years. Combined with Phase 1, it will equal half of the eventual seven acres the site is allowed. “We almost have to slow ourselves down, kind of slow down our enthusiasm,” said Penderock.

Building slowly is important for sustainability of the ecosystem — but also of people, Penderock said. “As a volunteer organization, we’re founded on relationships, and creating relationships with people takes time,” Penderock said. “People only stay involved when they feel a real sense of community.”

This sense of community is one of the attractions of the project for dedicated volunteers, especially those who would come out on a drizzly December afternoon. “This is a fabulous community,” said Don Comstock, who has been volunteering with the food forest for five years, and serves on the board as treasurer. For proof, he said, just look at the way volunteers treat each other. “We look to see what other people are doing and how we can support them. And that’s fairly rare in our society,” Comstock said with a laugh.

Herlihy thinks the tradition of eating lunch together after a work party, meeting people and building community, is crucial for the project and is most excited about the simple goal at the heart of the project: Growing food for the community. ”If we can do it, it’s a beautiful thing,” he said. “This world is full of crazy things right now. This project seems crazy in itself, but in a different direction. It’s good crazy.”

Rebuilding the natural eco-system, growing edibles, sharing the food and working together in community. What could be better for the environmental and the community? All are invited to drop by and partake of the food and volunteer. Look for Beacon Food Forest activities as the weather improves.

Chetanya Robinson is a Seattle based journalist who likes learning new languages, writing on eclectic topics, and spending time in nature.

2 thoughts on “A Decade Old, Beacon Food Forest Evolves Into its Second Phase”