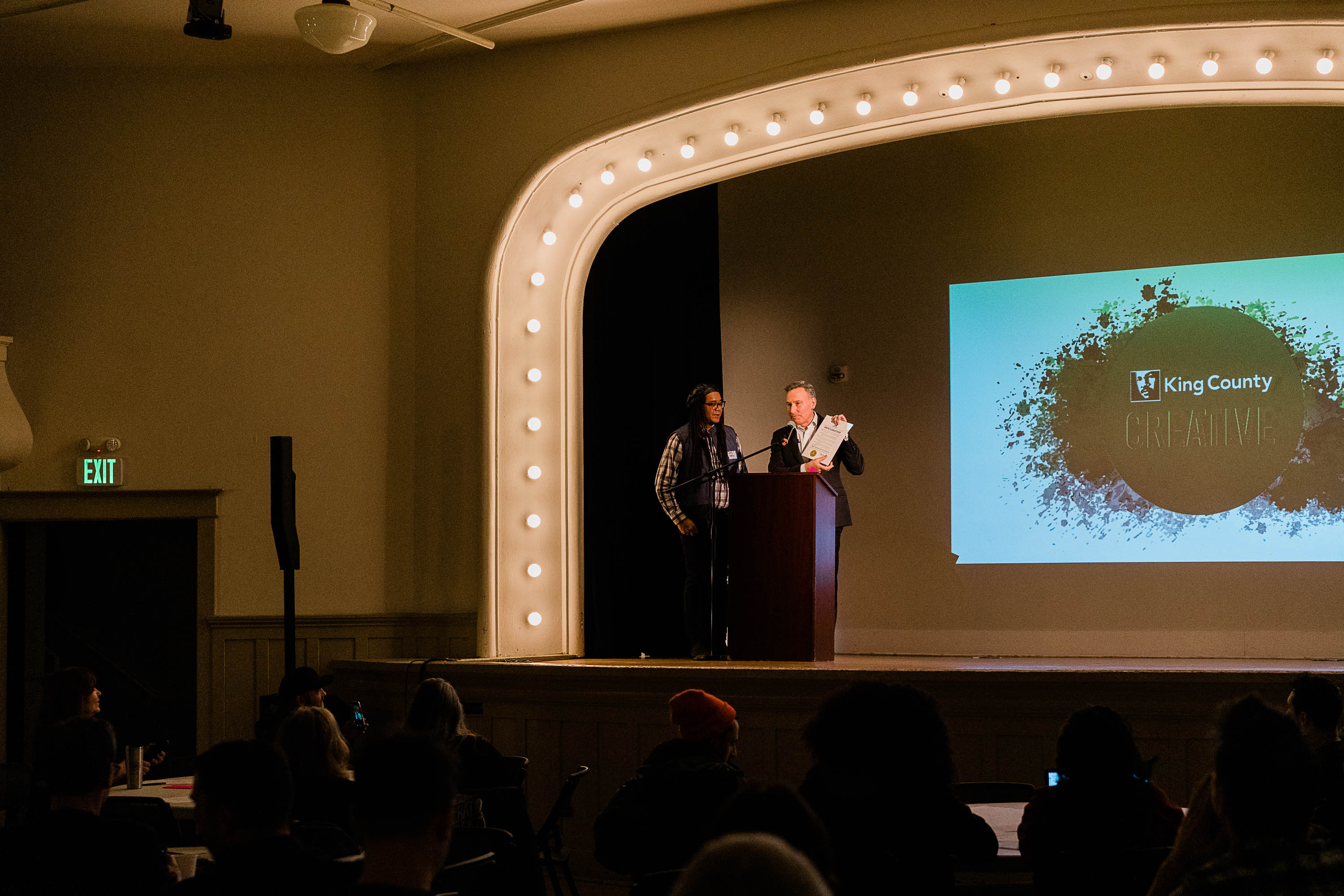 “King County is excited to be able to participate in helping us create another generation of successful music industry and music culture,” Constantine said as he spoke to the group on Wednesday night. “We’re already well into a similar effort to promote film and video production, and this expansion of music is something that’s really close to my heart. Music has been a big part of my life.”

The music kickoff comes after the initiative leveraged part of the King County Council’s $169 million-dollar 2019-2020 budget supplement to stimulate regional film production last fall. The same resources will be leveraged for the music industry, according to Constantine, particularly to address an affordability crisis that is edging artists out of the city as well as the creation of opportunity for youth.

Constantine, a Seattle native, opened with a speech about how music shaped his youth, and how many of the musical resources of that time have “been drained away by the very affluence that has come to our region, by the run up in real estate prices. People are driven apart from each other. It’s not only an individual not having a home or a place to perform, but not having place for musicians [as] a community to exchange ideas,” he said.

The county executive also honored Terry Morgan, who just celebrated the forty-year anniversary of his concert promotion company Modern Enterprises LLC, and then he turned it over to Becker.

“We want music creators to have what they need to survive in our community,” said Becker. “We know what some of the core issues are, we’ve been hearing you, and so tonight we want to ask you to tackle one of five core issues. On the table in front of you are the five issues we’ve identified.”

According to Becker, the executive order seeks to address the need for affordable housing, rehearsal space, inclusion and equity in the industry, all ages scene support, and the retention and preservation of live music venues. Attendees were asked to collaborate with their table on one of these five issues and jot down potential solutions. After an hour, each table was asked to share what they’d brainstormed.

The group came up with ideas both new and old. Local musician Andrew Joslyn shared his table’s idea to bring more music business to the city, Womxn in Music’s Nikki Baron suggested forming an online database to connect artists with potential patrons, while Austin, TX was discussed as an example of the sort of local music economy to strive for.

By the end of the two-hour meeting, Becker collected each table’s butcher paper of ideas and said she had plans to bring them back to the county’s new 12-person music advisory board. But in the end, responses to the launch party were mixed, and some audience-members expressed their skepticisms.

During Constantine’s discussed finding the resources for “creating a generation or two or three of a community where creativity is central,” Julie Chang Schulman, a hip-hop artist and organizer with the No New Youth Jail movement, interrupted him. “Don’t build a youth jail!” she yelled, calling attention to the controversial $232 million-dollar King County youth detention center which opened its doors Wednesday, just blocks away from Washington Hall.

At the same time, musicians like Zan Fiskum were “extremely encouraged” by the gathering.

“I didn’t know the city was aware of issues that I struggle with personally,” she said.

As well, the South End’s own Maurice Jones Jr., program manager at KVRU and the former director of Central Area Youth Association’s performing arts program in the 1990s, thought the meeting as a good starting point.

“It’s mainly about [figuring out] what do we want to do and doing it. I want to see where this lands and I want to help,” he said.