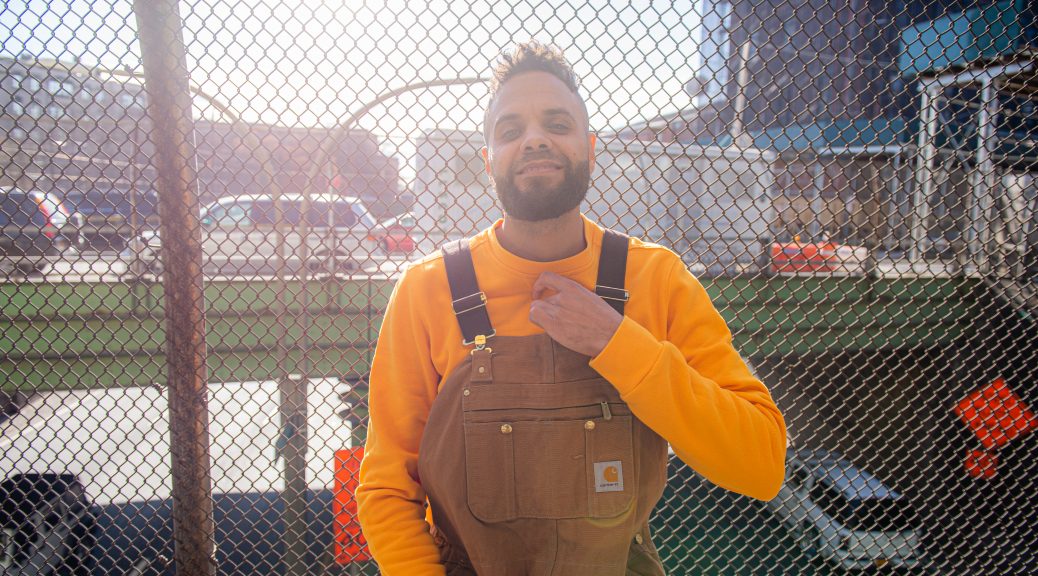 Garfield High School graduate and South Seattle native Kassa Overall is a modern day musical Renaissance man. He is an esteemed producer, drummer, singer and emcee, whose compositional juxtaposition of art and reality has solidified him as key player in the current intersectional evolution of contemporary jazz and hip hop.

Rather than straddling numerous different genres in the typical fusion sense, Overall dissects them intentionally, searching for overarching themes that can be built on to create new avenues of unrestrained self-expression. No longer interested in compromising his artistic vision for the sake of accessibility and acceptance, Overall’s unique strand of non-linear avant-rap flows back and forth between acoustic and electronic, logical and emotive, blurring the lines and boundaries of overused and outdated labels.

In an effort to promote his new album I Think I’m Good (Brownswood Recordings), available Feb. 28, 2020, Overall will be making a hometown stop in Seattle, performing Sunday March 1st at the Triple Door, in the midst of the West Coast leg of his world tour.

Overall had just returned stateside from Japan when he spoke with The South Seattle Emerald about his unique approach to production, as well as how he grappled with blending jazz and hip hop into something else entirely.

Gus Marshall: How was Japan?

Kassa Overall: Japan was awesome. That was my first time headlining a show in Japan. It was actually like my first big planned gig: it was at a real dope venue, pretty big room, and they took care of us, we had everything we needed. It was kind of surreal, you know, and it went well man.

GM: Where did you play?

GM: So I thought you were from the CD (Central District), but now I’m hearing you grew up over by Franklin (High School). So where did you grow up?

GM: Do you feel like growing up in the South End has any impact on you as an artist?

KO: I mean the short answer is absolutely, I’m a product of where I came from. I think that the South End and the Seattle art community in general allowed me to see that it was possible. From even 5th and 6th grade I was already starting to perform publicly and professionally. And the idea of it being a career path was very realistic early on. Just having places to develop my talent was huge, and the community is directly responsible for that.

GM: I’ve heard you refer to yourself as a backpack jazz producer. Can you elaborate on that concept?

KO: Totally. I actually wrote this little zine, about making the new album, and kind of what the backpack producer definition is. Basically, it’s a way to describe how I make my music, because it’s a lot different than the standard process. I started out making beats like everybody else, and also playing live instruments; playing drums, and playing jazz, and all of that. And as I started combining those two elements, I realized that there was a place for me that hadn’t been fully exploited yet: as being a producer, an electronic producer, and speaking the language of studied jazz and what not.

One of the main ways I bring those things together is, I’ll have my studio in my backpack: meaning like my laptop, a mic, my interface, and whatever else I might need for the given situation. And I’ll go to the homie’s house, and most musicians that I collaborate with will have some sort of little set up at their house as well. So I go to their crib and set up my mic, set up my interface, and it allows me to get high level musicians recording on high level sound equipment without having to get the studio.

And it will even extend as far as the studio itself. I’ll get some studio time and record musicians in the studio, but as soon as the studio session was over, I would bounce those sessions down and put them back on my laptop, so that I could go back to the laptop and headphone approach to making beats.

With the first album, I did that a little bit, but I was still tied to the idea that you needed to be in the big studio to make a high quality sound. I realized that being so tied to the studio actually slowed me down, and it would also dilute my sound a little bit: because if I’m the last person to touch the session, or the last person to work on the song, it’s almost like having final cut in the movies. It kind of cuts out the engineer, or cuts another person to work the gear.

So it’s all about that laptop bedroom producer kind of energy, but then also the mobile set up. It’s kinda like the evolution past the bedroom producer to the backpack producer. And also being on tour, I can work on music on tour, I can get sounds on the street. If I hear something cool I can record it, and I use that to take those on-the-go approaches seriously.

GM: So is traveling and being on-the-go playing into your creative process?

GM: I read that you used to struggle with finding a balance and connection between jazz and hip hop. But your debut album, Go Get Ice Cream and Listen to Jazz, is like a seamless blend of these different worlds. How did you come to terms with melding different genres into one cohesive musical movement?

KO: I think that for me, one of the biggest benefits to my path in music is that I took the time to really deal with those idioms
individually. I’ve been playing drums since I was a toddler. I took drum lessons in middle school, and went to a music school for jazz performance. I just really played the drums as the drums. It was really connected to drummers like Elvin Jones and Max Roach, Philly Joe Jones, Roy Haynes, and my teacher Billy Hart. And also Larry Jones, my first teacher from Seattle. Larry Jones really put me on to the science of just playing the drums. By developing that language as is, I really got to understand the building blocks of that language.

In the same token, I was really into hip hop, just for the beats and the raps. I wasn’t really thinking like a jazz musician when I was making hip hop. That divide, which eventually became toxic, was at first what really allowed me to learn those idioms as they were. And eventually it got to the point where keeping them separate was holding back my creative process. I had to just stop thinking about if this thing I am making is jazz or hip hop. I had to start going like, ‘what is the best song I can make, and let me use everything in my arsenal to make it the most powerful piece of art I can’.

GM: Do you feel you have a rhythmic-centered approach to composition and production?

KO: Yes, but also no. I think that the type of drums I play is a melodic drumming approach. There are a lot of different types of drummers. Some drummers are more about just the pocket, you know, the kick snare, and that kind of groove thing. And other drummers are more about the language, almost like vocalism’s on the drum set, a lot of African drumming and Afro-Cuban hand drumming: it really gets into the melodic nature of the drums.

I think that, though I am rhythm-centric, I am really starting to think that it’s less about whether it’s rhythm-centric, or melodic, or harmonic-centric, and more about sound texture-centric. I’m thinking more about the type of sound, than the rhythm or the chord, you know. I’m really just trying to get more into the color of the sounds. I do think I am a rhythm-centric thinker. The idea of rhythm, it connects to so many aspects of life and art. Whether it’s the timing in stand-up comedy or the editing in film. It’s really all connected. As I have studied rhythm, I’ve also started to think about how to apply these things to not only music, because it applies to so much. Timing is everything, as they say.

GM: Do you have any specific musical goals?

KO: I’ve always felt like one of my goals and missions in life was to find something new. And it always seems like it is so hard to find something new, like people: everyone is trying to find something new, but a lot of the times it’s not really new. I don’t necessarily think I am doing anything new, really. I just think I am kind of mixing
different things that have already been. But it does feel like I am tapping into a perspective that people haven’t looked from before, so it is kind of exciting, how far can we go with this idea.

GM: What is the importance of the reoccurring voicemails found throughout your first album?

KO: That’s a good question. I feel like there is a good answer to this question, and I think it is connected beyond the voice mails. I think it allows the music to seem a little bit more than just music. Almost like a movie, or an episode, or a story. So you have the music, but then there’s a voicemail, and it gives a commentary on the commentary, which is the music.

It blurs the line between life and art a little bit, because the ones on Go Get Ice Cream and Listen to Jazz were actually real voice-mails. There’s a short message from my girlfriend, and she says “I’m on a train, let’s go get ice cream and listen to jazz.” That was staged, but it was still a voicemail from a phone. The rest are actual voicemails that are just from life. I liked that people spend so much time trying to come up with something, like come up with some lyrics, or come up with a rhythm, and you probably already got something dope on your phone. If you think about it, just what do you got laying around? Throw that in there, and see what it sounds like.

Kassa Overall performs at The Triple Door, March 1, 7:30pm, as a part of The Seattle Jazz and Culture Festival. $15. All Ages.