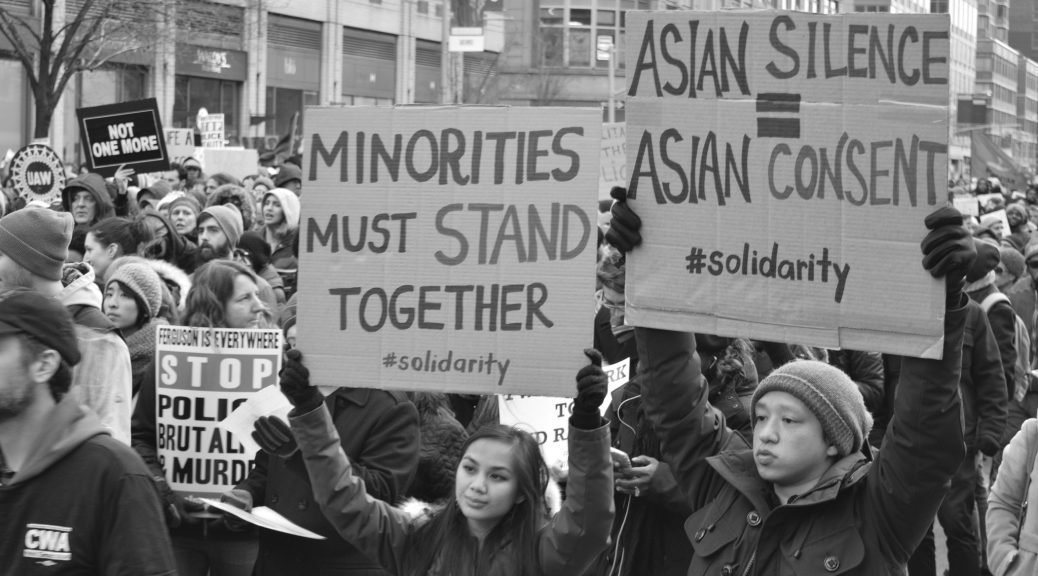 The call for liberation fuels the actions of many.  For those of us who march to the beat of justice, this call pushes us to stand up and take action, even when the resistance bears so greatly on our souls. It forces us to work for the light at the end of a long battle. And it pushes us to dive deeply into our collective shadow to root out the destructive racial narratives that fester and collide against our struggle for liberation.

With Black History Month just ended, we call special attention to interrupting the anti-blackness that lives in the American shadow.  We ask ourselves, “how are we complicit in upholding anti-blackness and the white supremacy that feeds it? Are we willing to interrupt our complicity in order to move in the rhythm of justice? In our unwavering integrity, the quest for these answers will move us to a healing place where liberation stands to become a reality rather than just part of our beautiful imagination.

Seattle Asians for Black Lives are working hard to answer these questions. At the heart of their work is an active commitment to both interrogate their complicity in anti-blackness and work to heal from it. The nature of their work is best expressed by Dr. King: “none of us are free until we are all free.”

“The purpose of Seattle Asians for Black Lives is to invite Asian folks to be doing our work, and showing up in solidarity with current black activists,” explained Yin Yu, one of the many organizers involved in their work.  “We deeply examine our own anti-blackness and cultivate a space for discussing how it has shown up for us, to be able to dissect it and name it so we can show up better next time.”

Yu described their roots as loosely tied to the Bay Area Asians4BlackLives. In 2014, many local and national activists were deeply moved after watching Asians4BlackLives members join several black activist groups to shut down the Oakland Police Precinct in protest of police violence towards the black community.

“Asian folks took risks and bike locked their necks to the police precinct,” Yu shared. “The risking of their privileges sparked multiple chapters across America.”

Yet Seattle Asians for Black Lives didn’t formally launch until, 2017, after Seattle’s historic “Block the Bunker” in September 2016.  During this protest, Asian activists joined members of Black Lives Matter to successfully stall the construction of the newly proposed North Seattle police precinct.  Inspired by the power of solidarity, Asian organizers from Parisol/Pacific Rim Solidarity Network, Anakbyan (a youth and student organization addressing issues affecting Filipinos in the U.S. and in the Philippines), Asian Pacific Islander Coalition (APIC), Chinatown International District Coalition and Humbows not Hotels united to form Seattle Asians for Black Lives.

So what does the work of liberation from anti-blackness look like? Though they are a relatively new coalition, Seattle Asians for Black Lives has engaged in several key actions since their inception.

On Martin Luther King weekend, the activist group hosted their second teach-in, entitled, “Asians Working on Our Shit, And Owning our Power.” While their first teach-in, held in 2018, focused on learning and understanding the history of racism and migration, this second event engaged participants in deep conversations about the intergenerational legacy of anti-blackness. The event drew over 100 people, including young children, who gathered to learn in community.

Chang, who also brought her son to the event, spoke to the power of inviting young children to be a part of this healing conversation.

“It was powerful to see the next generation being involved in this work. They are already absorbing these lessons. Where else are they going to learn this? Our schools barely teach about what racism looks like, let alone what cross-racial solidarity looks like.”

In addition to the teach-ins, Seattle Asians for Black Lives have engaged in a range of actions designed to show solidarity to the black community. In fact, last Tuesday, many members joined the Rally to Free the Youth! march, organized by the No New Youth Jail Coalition to protest the new King County jail.

While their work is primarily located in Seattle, the recent failure of Washington’s I-1000 referendum signaled a need for the organizers to work in other parts of the state. A small group of conservative Chinese organizers, residing on the Eastside, worked tirelessly to organize against the passage of the bill despite clear data highlighting the detrimental impact to the Black community.

“It’s easy for them to engage in one narrative and that’s what they know,” she shared, acknowledging the need for them to work with Asians outside of Seattle.  “We also want people to know that they don’t speak for us.”

Some of the most significant work they are doing may be the racial healing work that Seattle Asians for Black Lives are doing amongst themselves.

One example, a generation ago, Bob Santos – “Uncle Bob” to hundreds of Asian and Pacific Islander Americans (API) – showed up within Seattle’s communities of color and led and inspired cross-racial solidarity. Santos participated in the 1960’s efforts to end redlining and later focused on redeveloping the CID and inspired a generation of progressive API leaders. His legacy continues in cross-racial relationships that remain today. He would be proud of the depth of the analysis that is taking place with Seattle Asians for Black Lives and would probably be right in the middle of the action of his grandchildren’s generation.

Building on the legacy of Uncle Bob, Chai added that, in her opinion, “ Asian people need to hold each other accountable for anti-blackness; build relationships in which we can talk honestly about our relationship to blackness and address any fear, anxiety, entitlement, or cultural appropriation that comes from our socialization as Asians and model minorities in America/Seattle. Hopefully this would help our community become less likely to harm Black folx and then require their labor later of correcting and educating us.”

She also named a number of ways she believes their work is connected to racial healing. “accountability for the harm we’ve caused. Freedom from and to question our socialization as Asians, as model minorities, as “the exception to the rule” and story of racial oppression. [Its] necessary to build and (re)establish trust amongst communities of color. Cultivate patterns and relationships of mutual aid, care, support, solidarity.”

As Seattle Asians for Black Lives continue to engage in their healing work, both Yu and Chai had specific messages to share.

To the Black community: “Sorry it has taken so long to get organized. Thank you for giving us so much grace and patience,” expressed Yu.

“Thank you for continuously calling us in to do this healing work and telling us when we have caused harm. There are those of us who are listening, learning, and committing to doing better,” said Chai.

To the Asian community, Chai had this to say: “We have healing work to do. Are you down? You are wanted and needed.”

Learn how you can support the work of Seattle Asians for Black Lives at Northwest Detention Center (now Northwest Processing Center) here.

Melia LaCour is a columnist for the Emerald and the Executive Director and Founder of “Becoming Justice.” She identifies as mixed race, Black and her work is rooted in the belief that racial healing is a critical component of racial justice work. She is a native Seattleite with a passion for justice, writing and karaoke.

Featured image is a cc licensed photo attributed to Marcela