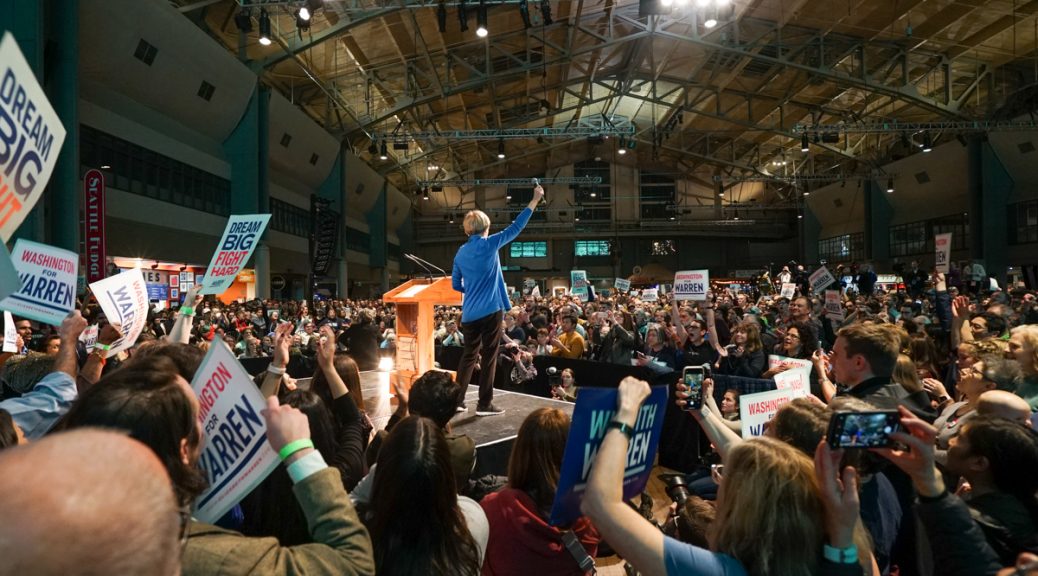 After months of trying to convince every progressive I met to vote for Bernie Sanders, I went ahead and cast my primary ballot for Elizabeth Warren yesterday. And it wasn’t because she gave a sexist, racist, billionaire hell on national television (though that didn’t hurt). And it wasn’t because my four-year-old son heard her on the radio, asked who she was and then announced, “But women aren’t presidents” (knife through my heart that it was). It was because of something that happened to me on a delivery table back in the winter of 2015 and a video that Warren posted last week about the maternal mortality crisis and race inequity in perinatal health.˛

But before we get into that, let me just get this out of the way, I always vote for the most progressive candidate I can get my hands on (Nader 2000 anyone?) and am a huge fan of Bernie and any candidate that talks about “Democratic Socialism” during primetime. But this election cycle I’ve been intimidated to follow my lefty heart where it might lead, instead twisting up in knots over the “electability” issue. I even caught myself saying to a friend, “Warren is my number one, but a woman is too much of a risk.” Assuming, as Naomi Ishisaka at The Seattle Times put it in her recent spot-on column, “You can’t be elected because you aren’t ‘electable,’ you aren’t perceived as electable because nobody like you has ever been elected.”

So what does all of this horse-race-hand-wringing have to do with maternal mortality? Last week the Warren campaign posted a video featuring Black women describing their own traumatic birth experiences and mistreatment at the hands of a sexist and racist medical industry. As I watched it, my eyes burning and throat constricting, I knew I had to vote for her.

Up until the early 1930s in the US one in every 100 women died from childbirth related illness and injuries, at least one of my great grandmothers did. And while those numbers have improved, it’s still the 6th most common cause of death for young women in this country. And the death rate is three times higher if you’re African American or Native American woman. I am a white, middle-class woman who experienced a traumatic birth and subsequent mistreatment at the hands of an apathetic and sexist medical industry. It was such a defining experience that I’m now in graduate school to become a perinatal mental health counselor. And let me be clear, I am extremely privileged in my experience compared to so many others—including high-profile Black moms like Serena Williams.

While a handful of the current candidates have sounded the alarm about perinatal health, maternal mortality and racism in healthcare, only Warren has made it one of her priority issues. And you know why? Because she can relate, too. Here — like with her stance on sexual harassment in the workplace, education, healthcare, the environment — her gender shouldn’t be  a liability but a cause for celebration and solidarity.

Now I know Warren isn’t perfect, she’s as problematic as any other white candidate trying to “out ally” the next. One of the cringiest moments of the South Carolina debate last week was watching seven white people talk about how concerned they are about the African American experience. But isn’t that just further proof of how committed we must be to representation in politics, no matter our fears that other voters won’t follow? So that more people can feel seen the way I did when a candidate for president of the United States, during a national debate, talked about pregnancy discrimination she had personally experienced? So that when my son stated matter-of-factly that a woman (and a former Harvard professor, and a Senator and a brilliant person and badass vision in fuchsia) couldn’t be president, I could look him in the eye and say, “Not yet Malcolm. But soon” and really believe it.