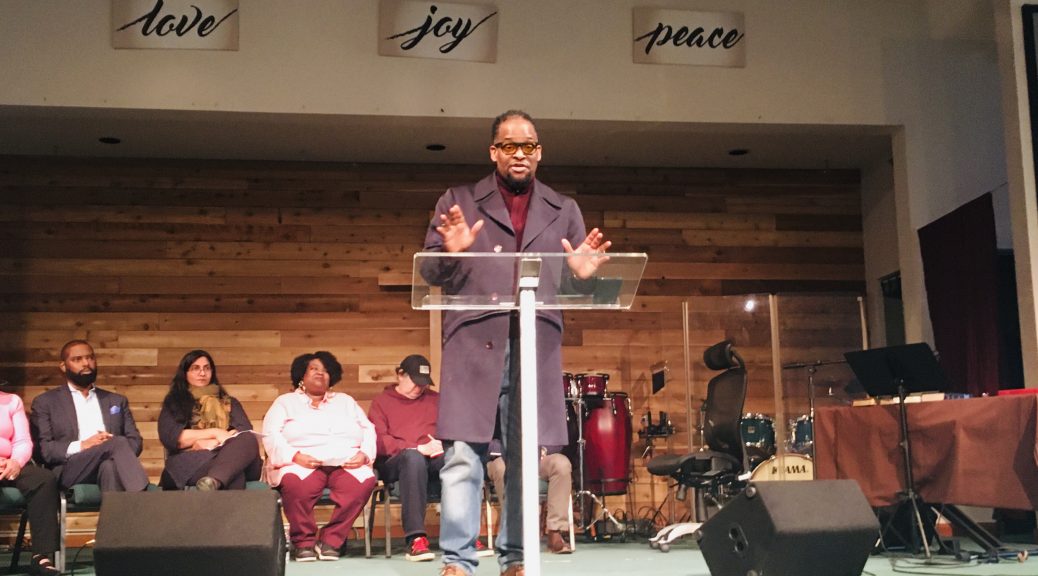 When two Seattle bike patrol officers busted Andre Witherspoon for selling drugs, then said they would let him go if he agreed to enroll in a program, Witherspoon initially said no.  “I said, I can’t agree to that—I’m not no snitch,” he said Monday. When the officers explained that the program could get him help with his drug addiction and get him into housing, Witherspoon signed up.

At the time, he said, “I was just thinking, this’ll be my way out. … Later on, I discovered it was a good choice, because  the program was very, very helpful.”

The program was LEAD—Law Enforcement Assisted Diversion—and it has helped hundreds of Seattle residents involved in low-level criminal activity get out of the criminal justice system and into housing, health care, and recovery. Last year, the city council approved (and Mayor Jenny Durkan signed) a city budget that included about $6 million in funding for LEAD—enough to reduce caseloads and expand the program, and $3.5 million more than Durkan proposed in her initial budget.

In January, The C Is for Crank reported that the mayor planned to hold back the additional $3.5 million until consultants from the New York-based firm Bennett Midland could complete an $86,000 evaluation. The goal of that evaluation, according to the mayor’s office, is to “surface best practices,” come up with performance standards, and decide on appropriate caseloads for LEAD. The program has been emulated around the country; its founder, Public Defender Association director Lisa Daugaard, just won a MacArthur “genius grant” because of her work on LEAD. Daugaard has said that without a signed contract that guarantees full funding, LEAD will have to start shutting down offices and stop taking on new clients.

Last week, Durkan sent a statement to reporters saying that the city “fully expects to contract to LEAD for $6.2 million in services and has been working for months collaboratively to receive important information such as their budget.”

However, Daugaard says the mayor’s office and LEAD remain “at an impasse,” and on Monday, former clients, staff, and supporters of the program held a press conference in Rainer Beach to urge the mayor to release the funds. In addition to Witherspoon, the speakers included city council member Kshama Sawant, who said that if the mayor doesn’t sign LEAD’s contract, she will consider proposing a supplemental budget amendment. “I hope the mayor doesn’t bring us to that point,” she added.

Durkan’s chief of staff Stephanie Formas says the city and LEAD are working on a letter of agreement about the contract, and that the contract itself is currently going through internal review by the Human Services Department. The letter of agreement is not standard for HSD contracts. Nor are some of the monthly and quarterly reporting requirements, including a requirement that LEAD provide an update every three months on client recidivism. LEAD says they have no way of providing this information, because the police department and county jail do not share that data.

“The mayor’s office is asking the LEAD project management team to provide data that only our local government partners have access to,” Daugaard says. “We urge them to obtain the data they’re seeking from the city’s own departments. We have requested access to those data for the [LEAD] database Microsoft is helping us build, and have been told that can’t happen. We need the government agencies we partner with here to prioritize this if it’s what the Mayor wants, and we have no ability to compel that.”

LEAD and the mayor’s office also have not reached an agreement on what “recidivism” means. This won’t make or break the current contract negotiations, but it could be an issue in future evaluations of the program, since recidivism is on a list of reporting requirements for LEAD—along with “housing placements,” which remains on the list despite the fact that LEAD is not a homelessness program and serves many non-homeless clients.

At the press conference Monday, Witherspoon said that “the primary reason why many addicts slide or relapse is because of the stress involved in just being sober”—finding stable housing, accessing medical care, and securing a legal source of income. LEAD walked him through all that, he said. They “helped eliminate that stress.”