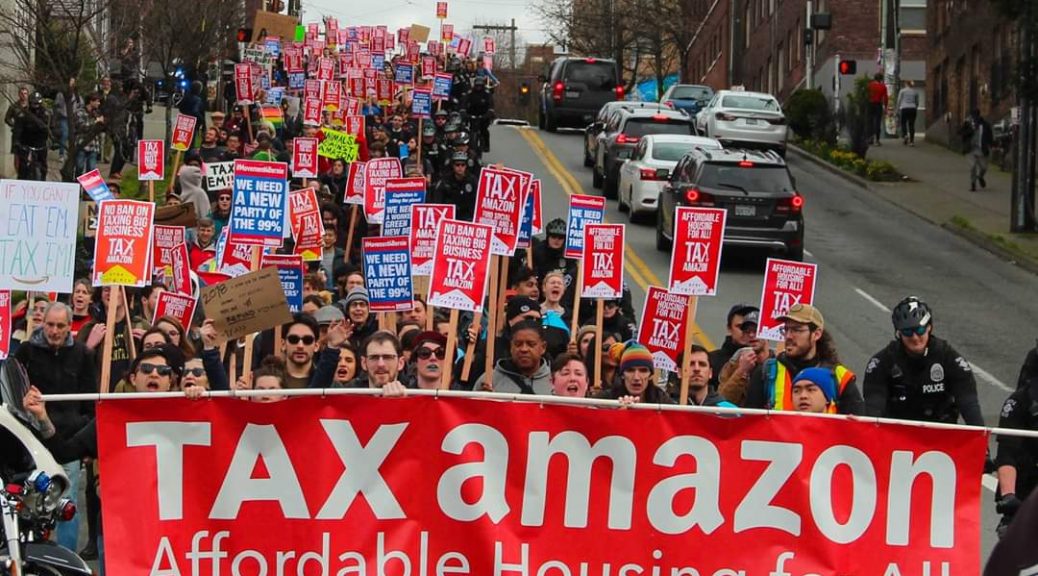 We the people are part of a broad and powerful Tax Amazon Movement. Why am I, a faith leader, actively participating?

In a word, it is LOVE. Love your neighbor as yourself.

In a word, it is JUSTICE. For Cornel West shares “Never forget that justice is what love looks like in public.” For I believe, those who lead the people need to love the people.

Can Washington state, with the most regressive tax system in the country, claim to love its people and say it is progressive?

In a word, no, unless our leaders will boldly advocate for progressive revenue that actually helps our working people and the most vulnerable.

That being said, let us consider an alternative vision. Instead of building highly-profitable luxury homes for the rich, providing affordable housing for working people and the most vulnerable.

Second, we need affordable social housing together with a Green New Deal. Social housing for thousands of neighbors each year that will provide quality jobs. Homes that we know will be green, energy-efficient, union-built, and affordable.

Third, the way forward is Tax Amazon and the biggest businesses not workers.

We know that if billionaires are able to spend millions and even billions on campaign ads, then the $300 million per year we, the people, are proposing for social housing together with a Green New Deal is practical. It is our way forward in dealing with our systemic housing and global climate crisis that impacts all of creation.

Why are we demanding that Amazon and the biggest businesses pay their fair share?

There is morally and ethically no other option but for them to pay their fair share. The reasoning behind this is that this is by far, the best and fairest way to have progressive revenue, so we have social housing and a Green New Deal in our state.

That is correct: Less than 1% of their revenue in return for $300 million per year in progressive revenue for social housing and a Green New Deal.

In response, the city formed a Progressive Revenue Task Force that recommended $75 million in taxes on big business to fund housing and services. Mayor Jenny Durkan actually cut that proposal down to $47 million, which the City Council adopted in May 2018. But only a month later, big business and their ally Durkan pressured the City Council to completely rescind this modest tax.

Last year, Amazon and big business attempted to buy the City Council elections with their millions of dollars. Because that was flatly wrong, and also because of the people’s movement, they were unsuccessful. City Councilmember Kshama Sawant was re-elected and the people’s Tax Amazon Movement won! Councilmember Tammy Morales, not supported by corporate PAC money, was also newly elected onto the Council, despite the fact that corporate PAC money was lavishly spent to defeat her as well!

Should you stop buying from Amazon, and boycott the company? Currently, we are not asking people to stop buying and boycotting Amazon. We stand with working people and their jobs. Amazon workers are actively in our Tax Amazon movement because they, their colleagues, and their families are threatened by economic eviction and burdened by staggeringly high rent.

Together, we have a way forward, and to move forward, we call on all people and every city, county, and state leader to be bold, to love the people, and to lead by joining our Tax Amazon movement. Don’t stand in the way of the people. Help us get Amazon and the biggest businesses to pay their fair share for social housing and a Green New Deal.

Seattle has historically been a progressive city. Let us not allow the very rich to hijack Seattle to make it a city for just the very rich. Seattle is of, by, and for THE PEOPLE.

Grace and peace be with you as together, we make this a reality for the people.