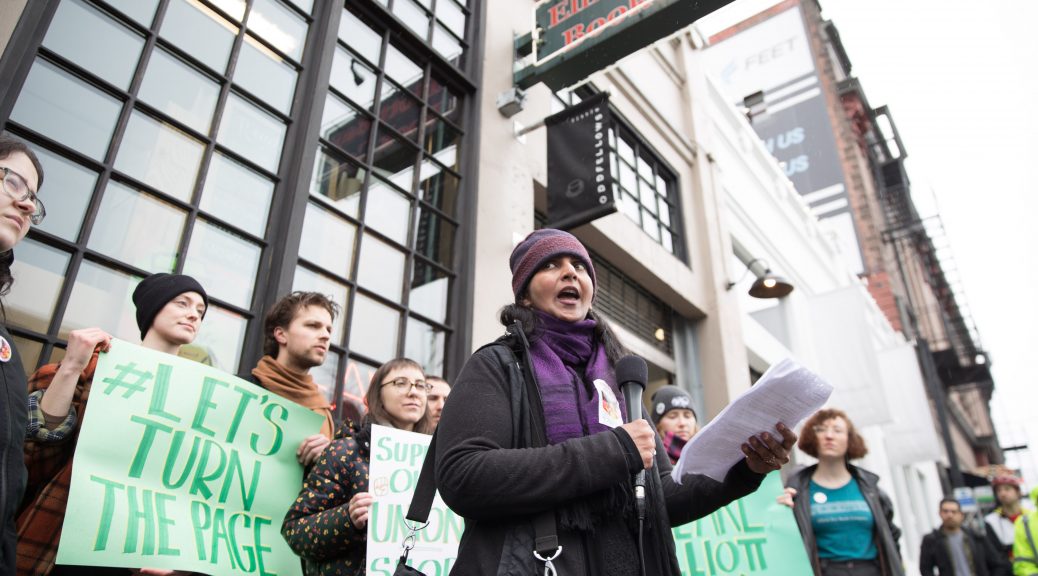 by Alex Garland (words and photos)

A constantly shifting set of rules and regulations for small businesses in the midst of a global pandemic and an important step forward for its workers’ labor rights has made a very unique situation for one Capitol Hill business.

Elliott Bay Book Company, the most prominent shop in Capitol Hill’s independent retail scene, is closed to the public and moving its sales to phone and online only through March 31st to do its part to help slow the spread of the COVID-19 virus. But it is also the center of what could be a big change for labor rights for Capitol Hill retail workers.

Friday, a small group of current and former Elliott Bay employees announced the formation of the Book Workers Union. And, unlike many other small, local efforts around unionization, they announced they were moving forward already recognized by management.

Joined by Seattle City Council member Kshama Sawant, Schear also made it clear the independent book retailer was ready to work with the newly formed effort.

“The management and owner, Peter Aaron, has formally recognized our union,” he said. “We are a union shop! We worked very closely with managers at Elliott Bay and we’re excited that they recognize what a thoughtful and talented staff they have who keep every aspect of the store running.”

Now the sides will need to set about bargaining “for a fair contract on behalf of the employees of the Elliott Bay Book Company,” the union said in a press release.

In its announcement, the Book Workers Union set out its objectives. “The union’s members believe a bookstore is much more than a retail space, and they will work to make sure Elliott Bay’s role in the community reflects the values and character of its staff,” it reads —

The union hopes to make Elliott Bay a more diverse and democratic workplace that offers its employees trust and transparency, a place where going above-and-beyond is not simply expected but encouraged and rewarded, a place where ideas are implemented and talents utilized. It will bargain for strong health insurance, paid parental leave, and competitive wages so that the bookstore can lower the turnover rate, spend less time running to catch up with business demands, and spend more time finding ways to increase customer and employee engagement. The booksellers are also seeking increased retirement benefits so those who choose to spend decades enriching our workplace can one day pass the torch without fear of destitution.

Before the announcement, Schear spoke with CHS. “Obviously there are extenuating circumstances right now with the Covid crisis that we are experiencing. We want to start with immediate concerns that people have including sick time, potential staff reductions, having a say over whatever course the bookstore needs to take at this time,” he said. “Those are negotiations we’ve asked for to begin immediately and management has been incredibly receptive with that.”

“I acknowledge and support the right of workers to organize, and as such recognized the Book Workers Union without hesitation or reluctance,” Peter Aaron tells CHS about the development:

As we prepare to begin the process of negotiating a collective bargaining agreement, I am looking toward positive outcomes. The booksellers are unified, and a unified staff is a good thing for the store, our customers and the community at large. Additionally, the union has expressed a strong devotion to the wellbeing of the store. Since we share this dedication, I have every reason to believe that we can proceed amicably toward a mutually-satisfactory agreement which will ensure and enhance the vitality of the store.

“I’m looking forward to working with the union’s representatives toward reaching that destination,” Aaron said.

The Elliott Bay union effort follows the formation of other small labor organizations around the city. Not every effort has been so warmly received. On First Hill, the Frye Art Museum has found itself in the middle of labor pushback after refusing to voluntarily recognize the formation of a union to represent the venue’s employees.

Sawant acknowledged the Elliott Bay unionization is coming at a unique time for the store and the city’s small businesses.

“If you have a little bit of touch with reality right now, you will recognize that it would be seen in very negative light to not recognize a union in the middle of a pandemic and I welcome that news, but I also want working people everywhere to know that some of our battles will be easily won like this one, most battles will be hard fought,” she said “That’s what history shows us, the bosses that own all the money and the power are not going to relent easily. It’s important that the workers made a distinction between small business like this one and corporations like Amazon where the fight will look entirely different.”

Seattle City Hall is expected to announce efforts to protect commercial tenants from eviction this week. Mayor Jenny Durkan previously announced a plan to put a moratorium on residential evictions in place.

“It has given me so much pleasure to see the Elliott Bay Bookstore workers organizing, because it is not only a glimmer of hope in these bleak times during a global pandemic, but politically and strategically, this is pointing in the right direction,” Sawant said. “It’s workers that need to get organized and build their collective power to immediately make sure that the burden of this crisis does not land on those of us who are already marginalized in the system of capitalism. Unionizing, actually happening in the middle of a pandemic, for me, as a rank and file union member and a socialist, is incredible.”

Because of the CDC’s increasingly strict guidelines for social distancing, Elliott Bay Book Company has decided to close its doors until March 31st “and will evaluate whether we need to extend the closure at that time,” Aaron said in an email to customers. While the physical location is closed to the public, Elliott Bay and its newly unionized workers are “in operation to fulfill internet and phone orders”.

Elliott Bay Book Company is located at 1521 10th Ave. It is currently closed to the public through the end of March. You can learn more and order online at elliottbaybook.com.