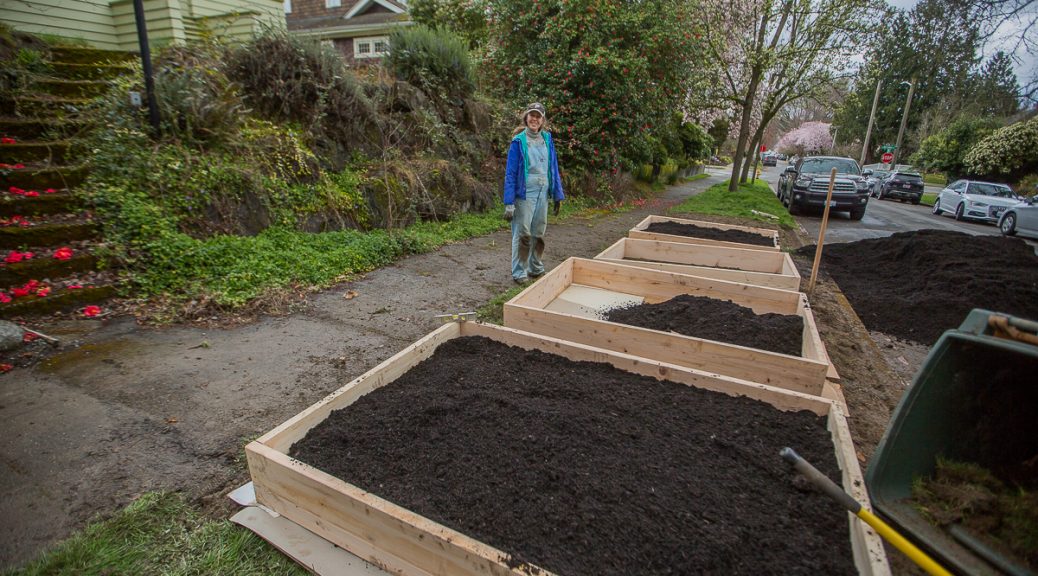 Anne Miller paused, wiping off the dirt from her gardening gloves onto her overalls.

“It’s not my best look,” the South Seattle Climate Action Network co-founding member said with a chuckle and a glance down at her clothes, before layering more cardboard into the open bottoms of one of the five new ground-level garden beds she and her neighbors have been setting up for the last several days.

With the physical and financial help of at least 15 other people, including the neighbor who offered the strip of space in front of his house to create the garden on 33rd Avenue South in South Seattle, Miller has started up a community garden on her block. Like the rest of the nation, Miller’s neighbors and friends have been affected by the COVID-19 outbreak, and she wants to help support those in need, during what’s proving to be a difficult and frightening time for many.

In between layering cardboard and loading dirt into the garden beds, Miller said she was inspired to create the giving garden from what she read on Nextdoor, a website that connects people in the same neighborhood. Other communities have had these kinds of gardens for a while, she said, and they’ve been able to give thousands of pounds of fresh produce to their local food banks.

“Joyce Moty, she’s been awesome, she’s been helping so much, and giving me advice,” Miller said, referencing the P-Patch Site Coordinator of Mt. Baker’s Bradner Gardens Park, a South Seattle-based P-Patch community garden space. “Last year, she said she got 1,200 lbs. of food out of it. She said that it was, all told, the space that, probably, we’ll have.”

Miller said it cost about $125 for the material to create all of the boxes, which a gardener from Bradner Gardens Park built for the project. The rich, fragrant mulch, a combination of Cedar Grove compost and Moo Doo compost, cost $315. She hopes the garden will support a wide variety of vegetables, including squash, carrots, kale, chard, and onions, as well as herbs like basil and parsley. She’s also hoping for a few flowers.

The garden consists of four boxed beds and one open bed without a border around it. Miller said that this last open bed is deliberate, because she wants to show people that they can do this, without any boxes, if they are interested in creating a similar garden.

“You flip the soil –– that’s these right here,” she said, tapping blocks of freshly turned earth with the toe of her muddy gardening boot. “We cut the sod, as you can see, into these blocks, and then flipped them.”

She paused to wave hello to her husband and other daughter, as they took the family dog out for a quick, pre-rainshower jaunt around the neighborhood, before continuing: “And then we are going to do the same thing: cover it with cardboard, put mulch on top. Still trying to figure out how to deal with the sides, because we are not going to have edging on it. Pathways, also, and … probably some kind of bamboo slats in between, just to keep the dogs from going into that area, and then something around the edges of it. And that’s it!”

Miller said another neighbor down the street has already been inspired to create another area community garden. Because she sees families already struggling to put food on the table, right now, she hopes that the idea will spread throughout more of Seattle. She also wants to see if areas of publicly-owned land can be turned into gardens.

“I love the idea of more giving gardens … throughout the neighborhood,” Miller said. “There are so many planting strips on city-owned property, so, why not? … It is publicly-owned, so it should be used for the public good.”

Miller said that if people want to help with the garden, they may contact admin@southseattleclimate.org. For those who are interested in starting their own gardens, check out this Old Farmer’s Almanac article.

Note: Interested helpers should be aware that since the planting strip is part of the public right-of-way, they’ll need a free permit before they get started and make sure that they’re following certain guidelines to ensure adequate visibility/safety for pedestrians and others. Information on the free permit can be found on the Seattle.gov website.

Featured image: Anne Miller pauses in her work of setting up community garden beds on her street in Seattle, Washington, on March 25, 2020. (Photo: Carolyn Bick)