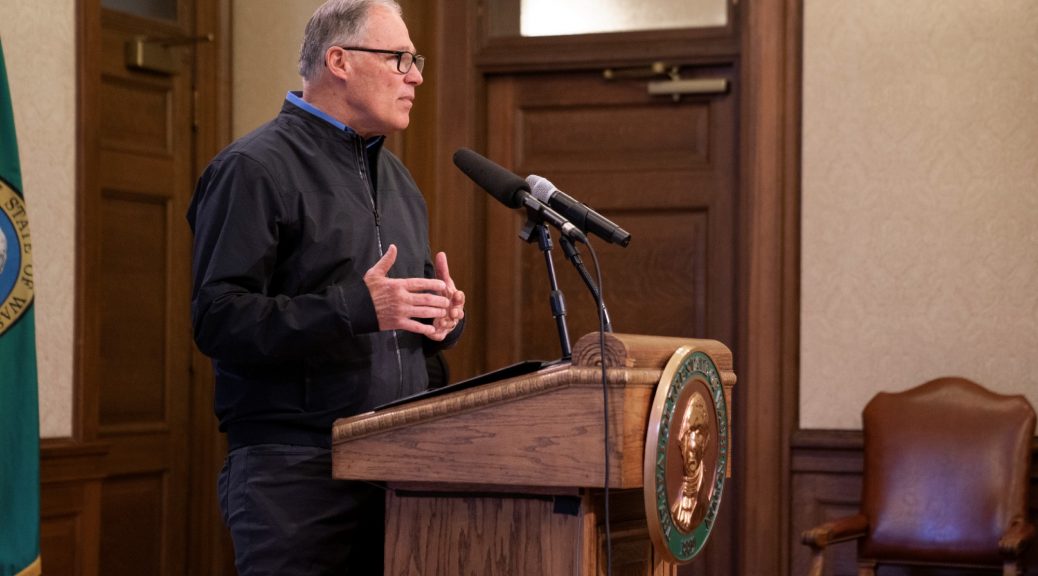 Though he didn’t formally commit to an extension of the current emergency stay-home order or the current eviction moratorium, Washington State Gov. Jay Inslee said in a televised press conference on April 1 that an extension on both remains likely. He also said the state’s manufacturers need to step up in the fight against the virus.

“We know this month could be decisive in this effort, both in terms of our nation’s response and our state’s response against COVID-19. This is, perhaps, the decisive moment that we are facing,” Inslee said.

Inslee pushed for the state’s manufacturers to become “soldiers” in the fight against the novel coronavirus, invoking the state’s history of manufacturing crucial supplies in WWII. Because President Trump has only invoked the Defense Production Act for ventilators, Inslee said that there is a dearth of other needed supplies, such as personal protective equipment (PPE) like masks, surgical gowns, and face shields, as well as testing kits and their component parts.

By way of example, Inslee pointed to Outdoor Research, which he said has committed to making surgical masks to the tune of 100,000 masks by the end of the month, and said that other manufacturers in the state should follow the company’s example. He added that just because a company cannot produce all of a kit or a face shield, for instance, does not mean they shouldn’t produce at least part of the needed supplies.

While Inslee made it clear that the state will not be waiting on the federal government for a response, more supplies, or for President Trump to extend the Defense Production Act to other critical equipment, he once again called on the president to listen to Republican and Democratic governors from across the United States, who he said have been “pleading” with President Trump for more supplies.

“I’m asking the president to pitch in by invoking the Defense Production Act, which will order companies to maybe make a few less toys and a few less dishes and a few less cupholders, and start making this life-saving equipment,” Inslee said. “Now, the president has not done that yet. … I hope, eventually, he will do that. The sooner he does that, the better off we will all be.”

Inslee also briefly spoke to issues concerning homeowners and renters. For those homeowners who are experiencing difficulties keeping up with their mortgages, right now, he said the Department of Financial Institutions is giving guidance to companies that serve mortgage providers to work with homeowners on payments. This includes mortgage forbearance.

While Inslee did not commit to extending the month-long eviction moratorium, which expires in mid-April, Inslee said that it is an option that remains likely, in the face of the current viral trend and possibility that the stay-home order will have to be extended. He also said that Attorney General Bob Ferguson’s office “will be active,” if renters are found to be treated unfairly. Renters concerned about their status or their landlord’s current policies should contact Ferguson’s office using this form.

Inslee also provided updates on the state’s National Guard response to aid food banks. Because food bank volunteers have had to stay inside, due to their vulnerable status, he said, 130 members of the national guard will be replacing those workers. The National Guard is not a part of stay-home order enforcement.

The state’s webpage tracking coronavirus infections and deaths from the virus’ corresponding illness, COVID-19, is experiencing technical difficulties. As of 11:59 p.m. on March 28, the number of coronavirus cases in the state stood at 4,896, and deaths were listed at 195 people. However, during the April 1 press conference, Inslee said that at least 200 people have died, thus far.