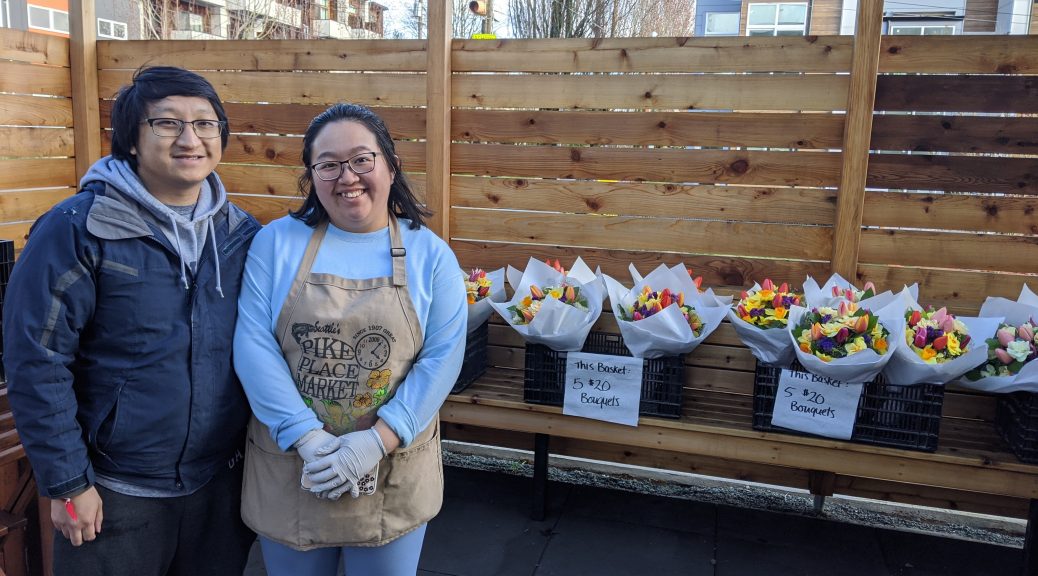 Sheltering in place at her home during the coronavirus pandemic, Callista Chen was scanning the internet for ways to help struggling businesses in the International District.

That’s when she stumbled on the tulips.

Chen, who lives on Beacon Hill, had been regularly visiting the Facebook group Support the ID, seeking out tasty restaurants for takeout orders, and finding other ways to support the beleaguered neighborhood during the COVID-19 outbreak. Not long ago, Chen noticed a post from a flower grower named Nikki Cha, whose family-owned flower-growing business, Blong’s Garden, was in trouble. After Gov. Jay Inslee’s stay-at-home order, their stand at Pike Place Market had virtually no customers, and the closure of farmers’ markets across the city had devastated their sales.

Chen messaged Cha. “I asked if she’d be willing to sell to people individually online,” Chen said. “And quite understandably, she said they could only do orders of $150 or more. And I thought, okay—I can’t buy $150 worth of tulips myself, but I could probably get 10 or 15 people to join together for an order.”

Shortly after posting a message to friends on social media, Chen noticed something surprising. She suddenly had $300 worth of tulip orders. “This is crazy, I thought,” Chen said. “And then we were at $600. And then $800.” A few days later, by the time she contacted Cha, the neighborhood group had pledged to order $1,000 worth of tulips.

Chen—who works for Reboot Representation, a non-profit that aims to increase numbers of black, Latinx, and Indigenous women earning computer science degrees—then donated her organizational skills to the effort. She coordinated the flower pick-up for a Sunday morning on the patio of her Beacon Hill home. Then Chen created a Google spreadsheet, helped get all the invoices to Cha and created a staggered schedule of pick-ups to meet social distancing requirements. That morning, she and Cha worked to bundle and label the rainbow-colored assortments of spring flowers.

“Most people walked to the pick-up,” Chen said. “Since there’s so little to do with kids outside now other than walking or biking, a lot of moms saw it as an opportunity to bring their kids along.”

The distribution went smoothly, and everyone who requested flowers paid for and picked up their bouquets. One woman even ordered more than a dozen bundles and dropped them off as surprise gifts on the doorsteps of her friends, Chen said.

Since that first order, Cha’s business has done several other group orders across the city. “Thanks to the neighborhood orders, posting on social media and receiving a lot of love from our local communities,” Cha said, “we are happy to say we are running low of stock in tulips. By next week, we should have more.”

Cha and her extended family are members of the Hmong hill tribe of Southeast Asia. They came to the Seattle area in the 1980s as refugees after the end of the Vietnam War. Her parents started Blong’s Garden in 1994, and now cultivate flowers and vegetables on 15 acres near Carnation.

“My parents are the All-Stars when it comes to farming,” Cha said. “They do it all—everything from planting, weeding and maintenance to plowing, picking, and upkeep.” Nikki Cha has been involved in farming since a child and now manages sales, marketing and communications for the business. She notes that more than two thousand people of Hmong heritage live in the greater Seattle area, and many of them farm vegetables and flowers in the eastside communities of Carnation, Fall City, Monroe, and Snohomish.

Blong’s Garden has rebounded from a 50% drop in sales since the stay-at-home order, and they’re working hard to get more online orders as the season shifts from tulips and daffodils to pastel-colored peonies later in spring. Cha is heartened by communities showing support for businesses like hers. “It gave us hope, increased our morale,” she said. “It made us realize that, yes, we can brace through this storm. But more importantly, it showed us the significance and impact a community can make in each other’s lives, when it comes together.”

“We will get through this together.”

To place a group order of flowers from Blong’s Garden, message them through their Facebook page or find them on Instagram at @blongsgarden.

Andrew Engelson a freelance journalist and editor who lives in the Othello neighborhood.