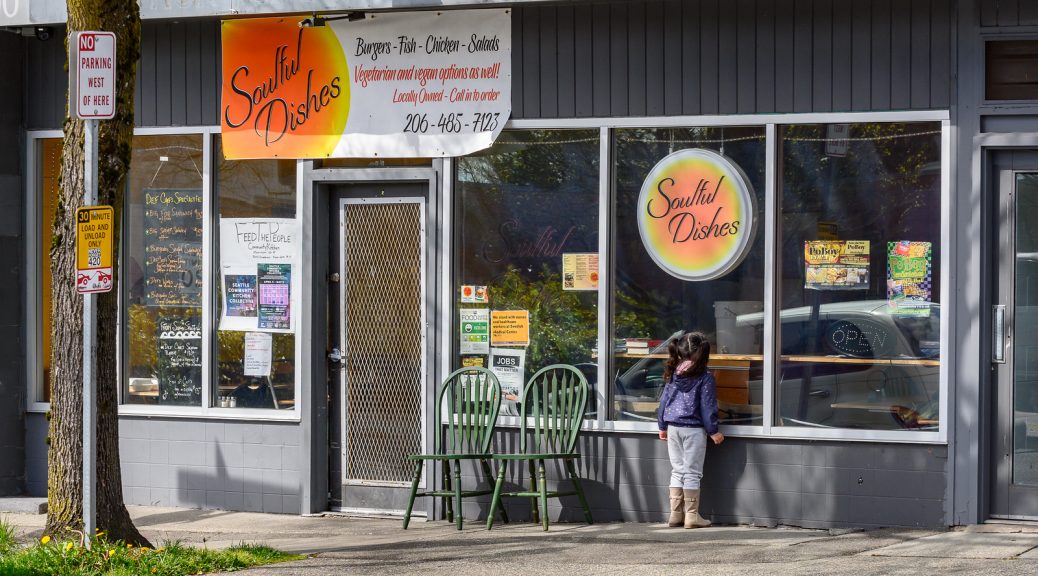 Governor Inslee’s March 16 mandate to close all restaurants, bars, cafes, and gyms as a way to slow the spread of COVID-19 has all but wiped out an entire industry. Even Seattle’s most prestigious eateries, including Tom Douglas’s restaurants and Renee Erickson’s Sea Creatures establishments, face uncertain futures. In Seattle’s South End, however, community-minded chefs, pop-ups, and restaurants have transformed temporary closures into a new grassroots collective that feeds neighbors in need. The Seattle Community Kitchen Collective is a group of chefs and restaurants providing free meals to whoever needs them, no questions asked.

Chef Melissa Miranda of Musang, the popular Filipino restaurant on Beacon Hill, was the first to transform her restaurant into a community kitchen. Although she’s only been in business since the beginning of the year, Miranda’s pivot to feeding the people was a seamless transition. “It felt natural. Everyone [in the collective], their hearts and their intentions are in the right place: It’s to serve people. We’ve always done that. It’s not like it was ever an idea that was restaurant-driven. We’re community-driven. I can say that about every person in the group,” Miranda said.

The Kitchen Collective includes Feed The People, That Brown Girl Cooks, Xpat Supper Club, and Guerilla Pizza Kitchen. It also has close ties with Hood Famous Bakeshop and Sugar Hill, which are making similar moves to support their communities.

For Miranda and the other chefs in the collective, feeding and nourishing community is part of their identities. “A huge part of why the collective has formed is because we’ve all worked together in the past. A lot of us have done actual fundraising events together,” Miranda explained. “For the past two years we’ve organized a fundraiser for RAICES. I think last year we raised almost $20,000. The year before we raised $13,000. A lot of the chefs, that’s how we met, through the first fundraiser we did.”

The Kitchen Collective chefs have also worked together in the past to host fundraisers for FEEST, Fare Start, and YouthCare. When COVID-19 began to spell trouble for Seattle restaurants, the chefs were already comparing notes. “We were all texting each other already,” Miranda remembered. “When this all started happening we were all asking each other for advice: what we were doing, where we were at.”

Right now, free meals are available for curbside pickup at Musang Sunday through Friday from 12 pm-6 pm. Some dishes include Pork Belly Adobo, Pancit Bihon, and vegetable hash. On Wednesdays at Musang, meals are provided by Christopher Morgan of Xpat Supper Club, and on Fridays by Cameron Hanin’s Guerilla Pizza Kitchen. They recommend calling in an order the day-of, or for pizza on Fridays, communicate through DM at @guerillapizzakitchen on Instagram to pre order, or call Musang on the day-of.

Chef Tarik Abdullah is working out of Jimaine Miller’s Soulful Dishes in the Central District as Feed The People, providing free meal boxes to those in need. Abdullah has over 20 years of food education with kids and communities. Feed The People’s mission is “to use food as a tool to bridge communities and to create, educate, and offer opportunities for our youth,” Abdullah said. “Underneath that we’ll have these platforms, the brunches, the pop-ups, the holiday feeds, where we feed anyone that wants a hot meal, and basically giving kids these opportunities through food.”

In their first week, Feed The People provided 500 community meals. Serving dishes like bread pudding, stewed greens, capetown masala and smoked chicken, Abdullah works with Kryse Panis Martin, Chef Ariella Bangs, and Chef Kristi Brown of That Brown Girl Cooks. Feed The People provides meals from 10 am to 6 pm Monday through Friday, and even offers  delivery for elders in the community from 2 pm-4 pm. Abdullah said people can simply knock on the door, tell them how many meals they need, and they’ll be given that many box meals.

In addition to perfecting her delicious black-eyed pea hummus while working at Capitol Hill’s Kingfish Cafe, Brown has over 30 years of professional cooking experience, including her own catering company, and a new brick-and-mortar store slated to open in the Liberty Bank Building. Brown recently started her own free meal pop up at 2822 Martin Luther King Jr. Way South, on Wednesday and Saturdays from 12 pm-6 pm. Dishes include her famous corn chowder, a roasted Fieldroast sausage jambalaya, and pork and onions sauteed in a tangy shakshuka sauce.

For the chefs and restaurants operating under the Community Kitchen Collective, feeding people simply doesn’t stop, even when a pandemic throws a wrench in the system. Guerilla Pizza Kitchen’s chef/owner Cameron Hanin described the sentiment best: “One thing I think we have in common in the Kitchen Collective is we believe in accessibility. Traditional fine dining is limited to one audience. It’s important to me that if my job is to feed people and take care of people, that means all people, not just people who can afford it the most.”

Right now, all donations can be made through the chefs’ personal Venmo accounts below, although a new, unified Kitchen Collective Venmo account is coming soon.

Mark Van Streefkerk is a Seattle based writer who lives in the Beacon Hill neighborhood.