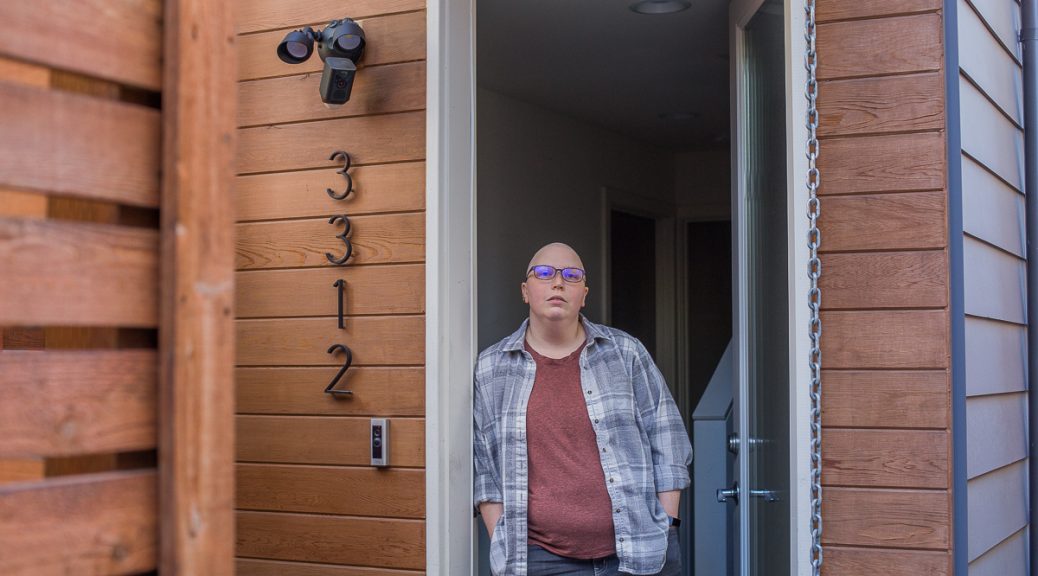 The hardest part of the week for Brandi Soggs begins on Thursday nights. That’s when the chemo she’s received the day before starts kicking in. It makes her tired and foggy, she said, and she doesn’t have the ability to put together even a basic protein shake, let alone stand in front of the whirring machine for the two minutes it takes to make one.

So, when her doctor told her she needed to be getting more protein to help rebuild her white blood cell count, Soggs donned her N95 mask and rushed out on the afternoon of Thursday, April 9, to get some premade plant protein shakes from Whole Foods. The shakes are some of the only food that appeals to her deadened taste buds and that she can keep down.

Soggs was in a hurry to beat the clock — a race against her body, before the inevitable chemo fog set in — so she couldn’t ask her limited contact circle to go shopping for her.

Soggs currently lives with her grandmother, an 80-year-old Floridian who flew in several months ago to stay with Soggs to be the 36-year-old woman’s caretaker as she undergoes chemotherapy. They usually go grocery shopping at Safeway or QFC together, during the stores’ immunocompromised hours, put in place to help those at high risk of dying from COVID-19, the disease caused by the novel coronavirus.

But her grandmother gets lost easily, and doesn’t like to drive.

She couldn’t ask the only other person she sees, her live-alone, work-from-home boyfriend, to get it for her, because he doesn’t have a car, and would have had to to take public transit. She also couldn’t ask her housemates, who live downstairs and whom she hasn’t seen since starting chemo, because she didn’t feel right sticking them with an unexpected outing.

Soggs didn’t expect the store to be very crowded — perhaps a few more people than she usually sees at other grocery stores, during their immunocompromised hours.

“The Whole Foods was a madhouse. It was awful. I would not go back there again. I was super-nervous the whole time,” Soggs said. “No one was going one way down the aisle. Everyone was just passing. Everybody seemed to be in a big hurry, and really didn’t care. Even the people who had masks on — they were acting like it was normal, and kind of in an angry rush. That was the most uncomfortable experience I’ve had, since COVID[-19].”

Soggs said the store restricted the number of people who were allowed inside at one time. But that didn’t stop those who were in the store from ignoring social distancing, she said.

As she waited her turn to choose milk, safely hovering behind someone else at the refrigerated section, a man jumped in front of her, brushing past her to grab milk and hurry away. Customers crammed up against each other in long lines, heedless of the exhausted employees, clad in masks and gloves, trying to keep everyone an appropriate distance apart. Only half the customers were wearing masks, despite the current Centers for Disease Control and Prevention guidelines instructing all Americans to wear masks.

“The funny thing is, before the virus, I had shopped online and would have my groceries put in my trunk, or delivered to my door or whatnot, but since the virus there are so many random shortages, and everybody wants the same service, that I actually have to go out, because I can’t be like, ‘Oh, if you’re out of turkey, please give me ham.’ If they’re out of turkey, you get nothing, and you wind up with a five-day wait to get half a grocery list,” Soggs said.

Soggs had also stopped seeing her friends well before Washington State Gov. Jay Inslee put a stay-home order in place. With her compromised immune system, it just wasn’t safe for Soggs to see anyone during cold and flu season. Diagnosed on Christmas Eve 2019, she has one of the most aggressive forms of breast cancer, after an unchecked two-month progression left Soggs with Stage Three of the disease, tumors invading her lymphatic system. Because of this, she also initially received one of the most aggressive forms of cancer treatment, doxorubicin, a drug so aggressive it’s called “The Red Devil” among cancer patients.

And while the drug did a good job of knocking out the cancer cells — she’s now down to getting a less aggressive form of chemotherapy every week, instead of doxorubicin every other week — it also damaged her healthy cells and immune system function. This means that Soggs, who also suffers from asthma, has a very high likelihood of dying if she catches the novel coronavirus.

That visit to Whole Foods didn’t just leave Soggs shaken and anxious. It also left her angry. She doesn’t know if she got sick from that visit. If she did, it means she’s not only putting her grandmother at risk, but also her fellow cancer patients.

“I would really like to go my entire life without hurting anybody — that’s probably impossible, but at least not hurting them or killing them, through my own negligence,” Soggs said.

But she won’t know for days, and the usual symptoms that apply to people suffering from the coronavirus have hit her, too, thanks to the chemo. Sore throat. Check. Bone-deep exhaustion. Check. No sense of taste. Check. The only thing she can rely on is her temperature, which she takes daily, and which is also checked twice when she goes for her weekly chemotherapy sessions at Swedish Medical Center in Capitol Hill.

Despite being in a hospital, the oncology ward is the public place Soggs feels the safest. It’s in a separate part of the hospital, and she doesn’t have to go anywhere close to the emergency room, where most COVID-19 patients first land. Moreover, the ward doctors and nurses are used to the kinds of extreme sterilization and distancing procedures, given that they work with immunocompromised patients all the time.

Some of these patients are even more vulnerable than Soggs. All things considered, her white blood cell count is “okay,” she says, likely because she is still young. Still, Soggs can’t skip her chemotherapy treatments. They’re the only shot she has at beating back this disease, and keeping it from reaching her lungs and liver. But she’s terrified she will accidentally kill someone, if she does get sick, and doesn’t show any symptoms, at first.

So, that day at Whole Foods, she was between a rock and a hard place. She would have been putting herself in danger, if she had left; other people were putting her in danger, because she had to stay.

“I was going [to Whole Foods], because that was my only window, to make sure that I got enough protein, to make sure that I’m not in a bad state for my next check-up — because then, my doctor has to see me more often, then I’ll have to go to the hospital more often to get fluids or extra treatment, if I’m not recovering well,” Soggs said. “Even if none of the other shoppers cared that much, somebody is surely going to get sick from that kind of thing.”

The behavior she witnessed has indirect repercussions for cancer patients, too. The more people ignore social distancing and Inslee’s stay-home order, the more people will get sick, cramming hospitals to the brim. This stretches hospital resources and keeps it unsafe to perform all but the most necessary surgeries. These necessary surgeries don’t include Soggs’ mastectomy, which she’s supposed to get in July, after she finishes her chemotherapy treatment. Because her doctor recommended chemotherapy before surgery, not getting her mastectomy right on schedule shouldn’t put Soggs’ life in danger.

“But the whole thought is scary,” Soggs said. “I am hoping that, worst-case scenario, for me, is that I have my mastectomy a little later than we’d hoped, because they have a bunch of backlog.”

That day in the grocery store tells Soggs that people just don’t care the way they need to. It’s a tacit way of telling her that they will allow her to die.

“That is the thing I hate hearing most. When anybody … talks about, ‘We should just let the virus burn through,’ … they are talking about, ‘That’s okay, I would rather kill you, personally, Brandi, than wear a mask in public,’” Soggs said. “Let alone all the stuff about, ‘Oh, yeah, well, they’re old, they’re gonna die, anyway. So what’s a couple years early?’ Which is disgusting, in its own right.”

A few nights ago, during one of her windows of lucidity, Soggs and her grandmother made chocolate-drizzled popcorn — popcorn is Soggs’ new obsession, thanks to Alton Brown’s easy, at-home quarantine recipe series. They watched a movie together on the couch — just the two of them, in self-imposed isolation, trying to keep each other safe.

Featured image: Brandi Soggs poses for a portrait in the doorway of her home in Seattle, Washington, on April 14, 2020. (Photo: Carolyn Bick)

One thought on “When People Don’t Follow Social Distancing Guidelines, It’s the Vulnerable Who Pay”