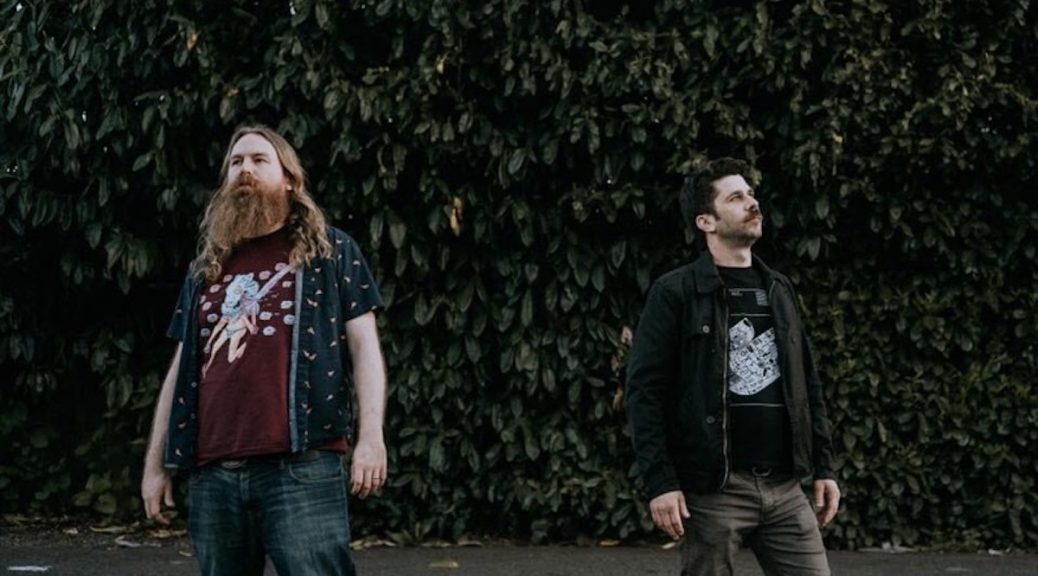 Clock-Out Lounge, home to Breezy Town Pizza, might be take-out and delivery only these days, but their weekly comedy show Joketellers Union hasn’t missed a beat, they just moved online. In fact, Joketellers just celebrated their two-year anniversary show via Facebook Live. The comedy veterans behind Joketellers, Brett Hamil and Emmett Montgomery, are making sure Beacon Hill’s much-loved neighborhood act continues to deliver laughs and connection in the new reality of quarantine and social distancing.

“We’re just trying to keep our little universe together while we’re all apart,” Hamil explained. “Trying to be a cultural touchstone that’s on the map for the south end, that’s really important to me. I really believe in the south end, and the people here, and the way we support each other.”

Reflecting on the state of local comedy, Montgomery said. “It’s scary right now because all ticket sales have been replaced with a tip jar. You want to take care of those that have been dependent on this ecosystem. We try to tip out bar staff, and pay our door people, and also pay comics.”

Since the stay-at-home mandate went into effect, the comics have released a live production every Wednesday at 8:30 p.m., same time as the Clock-Out shows, but on their Facebook page. Montgomery still performs against the gold curtain backdrop, but as a Zoom background. Other signifiers help maintain continuity, like starting out the show by checking in with Fefo, “the pizza guy” who announces Breezy Town’s weekly slice selection, and includes appearances from Dan Hurwitz, who does a monthly “hyper-local news segment.” Other shenanigans include Hamil’s character creation Burl Dirkman, who has “devoted his life to telling the world about the healing powers of babies,” Montgomery’s 14-year-old chihuahua Donna, and all the weird inside jokes you can imagine from a longstanding neighborhood act. The online, or “Home Edition” of Joketellers also includes archived footage of guest performers from the show’s over 100 episodes, featuring comics like Seattle’s Clara Puton, Portland comic Philip Schallberger, and many, many more. “We have two years of excellent stand up sets from people we’ve booked,” Montgomery affirmed.

In addition to Hamil, Montgomery, and guest comics, Joketellers also spotlights local politics and causes. Notable guests include Kirsten Harris-Talley, who is running for state representative of Washington’s 37th legislative district, King County councilmember Girmay Zahilay, and Kate Rubin, executive director of Be:Seattle, a grassroots organization that advocates for the rights of renters and our houseless neighbors.

Moving a live show online poses a new set of challenges. Hamil and Montgomery record the show via Zoom about an hour before the 8:30 showtime, with producer Andrew Seliber toggling between screens and cuing music. Instead of performing in front of live “Union members,” i.e., the audience, Hamil and Montgomery perform in front of their laptops. “It’s weird. The immediate laughter and response is kind of the rocket fuel of comedy. You don’t have that [anymore],” said Hamil.

Hamil and Montgomery have been involved in the Seattle comedy scene for around 14 and 15 years, respectively. Montgomery has several long-standing acts, Magic Hat and Weird and Awesome With Emmett Montgomery, that have both moved online. With COVID-19 disruptions weighing on Seattle’s artists, performers, and local communities, the two comics both note Joketellers Union has morphed into something unique. “We joke lately that we’re not even sure it’s a comedy show anymore. It gets really poignant and emotional sometimes,” said Hamil.

“What I’m noticing is we’re all in this state of forming trauma right now,” Montgomery observed. “There’s two ways to deal with that as a comedian. One is to provide escape for people. Fun, nonsense stuff. So when you’re talking about bidets and all that. Then you also want to lean in and let people know you understand. Sometimes part of comedy is taking unbearable things and pulling the teeth out of them so they can be manageable, but you have to figure out the right way to do it.”

Joketellers Union seems to be finding all the right ways to connect, and give an online community a chance to laugh every Wednesday night.

Mark Van Streefkerk is a Seattle-based writer who lives in the Beacon Hill neighborhood.